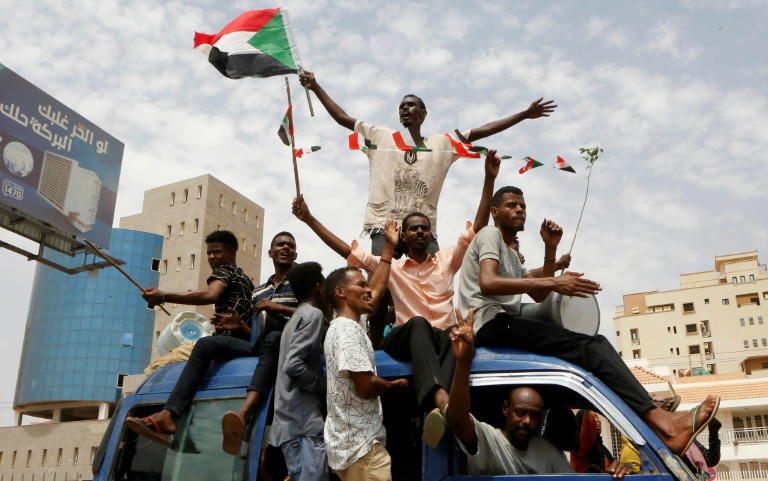 Crowds of jubilant Sudanese took to the streets of Khartoum on Friday to celebrate a landmark deal between protest leaders and the country’s ruling generals aimed at turning the page on months of political unrest.

The power-sharing deal, reached in the early hours after two days of hard-won talks brokered by Ethiopian and African Union mediators, came after previous negotiations collapsed in May over who should lead the new body — a civilian or soldier.

Sudan has been gripped by political deadlock since the generals ousted longtime president Omar al-Bashir in a palace coup in April following months of mass protests nationwide.

The group that initially launched demonstrations against Bashir in December hailed the agreement.

“Today, our revolution has become victorious and our victory shines,” the Sudanese Professionals Association said in a statement.

Tension between the two sides had soared after a brutal raid on a longstanding protest camp outside army headquarters in Khartoum that killed dozens of demonstrators and wounded hundreds on June 3.

Lebatt did not specify the exact make-up of the new ruling body, but prominent protest leader Ahmed al-Rabie told AFP it would comprise six civilians, five of them protest movement nominees, and five military representatives.

The SPA said the transition would last three years and three months, with the first 21 months presided over by a military nominee, and the last 18 months by a civilian.

UN chief Antonio Guterres called on “all stakeholders to ensure the timely, inclusive, and transparent implementation of the agreement and resolve any outstanding issues through dialogue”, his spokesman said.

Leaders from the umbrella protest movement, the Alliance for Freedom and Change, said later on Friday that the final agreement could be signed next week in the presence of regional heads of states.

They said the alliance would also be ready to name its candidates for the sovereign council and the prime minister by next week.

‘Blood not shed in vain’

People celebrated on the streets of Khartoum well into Friday, chanting “the martyrs’ blood has not been shed in vain” and “civilian rule, civilian rule”.

In Khartoum’s eastern district of Burri, a hotbed of demonstrations, 51-year-old Hannan said the residents had faced “difficult hardships” since the protest movement began.

“A lot of our young people were chased and beaten by the security forces,” he said, alongside family and neighbors at a gathering celebrating the agreement.

Mohamed, with the Sudanese flag painted on his cheeks, was hopeful about the future.

“One day, all the Sudanese who fled abroad will return to the country. And this country will then be a beautiful country,” the 19-year-old said.

The deal was hailed by the United Arab Emirates and Saudi Arabia, which have been sympathetic to the ruling generals.

“We hope that the next phase will be the establishment of a strong constitutional system that strengthens the role of institutions,” UAE minister of state for foreign affairs Anwar Gargash wrote on Twitter.

The Saudi foreign ministry called the agreement an “important step” which could pave the way for “a new phase of security and stability” for Sudan.

“This agreement must be judged by how those in power now live up to their responsibilities to respect people’s fundamental rights,” Amnesty’s Kumi Naidoo said in a statement.

Lebatt said the two sides had postponed the establishment of a transitional parliament.

Before talks collapsed in May, the generals and protest leaders had agreed on a 300-member legislature, with two-thirds of lawmakers hailing from the protest movement.

Lebatt said the two sides have also agreed to “a detailed, transparent, national, independent investigation into all the regrettable violent incidents that the country faced in recent weeks”, including the June 3 raid.

At least 136 people have been killed nationwide since June 3, including more than 100 on the day of the raid, according to doctors close the protesters.

The health ministry says 78 people have been killed nationwide over the same period.

The military council insists it did not order the violent dispersal of the sit-in, although witnesses have said the raid was carried out by men in military fatigues.

Special Report: Abandoned by the UAE, Sudan's Bashir was destined to fall