Facebook Twitter LinkedIn
Egypt’s Suez Canal revenues dropped by 5.3 percent in 2015 to US$5,175 billion, down from US$5,465 billion, Suez Canal Authority chief Mohab Mamish said on Wednesday.
Mamish attributed the fall to a steep decline in world petroleum prices to US$51 in 2015 and a current price of US$30 in January. He explained that the petroleum decline caused a parallel drop in the surplus accomplished by the canal.
He said that revenue, however, recorded an increase if the value is based on the International Monetary Fund’s Special Drawing Rights (SDR), which he said is the unit the authority uses to charge ships for passing fees. The canal made 3687.5 million SDR in 2015, up from 3590.7 million in 2014.
In 2015, 17,483 ships passed through the waterway, up from 17,148 in 2014, according to Mamish, who described the increase as “remarkable” given falling global oil prices and economic fluctuations.
Edited translation from Al-Masry Al-Youm
Tags
ministry of petroleum Mohab Mamish revenues Suez canal US dollar 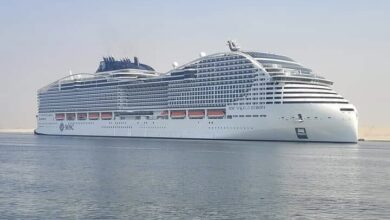