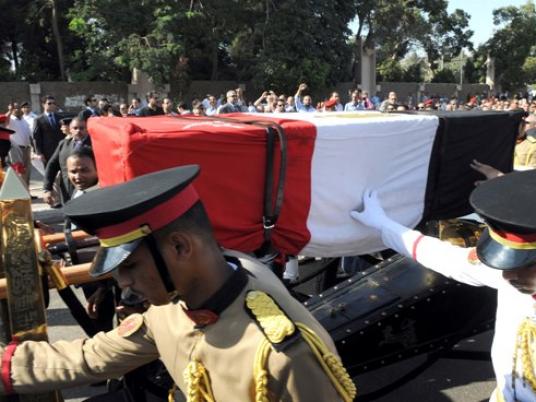 The death of Egypt’s infamous former spy chief, who was believed to hold more secrets about Egypt and its politicians than any other, was just as controversial and mysterious as his life.
Among faithful admirers and angry critics, Omar Sulieman was laid to rest yesterday, having died at the age of 76 a hospital in Cleveland on Thursday.
State-run Al-Akhbar reports that Suleiman’s funeral was both military and popular, led by Egypt’s top general Field Marshal Hussein Tantawi and his deputy Sami Anan and attended by thousands of Suleiman’s admirers.
The paper states that the funeral of the man known for leading the crackdown against Islamists in Egypt turned into an anti-Muslim Brotherhood protest as the mourners chanted against the group and recently elected President Mohamed Morsy.
The funeral put Morsy in a dilemma between his loyalty to the Brotherhood, which considers Suleiman one of its fiercest opponents, and his responsibility to attend the funeral of a member of the state he currently heads. Akhbar reports that Morsy skipped the funeral but sent a representative.
Privately owned Al-Tahrir reports that Suleiman supporters kidnapped Morsy’s representative in the funeral and trapped him in an apartment building intending to assault him, but the residents intervened.
The paper also says that military leaders tried, throughout a 90 minute meeting, to convince Morsy to attend the funeral to no avail. The paper reports that the funeral turned into a street fight between those taking part in the funeral and passers by.
State-run Al-Ahram, however, reports that the meeting was routine as part of Morsy’s following of the military affairs.
Privately owned Al-Dostour celebrates Suleiman, printing a list of what they consider to be his greatest accomplishments on the front page.
Among the paper’s picks of the former chief spy’s accomplishment is “cornering the Muslim Brotherhood and putting them where they belong, in prisons and detention centers.”
Some papers are also preoccupied with the cause of death of the controversial figure, which was announced to be a rare disease.
Privately owned Al-Shorouk explains the disease announced as the cause of death by the Cleveland hospital where Suleiman died. Amyloidosis, it reports, causes certain proteins to be abnormally deposited, affecting the organs.
Al-Wafd went for a conspiracy theory angle, with the headline “doubts around Suleiman’s death.” The paper reports that a lawyer submitted a demand to the prosecutor general to carry out an autopsy on the body. It also quotes an American professor as saying that the death is mysterious and should be investigated, especially as Suleiman held information that was dangerous to a lot of people.
Wael Kandil, Al-Shorouk's managing editor, staunchly criticizes those mourning Suleiman, calling them clowns in his column. He cites the words of Israeli Knesset member Binyamin Ben-Eliezer, who called Suleiman “the best of those who served Israel,” to demonstrate that the deceased did not serve Egypt as they claim.
Party paper Freedom and Justice has completely ignored the news of Suleiman’s funeral, leading instead with Morsy’s talks with Turkish officials about Syria.
Egypt’s papers:
Al-Ahram: Daily, state-run, largest distribution in Egypt
Al-Akhbar: Daily, state-run, second to Al-Ahram in institutional size
Al-Gomhurriya: Daily, state-run
Rose al-Youssef: Daily, state-run
Al-Dostour: Daily, privately owned
Al-Shorouk: Daily, privately owned
Al-Watan: Daily, privately owned
Al-Wafd: Daily, published by the liberal Wafd Party
Youm7: Daily, privately owned
Al-Tahrir: Daily, privately owned
Freedom and Justice: Daily, published by the Muslim Brotherhood's Freedom and Justice Party
Sawt al-Umma: Weekly, privately owned
Al-Arabi: Weekly, published by the Nasserist Party
Al-Nour: Official paper of the Salafi Nour Party