Facebook Twitter LinkedIn
When Dean Karnazes ran 135 miles nonstop across Death Valley during the height of summer, the heat was so intense it "caused the epithelia in my mouth and throat to slough off, like a reptile shedding its skin." 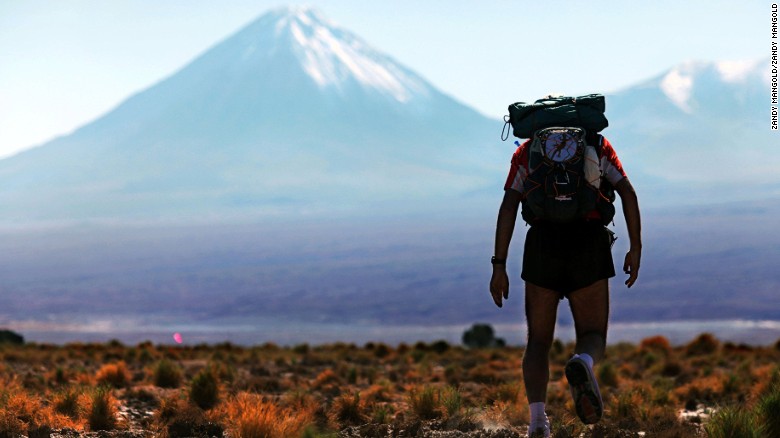 There are marathons, and then there are desert marathons. We take a look at some of the most extreme — and beautiful — foot races on the planet.
"I really enjoyed that race," adds the the legendary 53-year-old American runner.
Indeed, put Karnazes in 54C heat with a headwind like "the Devil's blowtorch" and blisters the size of marbles, and he'll happily tell you he's "never felt more alive."
This, afterall, is the "Ultramarathon Man" who in 2005 ran 350 miles nonstop for almost 81 hours — that's over three days without sleep (Karnazes later said he experienced bouts of "sleep running," where his body kept jogging while his mind napped).
A year later, he ran 50 marathons in 50 consecutive days, in each state of America.
Then there's the marathons across the Sahara, Gobi, Atacama, and Antarctica deserts; winning all four as part of the 4 Deserts Race in 2008. 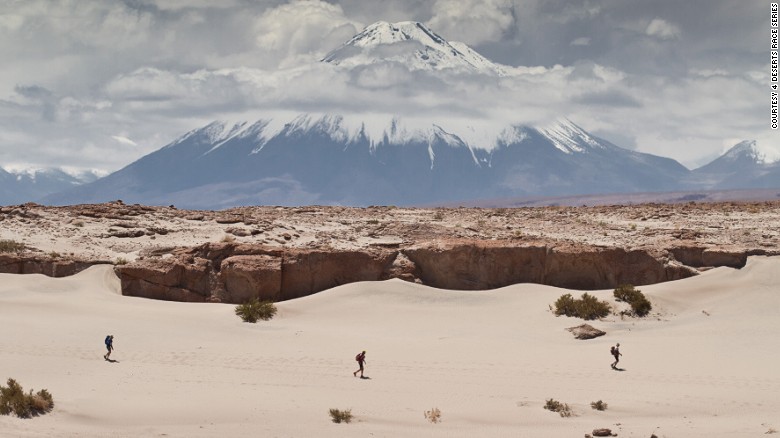 The spectacular Atacama Crossing in Chile is one of four marathons held as part of the 4 Deserts Race challenge.Those planning on completing all four races, must cover 621 miles, over 28 days, spread out across the year
.
Ahead of Oman's Desert Marathon later this year — 102 miles completed over six stages — we asked the author of "Ultramarathon Man: Confessions of an All-Night Runner," how he handles the heat, ordering pizza on the run, and why the next challenge will be his most ambitious yet. 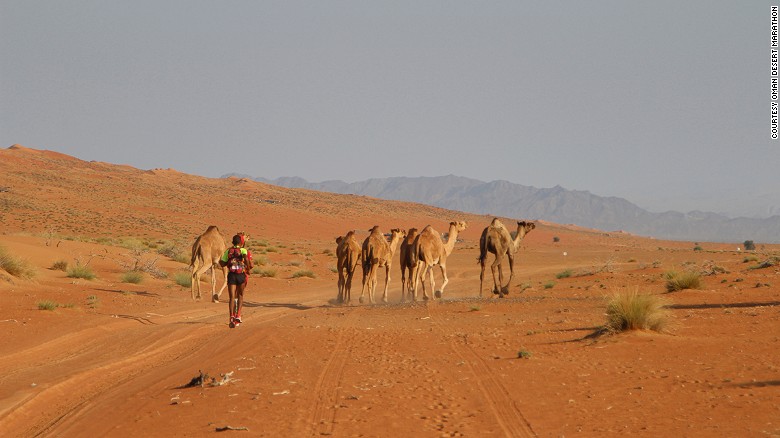 Following the ancient caravan route from East to West, the third Oman Desert Marathon will kick off this November, covering 102 miles in six stages. 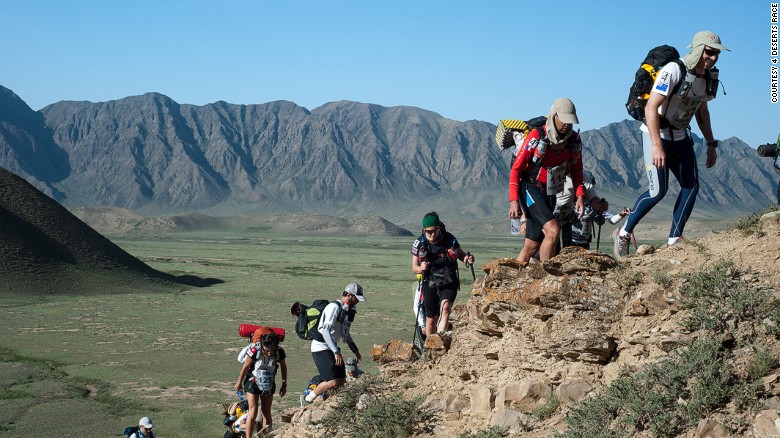 Runners also take on the Gobi March in China, as part of the challenge. Though it could just as easily be described as a climbing expedition, with the stunning Tian Shan Mountains as a backdrop.
Why do you run?
Running is the ultimate expression of human freedom. It makes me feel alive and connects me with who I am, and what I am.
What's something no one ever tells you about running in the desert?
That despite the heat and adversity, there's tremendous beauty to be found in these barren and inhospitable lands.
What are the most extreme conditions you've ever run in?
I've run 135 miles nonstop across Death Valley in the midsummer inferno during the Badwater Ultramarathon. Temperatures crested 54C and there was a hellish headwind, as though the Devil himself was holding a blowtorch in your face. Breathing that super-heated air turned my sinuses leathery and caused the epithelia in my mouth and throat to slough off, like a reptile shedding its skin. I really enjoyed that race. 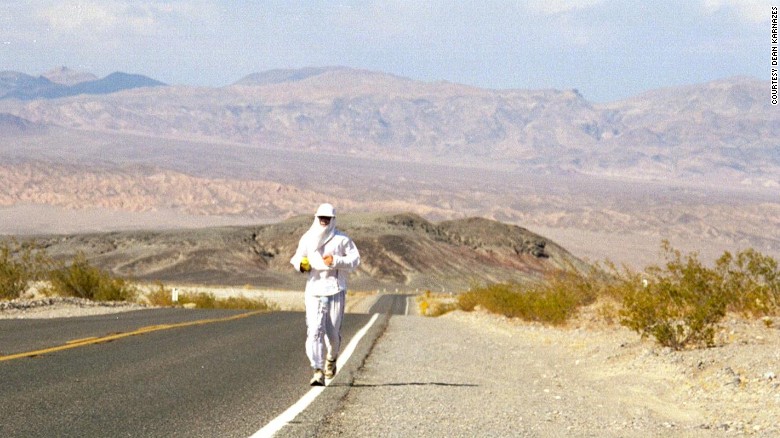 He might look a bee keeper on the run, but this is the UV protective outfit Karnazes wore during the Badwater Ultramarathon in Death Valley. 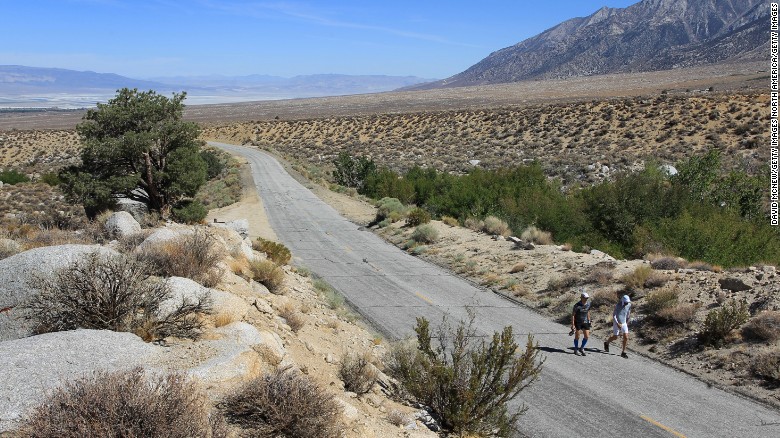 Describing itself as "The World's Toughest Foot Race" the Badwater Ultramarathon takes place in California's Death Valley at the height of summer, with temperatures often reaching 54C. Competitors must race 135 miles nonstop, with previous winner Dean Karnazes calling it: "A midsummer inferno".
What is your training regime for a desert marathon?
To help acclimatize for hot-weather conditions, I run in my big, puffy winter ski parka. This helps to elevate my core temperature and emulates the internal warmth you generate when running across the desert. I also do sets of sit-ups and push-ups inside the sauna at the gym. Sure, I get some funny looks doing these things, but I've learned to take the heat!
What's the best thing about running in the desert?
For those drawn to extremes, there is nothing like it. Running across Death Valley in the savage summer heat, or across the Atacama Desert in conditions that resemble Mars, is unlike any other earthly experience. Running across the desert allows you to escape from the world, but also intimately connected with it.
And the worst?
Probably the blisters. I once developed a blister underneath my big toenail the size of a marble. To lance it, I drilled a hole straight through my toenail using a syringe. Thankfully I'm okay with pain.
You once had a pizza delivered to you while you ran — what other unusual things have you eaten on the run?
I don't think I'll ever live down that pizza delivery story. I've also ordered Chinese takeout while on the run. Got the Kung Pao shrimp and just slurped it from the box as I ran. It was good, too. The sodium in the soy sauce helped replenish electrolytes. The only downside of Chinese is that I was hungry an hour later.
Is it true that you don't stretch?
One of my mentors, Jack LaLanne, once said: "Have you ever seen a lion stretch?" I take his advice. 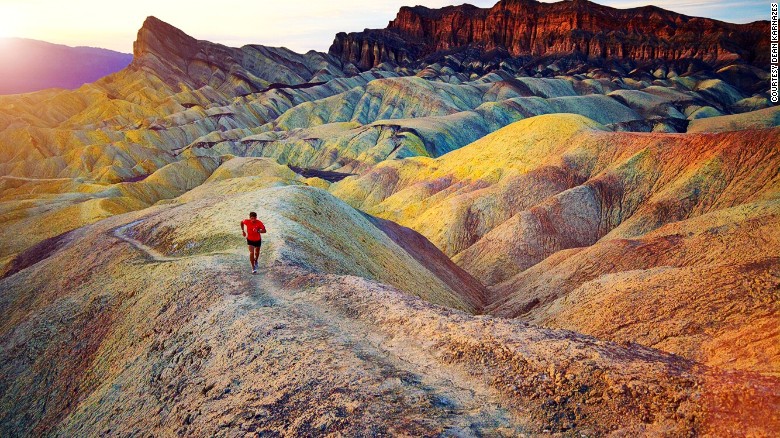 Sunset during the Badwater Ultramarathon is a sight to behold — if you can handle the pain.
Do you listen to music while running?
I listen to audiobooks. I've probably got 300 to 400 audiobooks on my playlist. I used to love reading, but when you're spending so many hours out training it's hard to keep up. Now I listen to books instead.
Tell us your toilet habits
I'll just say that it helps to be a male. When you're out on these long runs you don't want to stop or slow down, so you pull the little guy out from the side of your shorts and tinkle as you waddle along. I've become expert at it, not a single drop on my shoes.
What's in your backpack?
Energy gels, nut butters (almond's my favorite), and for all-night runs I have chocolate-covered espresso beans. They're the bomb!
What is your most expensive piece of running kit?
Probably my sunglasses. I take measures to protect my eyes since I'm out in the sun so much. That's one place I won't compromise.
What is the most helpful piece of running advice you've ever been told?
Listen to everyone, follow no one. We're all different and unique, so experiment to find what works best for you. Actually, that's my own advice, but I eat my own cooking and follow that advice.
How do you balance training time and spending time with loved ones?
What I've learned is that quality matters more than quantity. When we're together we really have a great time. We turn off the distractions and just focus on enjoying one another and having fun. If I were always around I don't think we could achieve this same level of closeness.
You once said: "Somewhere along the line, we seem to have confused comfort with happiness." What is happiness to you?
I once said: "There's magic in misery." Never do I feel more alive and in touch with myself and the universe than when I'm out running and struggling with pain and self-doubt, trying to persist against insurmountable odds. Comfort and contentment doesn't bring us fulfillment — overcoming adversity does.
What is your favorite surface to run on?
I love running on them all. I've run on pavement, grass, sand, snow, dirt, mud, ice and even water. Yes, I once ran over water in this contraption that resembled an inflatable hamster wheel. As long as I'm running, and not sinking, it's all good.
Where would you dream marathon be?
Funny you should ask. I don't just have one — I have 200! I'm planning on embarking upon a global expedition to complete a marathon in every country of the world in a one-year time span. I've been working with the US State Department and UN to get all the necessary passports and permits in place to be able to do this. As you can imagine, the planning and logistics are every bit as complex and difficult as the running itself. But I always encourage people to dream big, so I guess I'd better set a good example. 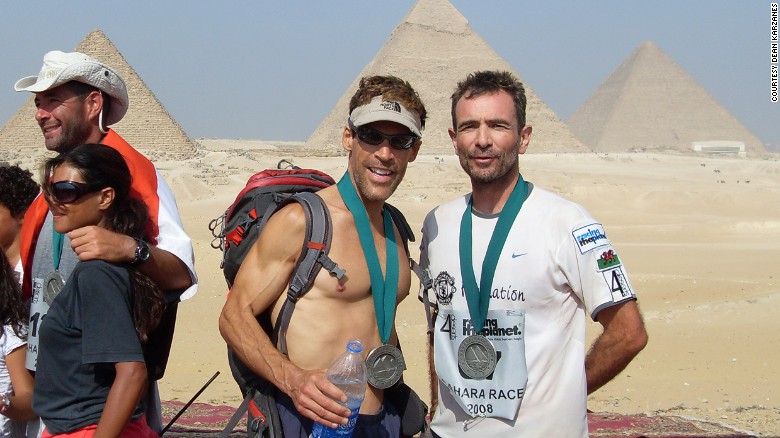 Karzanes (left) during the Sahara leg of the 4 Deserts Race, in 2008.
Who is your favorite runner from history?
A chap named Pheidippides. He was the original Greek runner from which the marathon was born. I'm 100% Greek and my Dad always insists we're from the same village as Pheidippides. I remind him that we grew up in Southern California. What village in the hills of Greece is he possibly talking about?
What do you think about on those long runs?
Everything and nothing. That's the joy of long distance running. Your mind is free to wonder wherever it may desire. You are liberated from many of the modern day trappings and encumbrances. We runners don't need much; a pair of shoe and an open road. There's power in that simplicity and as the world grows increasingly complex more people are discovering the simple joy of escaping onto an empty trail and going for a run.
You once said: "You know you're a runner when you have at least one black toenail, and if that toenail is missing entirely, all the better" — do you think there is a certain snobbery in professional running circles?
I don't think snobbery's the right word; I think it's more of a brotherhood and sisterhood. We runners are kindred spirits because we've all shared the same struggles and the same discomforts and pains, regardless of age or ability. Running is very democratizing in this way, perhaps more so than any other sport. I wouldn't call that snobber — it might be just the opposite, actually.
What is your favorite quote about running?
The Portuguese have this proverb: "Quem corre porgosto, não cansa" (Who runs for pleasure, never tires). I've always like that one.
Tags
Badwater Ultramarathon Dean Karnazes Desert marathons Gobi March Runner Sahara Desert 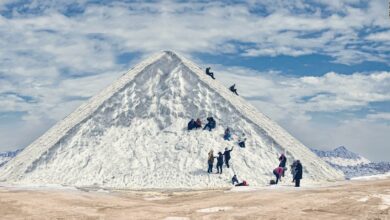 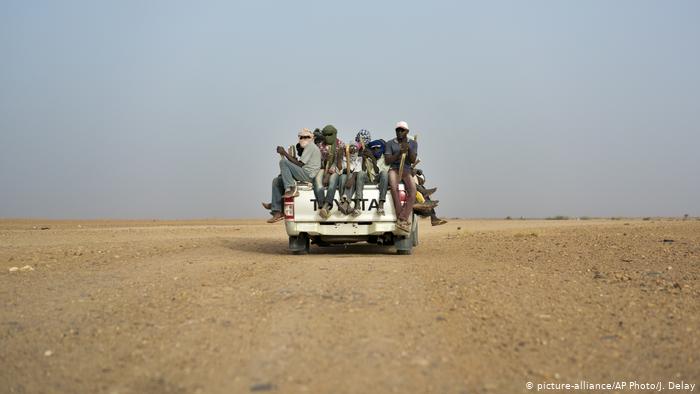 Niger’s migrant smugglers use ever deadlier routes through the Sahara 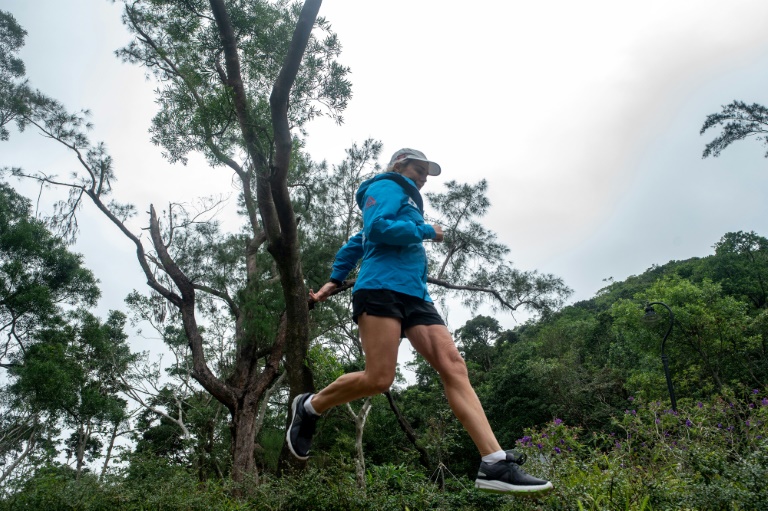 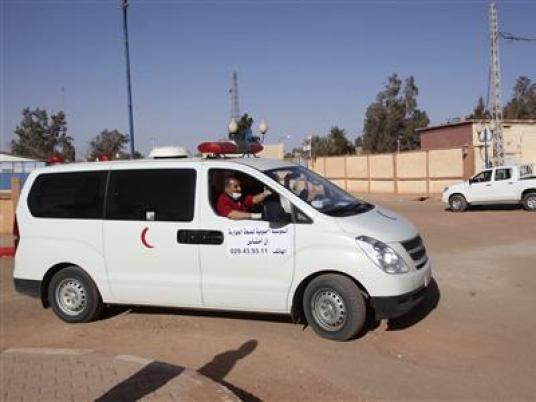