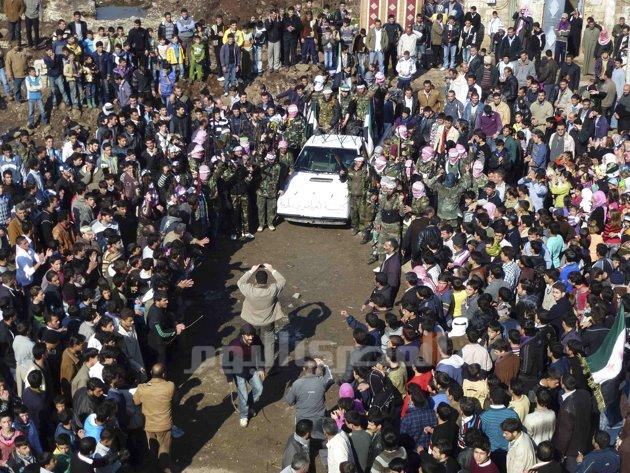 The top US military officer warned Sunday that intervention in Syria would be "very difficult" and said it would be "premature" to arm the besieged country's opposition movement.

General Martin Dempsey, chairman of the US Joint Chiefs of Staff, told CNN that Syria was the focus of competing Middle Eastern states, notably Iran and Saudi Arabia, and posed different problems for the United States than Libya did.

"There's indications that Al-Qaeda is involved and that they're interested in supporting the opposition. I mean there's a number of players, all of whom are trying to reinforce their particular side of this issue.”

"And until we're a lot clearer about, you know, who they are and what they are, I think it would be premature to talk about arming them."

Dempsey identified "a Sunni-Shia competition for, you know, regional control," of Syria being played out between Saudi Arabia and Iran as a key barrier to US intervention, as well as Damascus's "very capable," military.

"They have a very sophisticated, integrated air defense system. They have chemical and biological weapons. They haven't demonstrated any interest or any intent to use those, but it is a very different military problem," Dempsey said, noting he had not yet been asked to provide US military options on Syria.

"Intervening in Syria would be very difficult… And I think that the current path of trying to gain some kind of international consensus is the proper path, rather than to take a decision to do anything unilaterally."

"But, you know, I wear the uniform I wear to provide options when asked. And we'll be prepared to do that. But this would not be — it was a big mistake to think of this as another Libya," he added.

Syrian President Bashar al-Assad, who for 11 months has defied pro-democracy protesters with a forceful military crackdown that has killed thousands of civilians, belongs to the ruling Alawite sect, an offshoot of Shia Islam.

Alawites, who represent only 12 percent of Syria's mostly Sunni Muslim population, are closely tied to Iran.