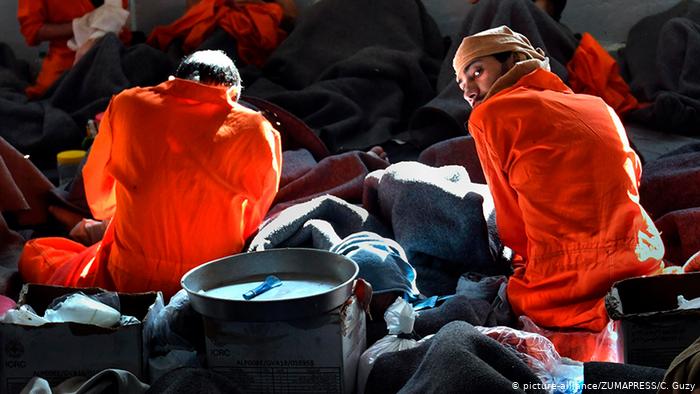 IS was defeated one year ago. But to this day, Kurdish forces are guarding thousands of former IS combatants. A recent prison riot demonstrates just how tense the situation has become in Syria’s Kurdish regions.

Islamic State (IS) combatants locked up at Hassakeh jail in norther Syria are cut off from the outside world. They have neither mobile phones, nor radios or televisions, let alone internet access. And they may only receive visitors in rare exceptions. But news of the coronavrius pandemic reached the inmates nonetheless.

For a long time now, the Kurds have called for international support in guarding former IS combatants, or for them to be repatriated. Yet so far, only Russia, Malaysia, Uzbekistan and Kosovo have taken back their citizens.

According to a recent US report by the Pentagon’s lead inspector general on “Operation Inherent Resolve” the “SDF continues to bear the burden of maintaining and securing detention facilities and IDP [internally displaced person] camps that pose significant humanitarian and security challenges in northeastern Syria.”

Dozens of countries from different continents once formed a coalition that fought and ultimately defeated IS. Yet once they accomplished this objective a year ago, they left the Kurds to guard IS fighters, put up refugees and deal with the fallout of the war. This places a large burden on the Kurds, who contributed the lion’s share of soldiers on the ground in the fight against IS, and subsequently lost 11,000 fighters.

The Rojava Information Center (RIC) suspects the Hassakeh prison riot was sparked by inmates’ fear of contracting the coronavirus. Video footage from within the prison, after all, show inmates holding up signs to CCTV cameras demanding that anti-IS coalition representatives and human rights activists visit the facility.

Currently, some 5,000 IS combatants are locked up in the prison. Among them are many foreign fighters, including high-ranking IS leaders, and several Germans, too. Hamburg lawyer Mahmut Erdem represents two of them. Talking to DW by phone, he said that until this day, neither had shown remorse for their actions or distanced themselves from IS. Even so, he believes both should be brought back to Germany and tried there.

Erdem said Hassakeh prison is a former school and thus unsuited to house inmates, which media reports support. In January this year, a reporter with Swiss daily Neue Zürcher Zeitung who had visited the prison said he saw 130 prisoners crammed into a 100-square meter room.

It’s likely that conditions will deteriorate further in the region. Ever since Turkey invaded parts of Kurdish-controlled northern Syria last autumn, the region’s key water works near the city of Serekaniye are under its control. The province of Hassakeh, with its 500,000 inhabitants, Hassakeh prison and numerous refugee camps rely on the waterworks. And Turkish-backed militias have repeatedly cut off their water supply.

Al-Hol refugee camp is the region’s largest, with some 67,000 people living there cheek by jowl. International Rescue Committee spokeswoman Misty Buswell told DW that a coronavirus outbreak in any of these camps would have dire consequences: “The sanitary conditions are already bad, and when the water supply is cut off, it will become almost impossible for camp residents to practice basic hygiene like washing their hands.”

Read more: Germany takes back IS mother and her three children from Syria

Germany’s Interior Ministry says about 100 German adults and 150 children are currently in northern Syria. Paving the way for their repatriation, however, has proven very difficult. Even though the Berlin-Brandenburg Higher Regional Court last November ruled that a female IS sympathizer and her children currently based in a norther Syrian prion camp should be repatriated “immediately.”

Which implication does this court ruling have for other German IS supporters still based in Syria? Germany’s Foreign Ministry states that “each case must be assessed individually,” adding that “we rely on a range of different actors to carry out repatriations.” However, the ministry says that the present situation has complicated any such cooperation. It is made yet more difficult, it says, as Germany does not maintain a consulate in Syria.

Erdem confirms that ever since Turkey invaded northern Syria, no progress has been made with regard to repatriating Germans. Germany has even pulled most of its personnel from neighboring Iraq due to tensions between the US and Iran and the coronavirus outbreak. So for now, German citizens will remain stranded in the region.

IS seeks to capitalize on coronavirus panic

The recent report by the US Department of Defense Office underscores how serious the situation really is. It states that IS remains “active in SDF-controlled internally displaced persons camps” in Syria and that “SDF guards have struggled to maintain security at the al-Hol camp, where IS members have attacked the guards.” Camp residents are being intimidated and IS sympathizers are enforcing their ideology.

IS propaganda newsletter al-Naba, meanwhile, has celebrated that its enemies are growing fearful of the novel coronavirus. It urges attacks on its adversaries amid the crisis and calls for Muslim inmates to be freed from prisons and camps.

Activists say IS prison riots break out again in Syria

Kurdish forces end riots by IS prisoners in Syria: Spokesperson