“At 10:16 this evening (2016 GMT), the Israeli enemy carried out an aerial attack from the direction of the occupied Syrian Golan on some targets in the Damascus area,” a Syrian military source was quoted as saying by state news agency SANA.

“Our air defense confronted the missiles and downed most of them,” the source said.

There were no immediate reports of casualties.

Israel has regularly launched attacks targeting Iran-linked military facilities and Lebanon’s militant Hezbollah forces in Syria since the outbreak of the civil war in 2011.

The UK-based Syrian Observatory for Human Rights reported that the strikes hit an area south of Damascus where Iranian Revolutionary Guards and Hezbollah were present.

An Israeli military spokesperson declined to comment when asked about the reports.

Israeli state broadcaster Kan reported that the country’s top security officials met on Sunday evening to discuss an alleged Iranian attack on an Israeli-owned vessel in the Gulf of Oman earlier this week.

Defense Minister Benny Gantz said on Saturday he believed Iran was behind Thursday’s explosion on the MV Helios Ray, a vehicle carrier traveling from the Saudi port of Dammam to Singapore.

While he did not provide details, his remarks were a rare acknowledgment of Israeli operations in the war-torn country.

Israel views Iranian presence in Syria as a red-line and has consistently vowed to prevent the Iranian forces from gaining a foothold in the country.

The Pentagon said the attack was in retaliation to the rocket attack in Iraq earlier this month, which left one civilian contractor dead and injured a US service member among others. 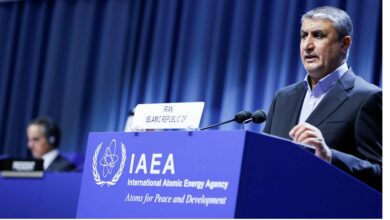