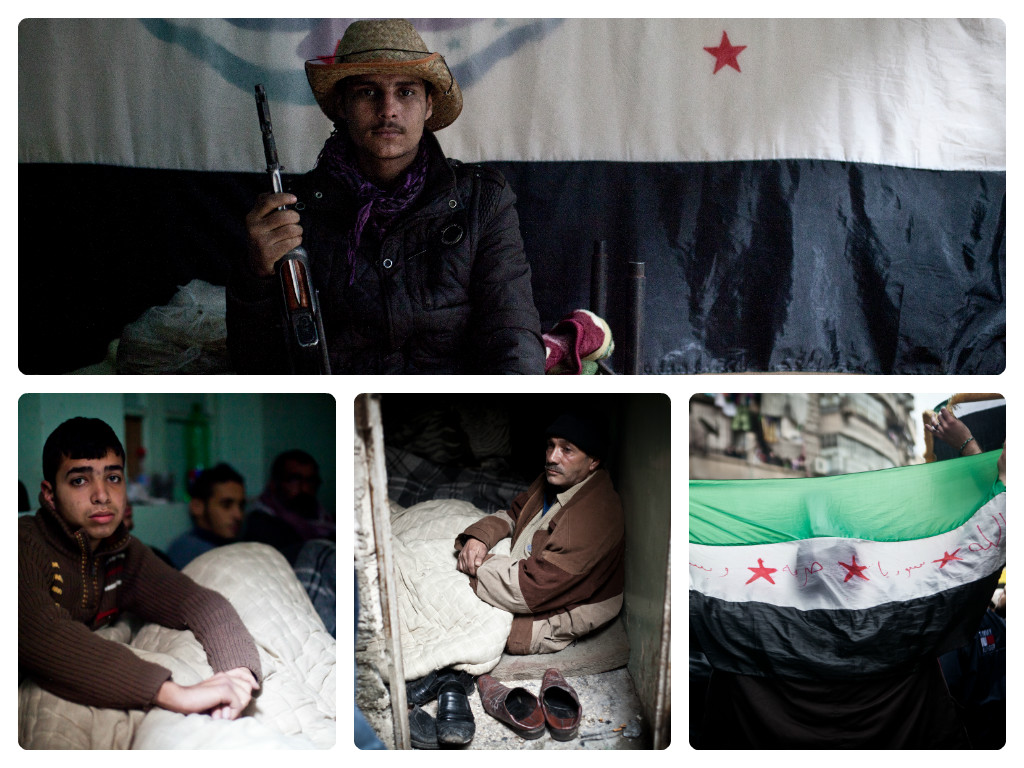 ALEPPO — The atmosphere was tense in Bustan al-Qasr after a Friday protest turned into a fight between two groups, one calling for an Islamic state after President Bashar al-Assad’s fall and another demanding a free and liberal future for Syria.

The shabiha, defined by residents as pro-government militias or spies in civilian clothing, were spotted at the demonstration, which only served to heighten tensions among protesters.

In one of the small streets around Bustan, some of those who had taken part in the protest gathered in front of a primary school that had been closed for a while. Its classes were being used as an office and a prison run by the local civilian police.

At the back of the courtyard was a room with a Free Syria flag hanging above the desk. Inside sat a young man with a Kalashnikov, waiting.

Khaled is 20 years old. He defected from Assad’s official army in central Aleppo to join the Free Syrian Army (FSA) and become part of a group called the Security Revolution.

The Security Revolution in central Aleppo is led by local civilians policing the area. Facing an increase in crime levels, Ryhan, acting as chief of the police station, decided with 20 other Bustan residents to tackle the increasing security vacuum by forming a unit of civilian police.

“There were too many robberies and people being kidnapped in the streets. We had to do something so people could feel more secure. We are not the FSA; we are just civilians who want to protect our goods and our people,” says Ryhan.

He says they asked some FSA members to join them because they have weapons.

“After six months, our team is now made up of 35 people,” he says. “It was created by the civilian council that organizes activities in the area, and some of the members are soldiers who defected from Bashar’s army.”

Rebels have been fighting against Assad’s regime for more than 20 months now, and the conflict has undoubtedly changed the face of daily life for citizens all over the country.

This past week, US Secretary of State John Kerry said the death toll may have reached 90,000, citing figures given to him by his Saudi counterpart, Prince Saud al-Faisal, according to AFP. That figure is higher than United Nations estimates, which put the toll at about 70,000.

The UN estimates more than 750,000 people have fled the country, while a further 2.5 million are internally displaced.

Amid the chaos, the shortage of basic supplies, the displaced families and the constant threat of being caught in the crossfire, the daily lives of citizens are further stressed by the lack of a proper security apparatus. As both sides fight each other, security in residential areas is sparse, and the void is infested with increasing levels of crime.

To fill this gaping security vacuum, concerned citizens in these areas have taken up the daunting task themselves, organizing to form a civilian police force that is now quite formal in structure, despite being haphazard at first.

The Bustan security forces are not the only civilian police in Aleppo. There are five main offices, all of which share information and collaborate in their policing efforts.

At first, the main crime they fought was a number of robberies of local shops, but this is minor compared to the issues Ryhan has been facing in the past few months.

“We now have serious complaints about members of the Free Syrian Army. Some of them are stealing cars to move around. Other groups are ejecting families from their homes in order to be closer to the front,” says Ryhan. “I’m paying close attention to this because people are losing trust in them.”

Their efforts are welcomed by local residents who have grown tired of some FSA members having free reign to do whatever they want.

“If we catch an FSA member stealing, he gets the same treatment as anyone else, except that first I organize a meeting with the leader of his battalion to inform him of the situation and also to make sure the stolen goods are returned to the owner,” he explains.

He was once asked to join an FSA battalion for US$150 a month, but refused.

“I don’t have anything against the FSA, but we are living with seven different battalions in this area, and some of the fighters are doing bad things to civilians, who get so fed up sometimes that they report [FSA members] to the shabiha,”he says.

When someone is arrested, Ryhan and his team write out a report as you would in a formal police station. They are now looking at working with lawyers to investigate cases and determine proper sentencing.

Several checkpoints are set up around Bustan as civilian police officers walk the streets to deal with any problems that arise. At night, two cars roam around and question anyone who seems suspicious.

“We are also responsible for helping residents in case of sudden shelling, and we help transport the injured and bodies from the ruins,” he says.

One of the revolution’s main goals is to catch shabiha, who are seen as thugs and are accused of killing and beating people who attend protests. They also reportedly carry out campaigns of intimidation that involve executions, drive-by shootings and sectarian attacks.

Shabiha are known as pro-regime militiamen hailing from Assad’s minority Alawi sect, which dominates the government and security apparatuses, as well as the military.

But for Ryhan, the accusations need to be backed by proof.

“When someone is being accused [of being a shabiha member], we try to have videos or pictures of the reported incident or have eyewitnesses,” says Ryhan.

Since they can’t level charges against every single person possessing a gun, Security Revolution members check to make sure the person has a license to carry a weapon.

“Anyone who has a new gun has to declare it to the Security Revolution to get a document stating so, and avoid any trouble in the future. People who owned a gun before the revolution would normally already have a license for it. Anyone in possession of a gun that doesn’t have one of the two [documents] is considered a shabiha,” Ryhan says.

On the other side of Ryhan’s office, a small room is kept closed. Inside are 10 men aged between 16 and 40. All of them have been charged with different crimes and are waiting for lawyers and the Security Revolution to look into their cases.

Among them is 16-year-old Mohamed Abdel Wahba, who has been accused of spying on the FSA in central Aleppo.

“I would walk around in the public garden in central Aleppo and observe what FSA members were doing. After, I would go to Jab al-Jabria area, where the regime is in control and report what I’ve seen and heard,” he says.

At first, he claims to have done this for a small fee he received from the regime. A few minutes later, however, he tells Egypt Independent that in fact, one of his friends was captured by the regime, and the soldier threatened to kill him if Abdel Wahba did not spy on the FSA.

“I’ve been in custody for 10 days. My family comes to visit me sometimes, but now I don’t know what’s going to happen,” he says.

Ryhan says his young age will be taken into consideration during investigations.