UNITED NATIONS (AP) — A 20-year-old Syrian woman with cerebral palsy told the United Nations on Wednesday that hundreds of thousands of people with disabilities already “were forgotten in times of peace” and are struggling to survive in her country’s long war as they “remain invisible.”

Nujeen Mustafa urged the Security Council at a meeting on the humanitarian situation in Syria to ensure that the urgent needs of people affected by the conflict are met, especially the disabled. She said many struggle “to even get to sites where they can get aid.”

Seated in a wheelchair, she described how her siblings carried her out of the city of Aleppo which was under attack after relatives were killed in the bombing of a funeral in June 2015. After a harrowing 16-month journey, she arrived in Germany where she is now a student.

“The conflict has had a significant psychological impact, too,” Mustafa said. “Even in my case, I still jump and get startled when I hear a loud noise, a reminder of those hours hiding in the bathroom” in Aleppo.

Ursula Mueller, the assistant secretary-general for humanitarian affairs, told the Security Council that Syrians “have lived through a litany of horrors” and the disabled are “among those people who suffered the most — and are still suffering today.”

They are “often excluded and highly vulnerable,” she said, and many lack access to health care and education and face a “heightened risk of violence and abuse.”

Mueller called Mustafa “an advocate for all those with disabilities in conflict settings, for women and for young people.” And she said the U.N. must do “our utmost to support and protect persons with disabilities, and to ensure that their specific and diverse needs are met.”

Mustafa said people with disabilities “seem to be an after-thought,” and their needs are largely overlooked in humanitarian efforts in Syria and neighboring countries where millions have fled.

Like many others, she said, accessing basic services such as sanitation, health care and education was difficult when she fled Syria. “On my journey to Germany, I didn’t find many accessible bathrooms along the way — and that’s especially hard for a woman,” she said.

“You need to address the needs of people with disabilities, particularly women,” Mustafa said. “This is not a favor. This is not charity. This is our rights.”

She said there is very little data on how many disabled people are in Syria and neighboring countries, which leaves them “invisible” when it comes to programs, policies and assistance.

“People with disabilities were forgotten in times of peace. What do you expect in times of war? But that doesn’t make it right,” Mustafa said. “You need to count us because we count, too.”

The U.N. children’s agency, UNICEF, estimates 1.5 million Syrians still in the country were disabled during the war, which is now in its ninth year, she said. Just in Idlib, the last major rebel stronghold, “there are more than 175,000 people with disabilities,” many of them as a result of the conflict, she said.

Mustafa said people with disabilities are a resource, not a burden, and should participate and be represented in all parts of the Security Council’s work because they know best the risks and challenges they face and their needs.

“Nothing about us, without us,” she said. “Otherwise, we continue to remain invisible.”

FILE – In this Aug. 15, 2018 file photo, people ride their motorcycle by damaged buildings in the old town of Homs, Syria. Syrian government forces came under separate attacks from Islamic State militants and al-Qaida-linked insurgents in different parts of the country that killed nearly 50 soldiers and allied fighters, activists and a war monitoring group said Saturday, April 20, 2019. In one attack, IS militants ambushed Syrian government forces in the desert of central Homs province Thursday night, setting off two days of clashes that killed 27 soldiers, including four officers, the Syrian Observatory for Human Rights said.(AP Photo/Sergei Grits)

Doctors say lives are lost in hospitals in Ethiopia’s Tigray due to dwindling supplies, blame

Lebanon’s pound hits low of 30,000 to a dollar amid crisis 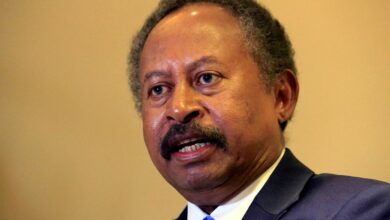