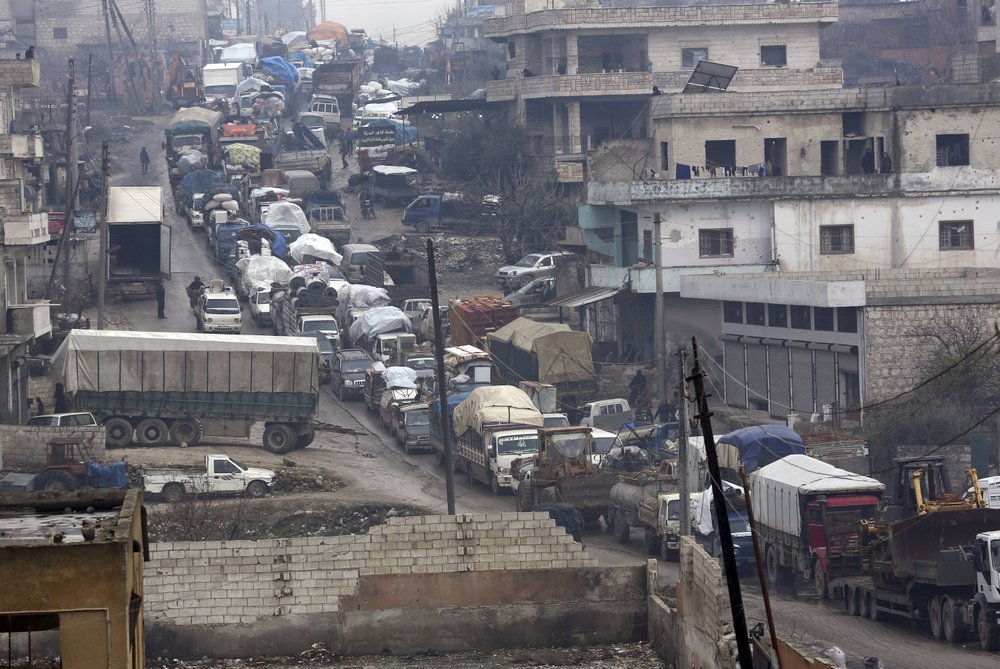 BEIRUT (AP) — Throughout Syria’s civil war, Maad al-Khalaf helped other Syrians find shelter in the opposition enclave in the northwest as they fled government military advances around the country. Now he’s the one in need of refuge as a swift offensive overwhelmed his home village.

He joined hundreds of thousands in Idlib province scrambling to escape the widening, multi-front assault by President Bashar Assad’s forces, squeezing into whatever structures they can find in a shrinking territory.

“There is no house of concrete or of mud or even a chicken coop that is not inhabited,” the 41-year-old al-Khalaf said. “People are in dire need of any shelter. Even a tent sometimes is not available.”

The son of a prominent landowning family in Qmenas, an ancient Aramaic village, al-Khalaf fled with his family of five to a nearby town as the bombs began to fall. Within three days, that was swept up in the offensive as well, so they ran farther — to a village near the Turkish border, 30 kilometers (18 miles) from the front line.

There, they now live in a tent on a piece of farmland donated by a relative. More relatives moved in as well. Winter wind sweeps through the new settlement, where 30 families huddle in 15 tents set up in the mud, sharing one toilet, one sink and a huge sense of relief that they are out of harm’s way, at least for now.

Nearly a quarter of the 3 million people in Idlib and surrounding areas have surged north as Russian-backed government forces advanced in recent weeks, determined to capture the last remaining opposition-held territory. Terrified families piled on trucks and vehicles, sitting on top of mattresses and blankets, clogging sludgy rural roads in harrowing scenes of exodus that have been recurrent in Syria’s conflict, now in its ninth year.

Around half the territory’s population had already been displaced from other parts of Syria, so formal camps are full. People are setting up tents in farms or sheltering in half-constructed buildings with no windows or doors in temperatures below freezing.

Almost half of the 700,000 uprooted since Dec. 1 are children, the U.N. estimated. Schools have stopped, 26 immunization centers closed, threatening new outbreaks of diseases, and some 53 health facilities no longer operate, including three directly hit in airstrikes or shelling. More than 370 civilians were killed since December, according to the U.N.

While it may not be the biggest single wave of displacement — nearly a million were on the move after a government offensive a year ago — this may be the most dire.

“This is truly the worst humanitarian crisis because of lack of resources, the surge in displacement over short periods, weaker emergency responses and because shrinking areas outside of government control means a major problem in providing shelter,” said Mohammed al-Shami, a coordinator for the area’s Response Coordination Group, which works with U.N. agencies to assess needs.

For the millions who refuse to live under government rule, this is their last frontier with few places to run to.

Turkey, the opposition’s last friend, is already home to 3.6 million refugees and won’t open the concrete blast walls it erected along most of the border for a new wave.

In one swift move over just a few days, government troops captured more than 600 square kilometers (230 square miles). The forces’ immediate goal seems to be to control the strategic highway running across Idlib and linking northern Syria to Damascus.

An opposition fighter said the government and Russia have adopted a typical “scorched earth campaign” that drove them from areas along the highway. He called opposition losses “catastrophic,” speaking on condition of anonymity to discuss the military situation.

The rapid advances sparked rare clashes with Turkey, which has troops in the region to monitor a 2018 cease-fire deal. Turkey has sent in thousands of reinforcements, but the buildup didn’t stop government advances, only deepening the panic among residents and their skepticism over Ankara’s motives.

The opposition fighter said it remains “ambiguous” why Turkey has been unable to stop the government troops.

Turkey says it has coordinated its deployment with Russia. Aron Lund, a Syria expert, wrote that Turkey may be seeking new leverage with Russia, which has “positioned itself as Idlib’s kingmaker.” Ultimately, he said, neither Moscow nor Ankara will want to let Idlib ruin their strategic relationship.

Russia, meanwhile, has thrown its weight behind Damascus’ push. Nothing, including hospitals, has been spared.

Opposition activists said Russian warplanes were behind an airstrike on the main hospital in Ariha village in late January that killed at least 10 people. Moscow dismisses the allegations.

Dr. Tayseer, a surgeon there who was previously displaced from southern Syria, said that after one missile hit, he emerged from hiding in the basement to help; then a second and third missile struck. The hospital was destroyed, Tayseer was slightly injured, and his top anesthesiologist was mortally wounded.

Strikes on health facilities are always a precursor to clearing out the civilian population, said Tayseer, who asked that his full name not be used to protect his family. He moved to Idlib city and volunteered in hospitals there.

Repeated displacement, he said, is the fate of those who refuse government rule. “We are citizens without a nation. We are either displaced, killed, imprisoned or detained.”

Over 100 villages and towns recently captured by the government are now ghost towns.

The U.N. estimates some 144,000 of the recently displaced moved to Turkish-administered Syrian areas to the north. Nearly 250 families traveled even further, to Raqqa in the Kurdish-controlled east.

A 36-year-old woman from Saraqeb fled with her family in the middle of the night soon before the town was captured. They went to Idlib city and found residents in a panic, fearing imminent attack and searching for places elsewhere to live.

Her family has found an apartment in the Turkish-administered town of Jarablus on the border. Expecting government forces to keep surging, she said her next move will be out of Syria.

“I can’t take it. I will leave by any means,” she said, asking to remain anonymous because she is from a well-known family.

Al-Khalaf works in Idlib city but keeps his family in the village. As he spoke by phone from his office to the AP, thuds of bombs and airstrikes could be heard.

Over the past years, al-Khalaf, once a senior government official before joining the opposition, used his local relations to build a network to find unused houses, warehouses and concrete shelters for the displaced flowing into the opposition enclave. He has used his contacts to find homes as part of his work with Violet, an organization offering emergency and aid services.

Now many of those he helped lodge are fleeing again. Al-Khalaf is constantly fielding calls from those seeking help.

Since mid-December, more than 6,000 requests have come into Violet’s hotline, which coordinates accommodation and offers free transportation for the displaced and their furniture.

Finally, al-Khalaf had to use the hotline himself.

As he fled Qmenas, he had to decide what to leave behind: 19 jerry cans of newly pressed olive oil worth nearly $600, electrical appliances, the furniture of his bedroom — “and the memories that come with it” — and his living room, where he had received many a guest from his network of friends.

His family packed lentils, rice, pickles and burghul and the children’s books and school bags. His four children were top of their class but had to be pulled out of school to flee before grades came in.

Al-Khalaf fought back tears remembering his children’s many questions: Why is it like this? Why did they leave home? And why is the Syrian army advancing?

“My (seven-year old) daughter asked why the rebels are not fighting back. Why is your phone ringing all the time, Baba?”