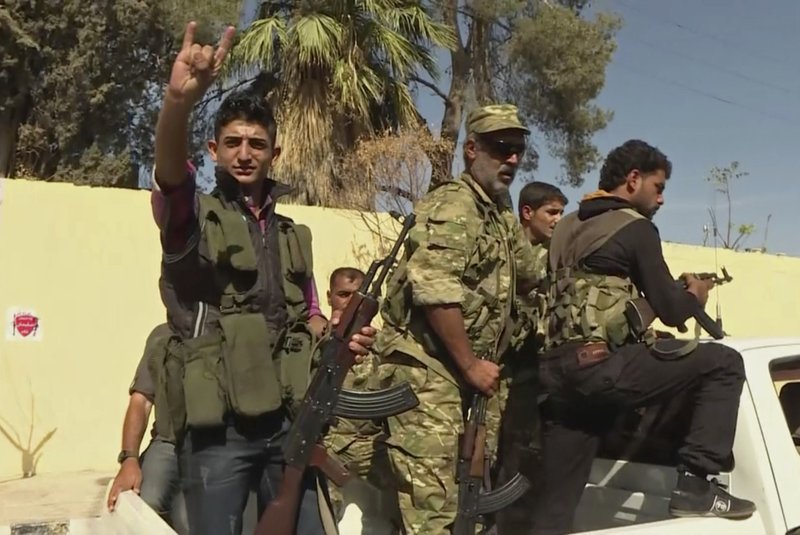 Syria’s notoriously fragmented opposition gathering Wednesday in the Saudi capital is trying to close ranks and come up with a unified vision as international efforts appeared headed toward a resolution that would preserve the rule of President Bashar Assad.

The opposition remains rife with disagreements and is weakened by its allies’ distraction with other conflicts. President Bashar Assad, in contrast, is the most secure in his post since the war began, boosted by significant military victories backed by his allies Russia and Iran that have turned the tide of the conflict.

Days ahead of a new round of peace talks in Geneva, and a new separate effort by Russia to bring the opposition and the government together, the opposition is meeting in Riyadh to choose new representatives.

Hours before the meeting, a dozen opposition figures, including the head of the Riyadh-formed High Negotiations Committee Riad Hijab, resigned, apparently in protest of others being too willing to accept the continued rule of a man they view as a discredited tyrant.

Syria’s opposition has long struggled to prove its relevance under a leadership mix made up of academics and exiled politicians, or Islamist clerics and ultraconservative jihadists. Despite a wide array of international allies— western countries, wealthy Gulf countries, and neighboring Turkey — the opposition has always been outgunned and weakened by its multitude of allies, who often bickered over influence.

Here is a look at the Syrian opposition, who they represent and who backs them.

When the Syria protests first broke out against Assad in 2011, it was a spontaneous revolt against his family rule, largely inspired by the “Arab Spring” protests sweeping through the Arab world. It soon turned into a violent confrontation as the government opened fire on protesters and detained thousands.

The FSA became the focus of foreign aid but complained it never received weapons or ammunition to give it enough edge over the Syrian government. The FSA leadership, lacking a centralized structure and prone to internal feuding, was eclipsed by Islamist groups that attracted the support of Gulf donors and Turkey.

This opened the door to foreign powers to pick and choose their groups and push their own visions for Syria.

Part of their disagreements can be traced back to their backers. Rivals Saudi Arabia and Qatar have bickered over influence over the opposition, which translated into splits among the rebel factions that each supports. Other opposition groups were based in Turkey.

There was the Istanbul-based Syrian National Council, formed in 2011. A year later, the National Coalition superseded it, bringing in representatives from civil groups and gaining the support of the FSA. The Coalition was recognized by France, the UK, EU and US, six-member states the Gulf Co-operation Council and 100 countries as “the legitimate representative” of the Syrian people. It called for the overthrow of Assad and his security forces and agreed to go to the Geneva talks, attended by the government. The SNC boycotted.

Syria’s Kurds have differed over which groups to join. The now-dominant Kurdish party, backed by the US and in control of nearly 25 percent of Syria’s territories, is calling for a federal system and has for the first time been invited to the talks hosted by Russia.

There’s the Damascus-based opposition, which is wary of the Islamists’ influence among in the exiled groups and the powerful role played by the Gulf states. It is tolerated by the government, yet called for regime change.

Russia, Assad’s main backer, and Egypt, which had kept contacts with the Syrian government, decided to join the clamoring for representing the Syrian opposition. In 2014, an opposition group was formed in Cairo and included a former government official, Jihad Maqdisi. The group supports a political transition under the UN-led Geneva talks.

And in Moscow, another group, which also included former deputy prime minister and member of the Syrian communist party, Jamil Qadri, supported reforms but under Assad leadership.

In 2015, Riyadh decided to form a new umbrella group: The High Negotiation Committee, led by Hijab, who was a former prime minister and who resides in Qatar. The group lead opposition representation in subsequent Geneva talks, and represented the political opposition in the Russian-sponsored security talks in Astana.

Aides told local papers that Hijab, in his resignation Monday, was protesting Saudi Arabia giving up on calls for Assad to step down. Media reports suggested Saudi Arabia didn’t invite HNC to the 2017 Riyadh meeting.

With a new round of international talks schedule for 28 November in Geneva, it seems a new opposition committee is about to emerge— bringing the Riyadh, Moscow and Cairo groups together.

Wednesday’s Riyadh summit comes as Russian-led efforts have largely frozen the lines of conflict in Syria, through intensive negotiations with Turkey, Iran, Jordan, and the United States over the course of the year.

Now, it will be up to Saudi Arabia to deliver an inclusive opposition block for upcoming talks with the government in Geneva and Sochi, to translate Syria’s negotiate stalemate into diplomatic progress, said a Syrian mediating between the sides and outside powers in the Saudi capital. The mediator could not be identified because he was not authorized to brief reporters.

Previous talks have been frustrated by the HNC’s refusal to accept opposition groups out of Cairo and Moscow, seen as unfavorably close to Assad. This allowed Assad and Russia to stall on the diplomatic track on the grounds that it was not negotiating with a representative opposition coalition while they made strides to crush the armed rebels in Syria.

Russia and Iran, who have backed Assad in regaining control of nearly half of the country, have partnered with Turkey, one of the major Syrian opposition backers that is now more concerned about growing Kurdish influence in northern Syria.

The United States has focused its policy in Syria on defeating the Islamic State militants, allying with the Kurdish-led Syrian Democratic Forces. While President Obama has wavered on his support of the Syrian rebels, President Donald Trump ended altogether the program that financed moderate rebels after CIA vetting.

The Riyadh conference is reportedly organized after close consultations between Russia and Riyadh. Russia’s Foreign Minister Sergey Lavrov hailed the resignation of Hijab as “departure of the radically minded opposition figures,” and expressed hope it will be a unifier of the opposition. “We support Saudi Arabia’s efforts in that direction,” he said.

Meanwhile, dissidents view Moscow as attempting to create a parallel track to Geneva, which mandates a political transition for Syria.

A sudden and ferocious battle outside the Syrian capital last week instigated by rebels with limited external support has overwhelmed the army and exposed Assad’s forces as fundamentally ineffectual without outside support.

Putin claims Syrian war 'wrapping up' in talks with Assad