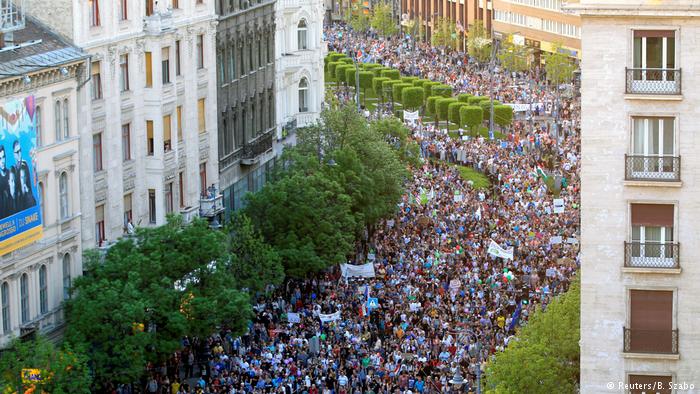 Protesters took to the streets of the Hungarian capital on Saturday in the second mass anti-government demonstration since Prime Minister Viktor Orban won a landslide election victory on April 8.

Many of the demonstrators chanted “democracy” and waved Hungarian and European Union flags as they marched through the city to a rally.

The protesters accuse Orban and his right-wing nationalist Fidesz party, which won two-thirds of parliamentary seats at the polls, of taking control of state media and using them to gain an election advantage.

Their criticisms have been echoed by observers from the Organization of Security and Cooperation in Europe (OSCE), who said the election campaign was marked by media bias.

Tens of thousands already held an anti-Orban rally in Budapest last Saturday, and more demonstrations are planned in provincial cities in the coming weeks, organizers say.

Orban won his election victory on a vehement anti-immigration platform that has set him at odds with the European Union.

Since his win, Orban has also stepped up his campaign against non-governmental organizations linked to US billionaire George Soros, whom Orban accuses of wanting to destroy Europe through mass immigration.

The parliament is soon to vote on a controversial “Stop Soros” package of bills that would impose a 25 percent tax on foreign donations to NGOs that “support” illegal immigration.

The legislation would also see NGO staff possibly prevented from entering border areas and “security tests” introduced for the organizations.

Soros’ foundation said on Friday it could leave Hungary if the laws were passed.