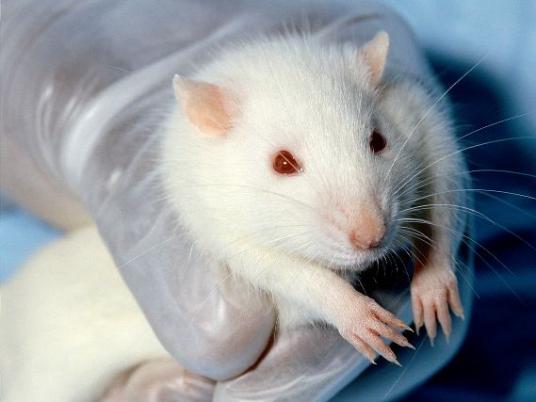 When scientist Hussein Kaoud decided to test genetically modified food on rats, he produced results that were extremely alarming and corroborate the conclusions that some international, independent scientists have reached.

Kaoud, of Cairo University’s Faculty of Veterinary Hygiene, fed nine groups of rats and mice different genetically modified foods — food made from organisms that have been biologically modified to incorporate genes with desired traits — and analyzed their physiological and psychological reactions.

The most common genetically engineered crops can resist herbicides or even create their own insecticides. Others have been manipulated in laboratories to enhance their tolerance to drought and water scarcity.

While some genes are extracted from another plant and inserted in the genome of the new super plant, the most commonly added gene is Bacillus thuringiensis, or Bt — a soil bacterium that naturally produces crystal proteins fatal to insects. When a Bt gene is inserted into corn or cotton, each plant in the field becomes an insecticide that causes insects’ stomachs to rupture when they feed on it.

Egypt agreed to import Monsanto’s genetically modified corn, MON 810, in 2008. The crop can resist a pest called the corn borer. Two shipments of 70 and 40 tons respectively have already arrived in the country.

There are also patent issues. As soon as Monsanto or another biotechnology company breaks the genome of the plant to insert a new gene, the seed becomes the property of the company and is subjected to intellectual property rights — a big threat to farmers’ independence worldwide and to their right to save seeds and replant them the next season.

These modified crops also threaten biodiversity. Companies flood the market with uniform seeds, which would endanger food security if a disease attacks these plants. In that situation, most of the world’s production of corn, soy, canola or cotton could be eradicated.

All these issues are major but might not be enough to deter the consumer to buy and eat these products, said Jeffrey Smith, the executive director and founder of the US Institute for Responsible Technology, a world leader in educating policymakers and the public about genetically modified food and crops.

In an interview available on YouTube, Smith said that people might hear about the dangers of these products and even be upset about them, but they might go out and buy them anyway.

“But if you explain to a consumer that eating a corn chip that is genetically engineered might turn your intestinal bacteria into a living pesticide factory, then they put on the brakes,” Smith said.

As a result, genetically modified food did not undergo any long-term safety assessments before being introduced on the market.

Kaoud decided to self-fund an experiment on the impact of feeding genetically modified food to rats and mice in a lab from the Veterinary Hygiene Department of Cairo University.

Symptoms started appearing after four weeks into the experiment.

“I recorded the alteration of different organs, shrinkage of kidneys, change in the liver and spleen, appearance of malignant parts in the tissues, kidney failure and hemorrhages in the intestine,” Kaoud said. “The brain functions were touched as well, and the rats’ learning and memory abilities were seriously altered,” he said.

Kaoud said he also recorded lower immune responses to the diseases in the rats that became much more sensitive to environmental pollution, especially heavy metals and dioxin. Some developed cancer.

He also observed another alarming problem. The death rate of baby rats raised by mothers on a diet of genetically modified corn increased by 35 percent, compared with the group of babies whose mothers ate natural corn, and they were considerably smaller. Half of them died after three weeks.

Mohamed Fathy, a plant pathologist at Monufiya University, is also in the process of publishing two papers related to the issue. In one of them, he fed genetically modified corn to goats and sheep, which experienced liver and kidney deficiencies – just like Kaoud’s rodents.

On an international level, some of the world’s most renowned scientists from various independent research institutes, such as the Rowett Institute in Scotland, the Russian Academy of Sciences in Moscow and the CRIIGEN in Paris, have conducted similar genetically modified food experiments on rats, mice and other animals.

Arpad Pusztai of the Rowett Research Institute in Scotland is considered one of the world’s best biochemists. Between 1995 and 1998, he was in charge of leading a team of scientists to determine the effect of a Bt genetically modified potato on rat’s health. The US wanted to export the potato to the UK.

His results were unprecedented. Pusztai discovered that the rats fed the genetically modified potato were sick with pre-cancerous cell growth in the digestive tract, smaller brain, liver and testicles, with partial atrophy of the liver and a damaged immune system. His findings showed that genetic engineering caused the damage to the rats, not the insecticide itself.

In 1998, Pusztai went public and announced the results of his experiment on TV. The next day, he was fired and his research team was dismantled. A phone call from 10 Downing Street, the house of the British prime minister, was reported to the head of the Rowett Institute a few hours before the whole research team was dismissed and their reputation ruined by the British media.

He was supposedly blamed for having disclosed partial results of his experiment before his paper was reviewed by peer scientists and published in a scientific journal.

In Egypt, Kaoud’s results on force-feeding rodents with genetically modified organisms will be published in the next couple of weeks by two major scientific journals, Neurotoxicology and Ecotoxicology. The scientist is extremely worried by the conclusions of his experiment.

“Egypt needs to freeze the process of importing until additional tests have been conducted, because as it is, the product is not safe for human consumption,” Kaoud says.

“Whether these scientific publications will impact further shipments depends on whether the such shipments will seek legal approval by the competent authority, namely the Ministry of Environment, or will be imported illegally,” says Osama El Tayeb, a microbiology and immunology professor at the Pharmacy Faculty of 6th of October University who has also acted as Egypt’s focal point for biosafety issues since 2000.

“The question is not only political but touches on public participation and the fight against corruption. The Ministry of Environment has been briefed but the public should take a stand as well,” El Tayeb concludes.