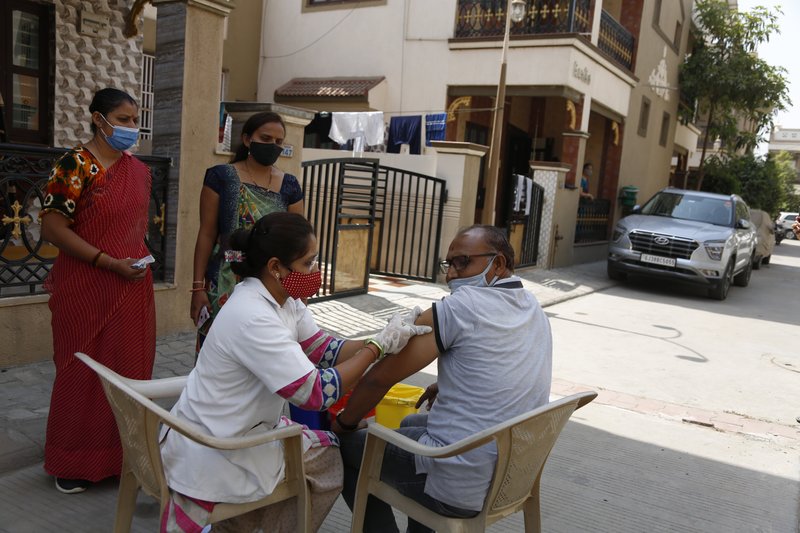 The decision came after health authorities said that they were facing overwhelming pressure in intensive care units in recent weeks because of severe infections. This is the second time the South Asian nation has enforced a virus lockdown after the first last March.

On Monday, authorities suspended operations of all domestic flights, river transport, and trains. Only emergency services will remain operational.

Banks will operate for only two and a half hours daily. Industries are allowed to operate but factory owners have to facilitate commute of their workers.

The government has asked people not to go out from 6 p.m. to 6 a.m.

Owners and workers of shopping malls in Dhaka’s Elephant Road area took to the streets Monday, demanding that authorities allow them to run their shops.

Bangladesh has reported 637,364 virus cases since the pandemic began, with 9,266 deaths.

TOKYO — Special coronavirus measures started Monday in Osaka and its neighboring prefecture in western Japan and another prefecture in the north as Japan tries to minimize the impact to specific areas where infections are rising ahead of the Tokyo Olympics.

Osaka, Hyogo and Miyagi in the north have had sharp increases in daily cases since early March.

Experts have raised concerns about Osaka’s rapid spike — with many cases linked to new variants of the virus first detected in Britain — and the burden on health care.

Osaka Gov. Hirofumi Yoshimura said he was alarmed by the fast-spreading new variants and urged the residents to use caution and cooperate. Serious cases are on the rise and flooding hospitals and that medical systems in Osaka are under heavy pressure, Yoshimura said. He has proposed canceling a torch relay scheduled to pass Osaka City on April 14 and is now discussing a route change.

Under the measures, effective for one month until May 5, restaurants and bars in Osaka, Nishinomiya, Amagasaki, Ashiya, Kobe and Sendai are asked to close by 8 p.m. Residents are requested to stick to basic safety measures including mask-wearing, social distancing and avoiding non-essential outings.

NEW DELHI — India has reported its biggest single-day spike in confirmed coronavirus cases since the pandemic began, and officials in the hard-hit state home to Mumbai are returning to the closure of some businesses and places of worship in a bid to slow the spread.

The Health Ministry on Monday reported 103,558 new COVID-19 infections in the last 24 hours, topping the previous peak of 97,894 daily cases recorded in late September. Fatalities rose by 478, raising the country’s death toll to 165,101.

India now has a seven-day rolling average of more than 73,000 cases per day and infections in the country are being reported faster than anywhere else in the world.

The biggest contributor to the surge has been the western state of Maharashtra, home to the commercial capital of Mumbai. The state has contributed more than 55% of total cases in the country in the last two weeks.

The state will start shutting cinemas, restaurants, shopping malls and places of worship from Monday evening. Authorities will also impose a complete lockdown at weekends.

Sri Lanka received the donation of 600,000 doses last week but won’t administer it to Sri Lankans until it gets clearance from the World Health Organization.

Sri Lanka has used the Oxford-AstraZeneca vaccine since January to vaccinate more than 903,000 people. It also plans to buy 7 million doses of the Russian Sputnik V vaccine.

MANILA, Philippines — The Philippine government extended a lockdown by another week Monday after an alarming spike in coronavirus infections continued to surge and started to overwhelm many hospitals in the capital and outlying regions.

President Rodrigo Duterte placed Metropolitan Manila and four outlying provinces, a region of more than 25 million people, back under lockdown last week as daily infections breached the 10,000-mark. Leaders of the dominant Roman Catholic church shifted its Holy Week and Easter events online after all public gatherings, including in places of worship, were temporarily banned.

The government-run Lung Center of the Philippines became the latest hospital in the capital region to announce over the weekend that it can no longer accept walk-in patients after its COVID-19 ward reached full capacity while its emergency room was now handling twice its capacity.

Other hospitals said they could take steps to expand bed capacity but there was inadequate number of medical workers partly because many had also been infected.

The Philippines has reported more than 795,000 COVID-19 cases with 13,425 deaths, the highest totals in Southeast Asia after Indonesia.

BEIJING — COVID-19 cases in the southwestern Chinese city of Ruili bordering on Myanmar have now topped 100.

That comes as authorities have launched an aggressive campaign to vaccinate all 300,000 residents of the city, whose outbreak is something of an anomaly in a country that appears to have all-but eliminated local transmission of the virus.

The National Health Commission reported an additional 20 cases on Monday, five of them in which the persons showed no symptoms.

The cases were detected during city-wide nucleic acid testing, bringing the city’s total to 51 confirmed cases and 56 asymptomatic cases, which China has placed in a separate category.

Confirmed cases are treated in hospital while those who test positive without showing symptoms are isolated and placed under isolation.

Ruili on Friday launched a five-day drive Friday to vaccinate its entire population, with state media showing people lining up to get the jab.

Some of those infected are Myanmar nationals and authorities have offered free vaccinations to foreigners living and working in the city.

Residents have been order to quarantine at home and non-essential businesses have been closed. Security measures have also been tightened along the porous border to prevent illegal crossings.

ROME — Priests, nuns and other people living in community settings are among the vaccination priority groups permitted under Italy’s revised national rollout. The country’s Piedmont region is going a step further by opening a special vaccine center just for the leaders of religious communities.

Medical personnel at the Cottolengo hospital complex in Turin are set to administer the vaccine to official representatives of Buddhist, Catholic, Jewish, Muslim, as well as Waldensian and other non-Catholic institutions in Piedmont starting Wednesday.

The shots must be given in accordance with the national plan that requires the general population to be vaccinated in descending order of age, beginning with individuals 80 or older or have grave disabilities, then moving down the rollcall to those in their 70s,

HONOLULU — Hundreds of Special Olympics athletes with intellectual disabilities have received their first dose of the coronavirus vaccine at a facility in Hawaii.

Physicians and medical employees from Kaiser Permanente worked in tandem with Special Olympics Hawaii to administer shots at Consolidated Theatres Kapolei on Saturday.

More than 250 people attended to receive their first shot of the Pfizer vaccine.

Kaiser Permanente hosted the vaccination clinic to inoculate community members who are at higher risk of severe illness after contracting the virus.

Daniel Epstein, president and CEO of Special Olympics Hawaii, said social isolation is one of the challenges that individuals with intellectual disabilities often deal with and the pandemic has exacerbated this.

KYUK-AM reported Wednesday that the tribes can take as long as three years to spend these funds, unlike a similar bill that was passed in 2020, which had a shorter deadline.

Teresa Jacobsson from the Alaska Tribal Administrators Association says tribes will have more leeway on how to spend the funds compared to previous legislation, but tribes still will be required to document their spending because records will be reviewed by auditors.

They can spend part of the federal funds to get professional help to manage the spending, but Jacobsson said beneficiaries will have to be cognizant of consultants and contractors who have taken advantage of tribes who have received virus relief funds in the past.

LA PAZ, Bolivia — Two nurses in Bolivia are in jail after being accused of stealing 500 COVID-19 vaccines in a small town on the border with Brazil.

Prosecutor Javier Colque requested two months of detention for the women at a hearing Saturday night in the small city of Guayaramerín in the Amazon.

Sealed boxes containing the vaccines were stolen on Thursday from a medical facility in Guayaramerín and were returned the next day by two hooded men who fled, according to authorities. However, Dr. Maicol Borches, coordinator of the city’s health network, said the vaccines won’t be used because they weren’t refrigerated after the theft.

WASHINGTON — Johnson & Johnson is taking over “full responsibility” for a subcontractor’s Baltimore facility that produces the drug substance for its single dose COVID-19 vaccine after an embarrassing mix-up.

The company says it’s adding leaders in operations and quality control to the Emergent BioSolutions plant to supervise the work of its vaccine line.

It comes after enough drug substance for about 15 million doses was contaminated by human error at the plant. The issue was flagged to federal regulators, who have yet to approve any doses from the Baltimore plant, last week.

J&J has delivered about 20 million doses from another plant to the federal government already and says it expects to deliver about 80 million more by the end of May.

DAMASCUS — Scores of Syria’s Christians gathered for prayers in one of Damascus’ largest Churches on Sunday, the second Easter under pandemic restrictions.

Church-goers eschewed masks but maintained their distance in the Our Lady of Damascus Church, many praying for a way out of the economic and political crises in the war-torn country that have become more dire during the pandemic.

Syria is witnessing a sharp increase in confirmed coronavirus cases. Intensive care units in the capital are full, and hospitals prepared for an influx of COVID-19 patients. The country has not yet started a national vaccination campaign.

So far, the war-ravaged country has reported more than 19,000 confirmed cases, including nearly 1,300 deaths. But the numbers are likely much higher given Syria’s battered health care system and sparse testing.

In territories outside of government control, there are about 30,000 infection cases reported in the west and east of the country.

Church celebrations offered a respite from the pandemic, unemployment and inflation.

“We know that outside the country everyone is in a lockdown and closing down. But for us, this celebration is joyous,” Jimmy Babek, a Christian scout at Our Lady of Damascus, said. “We can’t stop everything. We need to be happy.”

The Latest: Alaska opens vaccines to all 16 or older