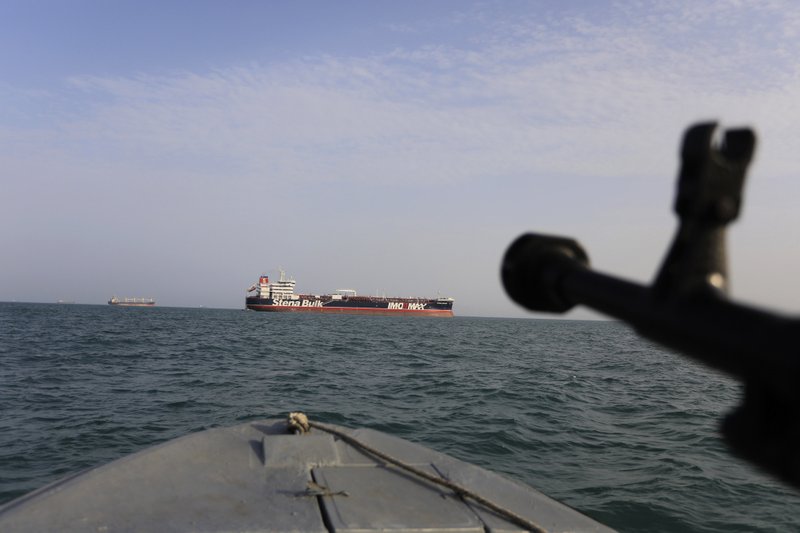 DUBAI, United Arab Emirates (AP) — The Latest on tensions in the Persian Gulf (all times local):

Speaking Wednesday during a regular Cabinet meeting, Rouhani said if Britain reverses its “wrong actions, including what they did in Gibraltar,” then “they will receive a proper response from Iran.”

Rouhani added that while Iran does not seek a military conflict, it will not allow threats to its security in the Persian Gulf and Strait of Hormuz. He described as “professional and brave” Friday’s seizure by Iranian paramilitary forces of the U.K.-flagged ship in the strait.

Both sides have called the interception of one another’s ships “hostile acts” and “piracy”.

Iran has again denied that any of its drones were intercepted after the U.S. military said it took aim at two of them last week.

U.S. Central Command said Tuesday that one Iranian drone crashed into the sea after the USS Boxer took what Central Command called “defensive action” against it last Thursday. It said the Boxer also “engaged” a second Iranian drone at the same time, but could not confirm it was destroyed.

Iran’s defense minister, Gen. Amir Hatami, told reporters Wednesday that “if someone claims he should provide evidence,” adding that “none of our drones have been intercepted.”

He says that when Iran shot down a U.S. drone last month it shared images of the wreckage to verify it.

A large British-flagged vessel has transited the Strait of Hormuz in the first such passage made by a British ship since Iran seized a U.K.-flagged tanker last week.

Maritime publication Lloyd’s List identified the vessel as BW Elm and reported that British warship HMS Montrose closely shadowed the vessel but did not provide a direct escort. The Royal Navy could not immediately be reached for comment.

Data on tracking site Marine Traffic showed the commercial ship arrived at a port in Qatar early Wednesday after transiting the strait.

In a statement to the AP, the ship’s owner BW LPG declined to comment on specifics, but said the company “is grateful for the U.K. and international community for their naval presence” providing security to ships in the area.

In this Sunday, July 21, 2019 photo, a speedboat of Iran’s Revolutionary Guard trains a weapon toward the British-flagged oil tanker Stena Impero, which was seized in the Strait of Hormuz on Friday by the Guard, in the Iranian port of Bandar Abbas. Global stock markets were subdued Monday while the price of oil climbed as tensions in the Persian Gulf escalated after Iran’s seizure of a British oil tanker on Friday. (Morteza Akhoondi/Tasnim News Agency via AP)

Final hours of voting in race to become British PM