Three British nationals caught trying to smuggle large numbers of automatic weapons' ammunition, sniper rifles, laser and wireless devices, bulletproof vests, helmets and spare weapons parts into the country have been refered to Supreme State Security Prosecution in Cairo after having been

Police apprehended the three suspects in April at the Hurghada Port after they discovered the weapons stash, hidden inside a secret storeroom in a tourist boat on which the three had traveled from Jeddah Port in Saudi Arabia and were headed for the port of Suez. They have been held in Hurghada since their arrest.

Public Prosecutor Abdel Meguid Mahmoud ordered Judge Mohamed al-Gamal, head of Hurghada's prosecution, to complete the papers needed and include the investigations of Hurghada Police and the National Security Agency, also ordering that the suspects be transported to Cairo.

The British Embassy in Cairo sent a letter to Hurghada's prosecution saying it had no link with the incident or the suspects.

According to investigators, the defendants corresponded with Hurghada’s tourist marina and enquired closely about the costs and security procedures that they would have to go through.

Since the beginning of the January 2011 revolution, Egyptian authorities have seized weapons inside and at entrance points around the country. Weapons were also stolen from police departments after the ouster of President Hosni Mubarak. 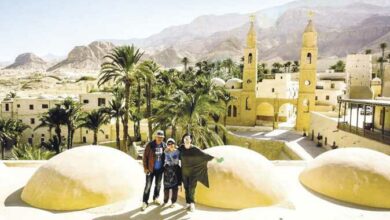