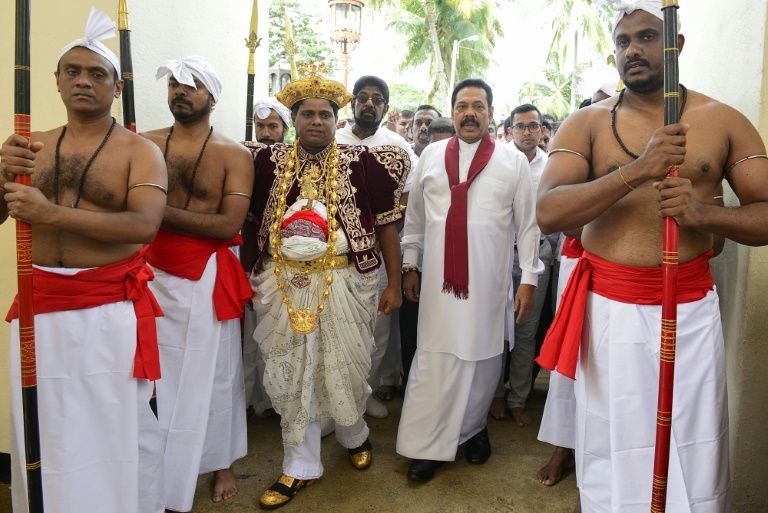 It was the first report of serious violence since President Maithripala Sirisena sacked Wickremesinghe on Friday and installed a former strongman as the new prime minister, triggering political chaos in the Indian Ocean nation.

Wickremesinghe has refused to vacate the prime minister’s official residence since being controversially deposed, declaring his dismissal illegal and demanding an emergency session of parliament to prove he still commands a majority.

Over 1,000 supporters and loyalists, including chanting Buddhist monks, massed outside the colonial-era residence in Colombo where a defiant Wickremesinghe has been holding crisis talks with allies.

Elsewhere his successor Mahinda Rajapakse, a former president, sought blessings at a temple ahead of naming a new cabinet, as he jostles to consolidate his claim to the prime ministership.

Officials loyal to Rajapakse said police will now seek a court order to evict Wickremesinghe from the residence, threatening to escalate the standoff.

Regional neighbors and Western nations have urged all sides to exercise restraint and respect the constitution.

Soldiers had been stationed near the prime minister’s residence — although his security and official cars were withdrawn Saturday — but the shooting at the petroleum ministry was the first reported instance of violence breaking out.

The speaker backed the ousted prime minister’s request to retain his privileges and security until another candidate could prove a majority, saying it was “democratic and fair.”

Wickremesinghe called for a vote in parliament to prove his right to hold office — but instead Sirisena shut parliament for nearly three weeks to forestall any challenge against Rajapakse’s appointment.

Speaker Jayasuriya warned the president that shuttering parliament risked “serious and undesirable consequences for the country”.

Others feared the crisis could degenerate into street violence if the president did not immediately summon parliament to end the impasse.

“If the president has the numbers he should immediately call parliament and prove his majority.”

President Sirisena is due to address the nation later Sunday, his office said.

Loyalists to Rajapakse — whose controversial decade-long rule was marked by grave allegations of rights abuses, the crushing of the Tamil Tiger uprising, and growing authoritarianism — still control the headquarters of two state-run television channels.

The controversial new prime minister travelled to a highly venerated Buddhist temple Sunday in the central district of Kandy to seek blessings from monks.

Rajapakse’s aides said he was likely to name a few cabinet ministers before the end of the day and begin work on Monday — he is yet to make a formal statement since being elevated to the new post.

The strongman is seen as being closer to China than Wickremesinghe, who had sought to re-establish stronger ties with traditional ally and regional power India.

The crisis has again put the Indian Ocean in the international spotlight following turmoil in neighboring Maldives over its presidential election.

India said it was “closely following” events in Colombo.

“As a democracy and a close friendly neighbor, we hope that democratic values and the constitutional process will be respected,” India’s foreign ministry spokesman Raveesh Kumar said Sunday.

The United States and European Union ambassadors in Colombo have called on the Sri Lankan rivals to follow the constitution and avoid violence.

However, Rajapakse loyalist and former foreign minister G. L. Peiris said there was nothing illegal about sacking Wickremesinghe and challenged him to prove his majority when parliament returns on November 16.

The falling out between Wickremesinghe and Sirisena has come to a head since the president this year backed a no-confidence motion against the man he had handpicked to lead the government.

The two allied against Rajapakse in the 2015 election, but their relationship steadily soured.

Sirisena initially said he would be a one-term president but has since indicated he will seek re-election next year — pitting himself against Wickremesinghe who also has presidential ambitions.

This is the second time that a president has ousted Wickremesinghe from office. In 2004, the then head of state sacked him and called snap elections.

After winning the premiership a third time in August 2015, Wickremesinghe amended the constitution to remove the president’s power to sack prime ministers to prevent a repeat of his earlier ouster.

Yazidi mothers of children by IS face heartbreaking choices