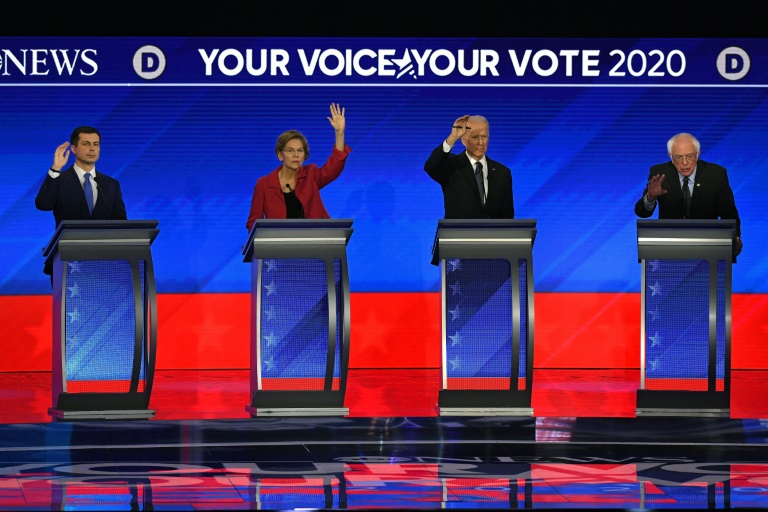 White House hopefuls Bernie Sanders and Pete Buttigieg — riding neck-and-neck in the polls ahead of the next Democratic primary contest — come under sustained attack on the debate stage from rivals seeking to challenge Donald Trump in November.

Buttigieg, a former mayor of South Bend, Indiana who at 38 is a fresh face on the national stage, defended himself against charges of inexperience and, in a dig at Sanders, urged Americans to elevate a nominee who will “leave the politics of the past in the past.”

The 78-year-old leftist Sanders, eyeing the moderate Buttigieg as his possible chief adversary, aimed his own shots at his far younger rival in the Manchester, New Hampshire debate — casting him as the candidate of Wall Street.

“I don’t have 40 billionaires, Pete, contributing to my campaign,” Sanders said.

Buttigieg and Sanders finished atop the pack earlier this week in Iowa’s chaotic caucuses, and both hope to renew the performance Tuesday in New Hampshire, as the Democratic Party seeks to pick a challenger to Trump in November.

But Sanders, a veteran senator calling for “political revolution,” was in the firing line from several rivals, including former vice president and fellow septuagenarian Joe Biden who branded his policies too radical to unite Americans.

The 77-year-old Biden, fighting to keep his White House hopes alive after finishing an unnerving fourth in Iowa, insisted liberal policies like Sanders’s flagship universal health care plan would be too divisive, expensive and difficult to get through Congress.

“How much is it going to cost?” Biden asked about Sanders’s Medicare for All bill which estimates the project would cost tens of trillions of dollars.

“Who do you think is going get that passed” in Congress?

Biden performed more aggressively than in previous showings, seizing a chance to argue that today’s global tensions required an experienced statesman to guide the nation out of a dark period.

Despite the Iowa setback he also made plain he still views himself as best placed to mount a centrist challenge to the Republican Trump, who this week survived an impeachment trial that did little to dent his electoral support.

A national unknown one year ago, Buttigieg has run an ambitious campaign that resonated with voters who appreciate his articulate explanations of policy.

But rivals including Senator Amy Klobuchar argued Buttigieg is an untested novice on the world stage.

“We have a newcomer in the White House, and look where it got us,” she said in a gibe at both Buttigieg and Trump.

Buttigieg draws on his experience as a military veteran to cast himself as a credible commander-in-chief.

And he advanced his central argument for generational change as the best way to take on the nation’s tests.

“The biggest risk we could take at a time like this would be to go up against the fundamentally new challenge by trying to fall back on the familiar,” Buttigieg said.

Klobuchar, a pragmatist from Minnesota, put in a forceful performance as she voiced her opposition to Sanders and Warren, arguing their liberal plans would only divide voters.

“Truthfully, Donald Trump’s worst nightmare is a candidate that will bring people in from the middle,” she said.

While Biden held his own, he acknowledged he was fighting an uphill battle in the first two voting states.

“I took the hit in Iowa and I’ll probably take it here,” he said, in apparent recognition that Sanders is likely to win New Hampshire, which borders his home state of Vermont.

Democratic tensions have simmered as the party struggles to decide whether to take incremental progressive steps or a more radical turn as proposed by self-declared democratic socialist Sanders.

At one point candidates were asked whether they would be concerned should a democratic socialist win the nomination. Klobuchar and others raised their hands.

As the seven debaters clashed, another candidate loomed in the background.

Former New York mayor Michael Bloomberg chose to ignore the early nominating contests and has spent heavily on advertising, hoping to make a splash on “Super Tuesday” on March 3, when 14 states vote.

Warren, who calls for an end to the “corruption” of Washington, lashed out against Bloomberg — but also Buttigieg — who has raised large sums from wealthy donors.

“I don’t think anyone ought to be able to buy their way into a nomination or being president,” she said.