Minister of Tourism Rania Al-Mashat announced that the number of tourists visiting Egypt has jumped by 30 percent during the first quarter of 2018 compared to last year. The announcement came during a press conference on the sidelines of the Arabian Travel Market exhibition taking place in Dubai. Mashat added that tourism now represents 15 percent of the total sources of income for the national economy.

Mashat attributed the success to the latest campaign efforts for Egyptian tourism, adding that new methods will be followed to attract more tourists in the coming period. These new methods will include a new campaign to encourage flying to Egypt, in cooperation with the Minister of Civil Aviation Sherrif Fathy, as well as an elaborate social media campaign, that makes the best use of the internet to promote tourism.

The campaign will aim at showcasing Egypt and bringing “virtual happiness” to people, thereby encouraging them to visit. Another campaign will be launched in parallel targeting Arab tourists in the Gulf area in Ramadan to encourage them to visit Egypt during the feast, as well as during the rest of the summer.  She also added that Egypt now has eight international offices to promote tourism in different regions.

She added that Egypt will begin targeting new regions for tourism such as Gabal Al-Galala in Al-Ein Al-Sohkna, as well as Al-Alameen in the North Coast.

Finally, Mashat expressed her happiness towards the resumption of Russian flights to Egypt after almost a two-year ban.

Egyptian aviation officials will hold a meeting with their Russian counterparts in May to discuss the return of Russian flights to Sharm El Sheikh and Hurghada after a two-and-a-half-year flight suspension. Russian flights were banned in Egypt following the downing of a Russian plane over the Sinai in 2015, killing everyone onboard.

Russian tourists formerly had the lion’s share of tourism in Red Sea pearls Sharm El-Sheikh and Hurghada until the decision to suspend flights.

According to Russian state media outlet Russia Today, at least 3.16 million tourists are expected to visit Egypt following Russia’s decision to lift a ban on direct flights to Cairo.

Minister of Tourism Rania Al-Mashat took office in January 2018. She is a leading expert in monetary policy and international economics, who has worked with leading international financial institutions. 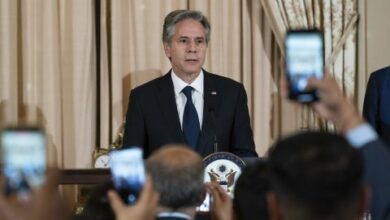 Egypt has the potential to become regional center for innovation: Mashat