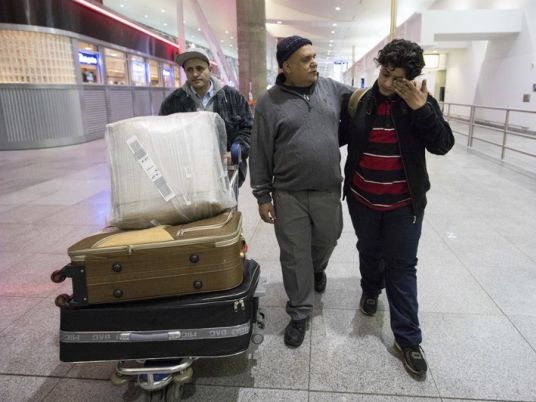 Travelers from the seven predominantly Muslim countries targeted by President Donald Trump enjoyed tearful reunions with loved ones in the US on Sunday after a federal judge swept the ban aside.

Airlines around the world allowed people to board flights as usual to the United States. One lawyer waiting at New York's Kennedy Airport said visa and green-card holders from Iraq and Iran were encountering no problems as they arrived.

"It's business as usual," said Camille Mackler, of the New York Immigration Coalition.

Fariba Tajrostami, a 32-year-old painter from Iran, came through the gate at Kennedy with a huge smile and tears in her eyes as her brothers greeted her with joyful hugs.

"I'm very happy. I haven't seen my brothers for nine years," she said.

Tajrostami had tried to fly to the US from Turkey over a week ago but was turned away.

Tajrostami said she hopes to study art in the US and plans to join her husband in Dallas soon. He moved from Iran six months ago, has a green card and is working at a car dealership.

Similar scenes played out across the US two days after a federal judge in Seattle suspended the president's travel ban and just hours after a federal appeals court denied the Trump administration's request to set aside the ruling.

The US canceled the visas of up to 60,000 foreigners in the week after the ban on travel from Syria, Iraq, Iran, Sudan, Somalia, Libya and Yemen took effect, according to the State Department. Trump also suspended nearly all refugee admissions for 120 days and barred Syrian refugees indefinitely.

The order triggered protests and a multitude of legal challenges around the country and blocked numerous college students, researchers and others from entering the US.

Trump, who said the goal was to keep terrorists from slipping into the country, lashed out against US District Judge James Robart for putting the ban on hold. He referred to Robart as a "so-called judge" and called the ruling "ridiculous."

On Sunday, the president tweeted: "Just cannot believe a judge would put our country in such peril. If something happens blame him and court system. People pouring in. Bad!"

Ali and his mother, Musarlah Alghazali, had left Yemen a year and a half ago to Egypt because of the war at home. Musarlah came to the US two and a half months ago, but Ali stayed behind in Egypt with cousins while he waited for his visa to be approved. The boy was not able to leave until last Saturday, after the executive order was in effect.

"When he went to the airport to come over here they stopped him last week, Saturday. I tried again the next week, Thursday, but they put him back again," Abdullah said. "They said they had an order from the US government to not allow anybody with a visa or green card to come to the United States."

Mahsa Azabadi, 29, an Iranian-American who lives in Denver, was forced to put her wedding plans on hold after her fiance, Sorena Behzadfar, was turned away when he tried to board a plane to travel from Iran to the US on January 28.

Over the weekend, though, Behzadfar was cleared for travel and was expected to arrive at Boston's Logan Airport on Sunday afternoon.

"It's been a really tough week to figure out what will happen to us," said Azabadi, who has lived in the US for 11 years and is now a US citizen.

The couple is hoping to keep their wedding date of May 12.

"Seeing the support from the lawyers and different people trying to help, it was really nice," she said. "We want to be the best and do the best for the people and for this country. We would love to have the opportunity."

An Iranian woman attempting to return home from Iran after initially being blocked from entry cleared through an immigration check in Boston and was expected to return home to Clemson, South Carolina, on Monday.

Nazanin Zinouri was taken off a plane in Dubai days after the travel ban went into effect. Zinouri, a legal US resident, had traveled to Iran last month to visit family.

Eric Martinez, the founder of the startup technology firm where Zinouri works, said she planned to watch the Super Bowl on Sunday in Boston.

Iranian researcher Nima Enayati, a PhD candidate at a university in Milan, was prevented from boarding a flight to the US on January 30. He had a visa to conduct research on robotic surgery at Stanford University in California.

On Sunday night, he arrived in New York.

"It feels great finally I'm here," Enayati said at JFK. "Considering the last 10 days we had no idea if we'll be able to make it or not."

Enayati said he feels safe for now, but worries that the travel ban could inhibit research in the future.

"We always had this open collaboration around the world," he said. "We never had concerns about whether we would be able to go somewhere physically or not."

At Cairo Airport on Sunday, officials said a total of 33 US-bound migrants from Yemen, Syria and Iraq boarded flights.

Lebanon's National News Agency said airlines operating out of Beirut also began allowing Syrian families and others affected by the ban to fly. Beirut has no direct flights to the US; travelers have to go through Europe.

At Kennedy, a team of volunteer lawyers that had set up operations in a diner to help arriving passengers during the height of the crisis packed up computer equipment and paperwork. A few volunteers and interpreters will stay behind just in case.