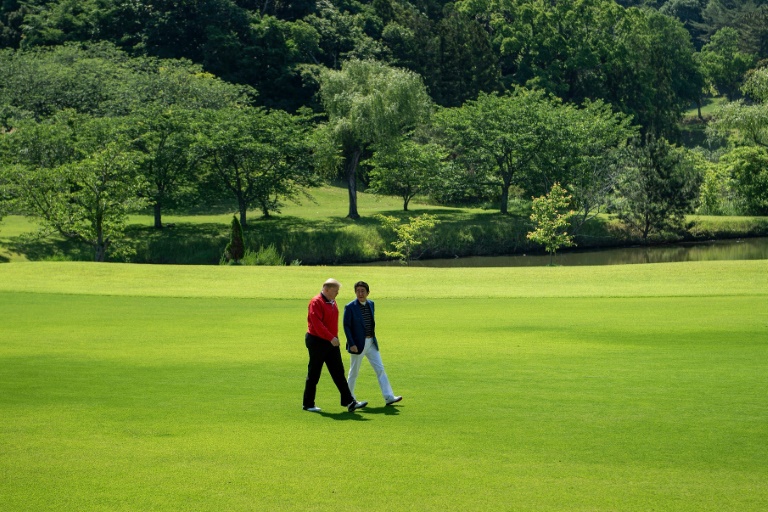 US President Donald Trump on Sunday played down recent missile launches by North Korea as he teed off a state visit to Japan with a round of golf with Prime Minister Shinzo Abe.

Before hitting the course, Trump tweeted that North Korea had tested “some small weapons” that had “disturbed some of my people, and others, but not me”.

This appeared to be a reference to one of his “people”, National Security Advisor John Bolton, who had said the previous day there was “no doubt” the launches had contravened UN Security Council resolutions.

But Trump said: “I have confidence that Chairman Kim will keep his promise to me.”

The American president maintains that North Korea’s leader Kim Jong Un had pledged he was serious about denuclearisation although experts say there is still a wide gulf between the two sides over what that means exactly.

At their summit, Trump and Abe are likely to touch on tensions with North Korea, which have mounted after a summit in February in Hanoi collapsed without an agreement, as well as trade as Tokyo and Washington attempt to thrash out a deal.

On trade, Trump tweeted that “great progress” was being made in the negotiations but “much will wait” until after Japanese upper house elections expected in July — with rumors rife Abe might also call a snap general election at the same time.

The serious diplomacy starts on Monday, when Trump will be the first leader to meet Japan’s new emperor, Naruhito, who has been on the Chrysanthemum Throne for less than a month following his father’s historic abdication.

But Sunday was more about cementing diplomatic bonds between the two countries over the leaders’ shared passion for golf — the fifth time they have found time in their schedules for a round.

Under a cloudless sky with sizzling temperatures above 30 degrees Celsius (86 Fahrenheit), the two world leaders played at the Mobara Country Club course in Chiba, just outside the capital.

Aerial footage on Japanese television showed the pair practicing and teeing off, as well as putting on the manicured greens, accompanied by former professional golfer Isao Aoki.

As Trump’s Marine One helicopter thundered in, shattering the serenity of the course, a casual-looking Abe was there to greet him, sporting white trousers and a blue top. Trump was dressed in a red sweater and black trousers with a red USA cap.

Abe later tweeted a selfie of the two grinning into the camera, as the pair relaxed before the formal element of Trump’s four-day trip begins.

After the golf, the two leaders were set to take in the final day of the sumo “basho” or tournament in Tokyo. Trump will present Japanese grappler Asanoyama with the “President’s Cup” — weighing 60-70 pounds (27-32 kilograms) and measuring 54 inches (1.4 metres).

Security around the hallowed Ryogoku Kokugikan sumo stadium was ultra-tight, with fans screened with metal detectors and asked to sip from any bottle they planned to take in to prove the liquid was not dangerous.

With fans being screened, there were long queues to get into the arena with spectators waiting in an unseasonable heatwave.

“I thought we would see some level of tight security. But I didn’t realize that it was going to be this much,” 76-year-old Hisato Koizumi from Tokyo told AFP as he waited in a long line for metal detectors and safety inspections.

“We got today’s tickets by chance. I don’t like this,” added Koizumi.

“This is truly overkill. (The Trump visit) is not enjoyable. It’s a pain. There aren’t so many bad people in Japan,” she said.

Excitable fans were also warned against throwing their seat cushions — as tradition dictates whenever a yokozuna or grand champion is felled — lest the president be hit.

“Acts such as throwing of cushions inside the arena may result in ejections and punishments. Please absolutely refrain from doing so,” a flyer said, according to footage from national broadcaster NHK.

“We shall not sell tickets in the future to those who carry out these acts.”

While Abe and Trump were at the golf course, their wives Melania and Akie enjoyed a display of “digital art” at an exhibition that has been a smash hit in Tokyo.

Image: AFP / Brendan SMIALOWSKI Donald Trump and Japanese PM Shinzo Abe headed to the golf course before the more formal parts of the US President’s visit

Trump, Abe to burnish ties over golf, sumo and steak