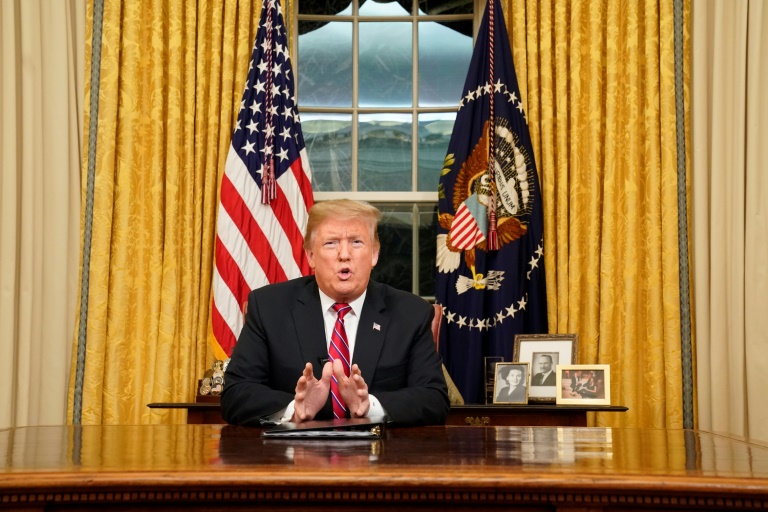 President Donald Trump used a prime-time address to the nation Tuesday to insist on $5.7 billion for a steel wall along the Mexican border that he said would stop the shedding of “American blood” by illegal immigrants.

The nine-minute speech from the storied Oval Office in the White House contained no concessions to Democrats refusing to fund construction of the wall — a project Trump has made his signature domestic policy idea.

The address also offered no hope for a quick end to a government partial shutdown triggered by the row that has left 800,000 federal employees without pay.

However, Trump did steer away from earlier predictions that he might announce a national emergency, which would have given him the power to authorize the wall project without congressional approval, likely triggering an even deeper political crisis.

Trump spoke in an unusually measured voice, apparently hoping to claim the moral high ground, and said he wanted to bridge the political divide in what could be the defining power struggle of his turbulent presidency.

“I have invited congressional leadership to the White House tomorrow to get this done. Hopefully, we can rise above partisan politics in order to support national security,” he said. “This situation could be solved in a 45-minute meeting.”

Despite that softer tone, Trump also spent much of the speech doubling down on his controversial message — popular among his right-wing base — that illegal immigration at the US-Mexican border is above all a threat to the lives of Americans.

He listed gruesome examples of crimes committed by illegal immigrants, including a “beheading and dismembering,” and said he would “never forget the pain” of survivors he’d met.

“How much more American blood must we shed before Congress does its job? For those who refuse to compromise in the name of border security, I would ask to imagine if it was your child, your husband, or your wife whose life was so cruelly shattered and totally broken,” he said.

That, to opponents, is at best fear mongering for political purposes — or race baiting at worst.

Democratic leader Nancy Pelosi said in her instant rebuttal speech that the real problem was Trump’s “cruel and counter-productive policies” making the border ever more dangerous for vulnerable migrants, including young families.

Fact-checking teams at US media outlets quickly took issue with a number of Trump’s assertions — for instance, his statement that every day US agents at the border with Mexico “encounter thousands of illegal immigrants trying to enter our country.” That number is vastly overstated, CNN and The New York Times said.

Also wrong are Trump’s assertions that 90 percent of the heroin entering the US crosses over from Mexico and that Mexico, indirectly, via a new trade agreement with the US and Canada, would end up paying for a wall, the Times said.

The speech offered no hope of a resolution to the government shutdown that started 18 days ago as a negotiating tactic but has turned into a symbol of dysfunctional Washington politics — and increasingly a painful situation for unpaid workers.

Salaries were put on hold for large numbers of employees when Trump refused to sign government spending bills as a way of trying to strongarm the Democrats into funding his wall.

Pelosi, who is speaker of the Democrat-held House of Representatives, accused Trump of “holding the American people hostage.”

Chuck Schumer, the Democratic leader in the Senate, accused Trump of governing “by temper tantrum” and using government workers “for leverage.”

There had been speculation that Trump might give way in parts of his speech, for example lowering the sticker price for the wall, or offering Democrats flexibility on other areas of immigration policy.

However, it was also significant that he did not announce a national emergency, which would have theoretically given him the right to charge ahead alone, getting the money from the military.

Democrats and some Republicans had warned that this would be seen as a dangerous escalation of the row and would be challenged in court.

The Oval Office has witnessed many historic announcements, ranging from George W. Bush’s reaction to the 9/11 attacks to John F. Kennedy’s televised appearance at the height of the Cuban missile crisis.

Trump’s gambit was that the solemn setting will allow him to regain the momentum on the Mexico wall issue that helped him get elected in 2016 and has become an obsessive goal for supporters.

He will follow up with a rare trip to the Mexico border itself on Thursday.

With many Americans far from sold on Trump’s lurid claims about illegal immigrants posing an overwhelming safety threat, the speech faced its own high barrier: credibility.

But the leader of the Republican-held Senate, Mitch McConnell, welcomed the speech and said Trump “reaffirmed his commitment to addressing the humanitarian and security crisis at our nation’s southern border.”