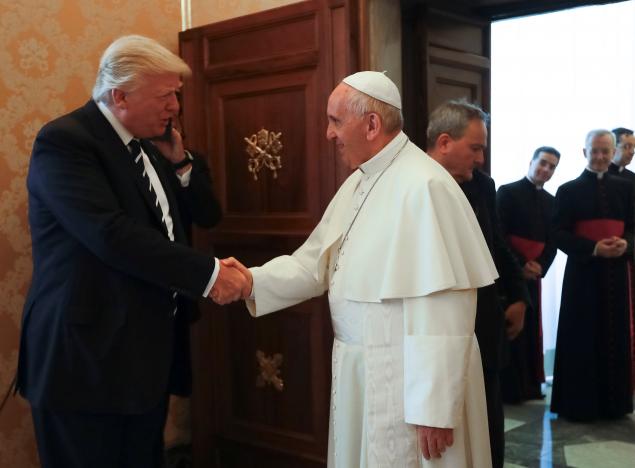 US President Donald Trump met Pope Francis, one of his most high profile critics, at the Vatican on Wednesday and after an exchange of gifts he promised he would not forget the pontiff’s message during their half-hour discussion.

Trump and the pope have expressed opposing views on issues such as immigration and climate change and the two men exchanged sharp words during the presidential campaign last year.

Under clear blue skies, Trump received a tribute from the Swiss Guard in a Vatican courtyard where he was greeted by Archbishop Georg Ganswein, the prefect of the pontifical household.

Trump looked uncomfortable as he entered a small elevator taking him to the third floor of the Apostolic Palace, where he was accompanied by Ganswein and other officials along a frescoed corridor to the pope’s private study.

The pope smiled faintly as he greeted Trump outside the study. Trump, seeming subdued, said: “it is a great honor.”

The two men then posed for photographs and the pope kept a stern face while Trump beamed for the cameras.

At the end of the private encounter the pope, smiling and looking far more relaxed, gave the president a small sculptured olive tree symbolizing peace. Trump thanked him and said, “we can use peace.”

Speaking in Spanish through an interpreter, the pope also gave Trump a signed copy of the message he delivered at the last World Peace Day and three of his major writings including his 2015 encyclical on the need to protect the environment.

He gave the pope a boxed set of writings by Martin Luther King.

As Trump left he told his host, “thank you, I won’t forget what you said.”

Trump’s meeting with Pope Francis, his third stop on a nine-day foreign tour due to end on Saturday, was part of his world tour of religions after meeting leaders of Muslim nations in Saudi Arabia and visiting holy sites in Jerusalem.

While his talks in Saudi Arabia and Israel were mostly friendly, the meeting between the head of the Roman Catholic Church and the thrice-married, blunt-spoken Trump had the potential to be a little more confrontational.

Pope prays for minorities like Yazidis suffering in Mideast

The pope said last year a man who thinks about building walls and not bridges is “not Christian,” a sharp reprimand for Trump’s vow to build a wall along the US border with Mexico.

Trump said it was “disgraceful” of the Argentine-born pope, who represents just over half of the world’s two billion Christians, to question his faith.

“If and when the Vatican is attacked by ISIS, which as everyone knows is ISIS’ ultimate trophy, I can promise you that the pope would have only wished and prayed that Donald Trump would have been president,” Trump said during the campaign.

Trump’s softer stance on environmental regulations also is at odds with Francis’ view that climate change is caused mostly by human activity.

The Vatican also took a dim view of Trump’s anti-Muslim campaign rhetoric, although Trump softened his tone considerably in a major speech in Riyadh.

Francis said last week he would be “sincere” with Trump but did not want to judge him before listening to him in person.

Part of Trump’s motivation for meeting the pope was to dramatize how the three major religions should rally against the threat from Islamist militants.

“We thought that this trip was essential to put together the Muslim faith, the Jewish faith and then the Catholic faith, the Christian faith,” said a senior White House official who briefed reporters on Trump’s Air Force One flight to Rome.

Trump at first did not plan to stop in Rome during his visit to Europe, which some in the Vatican saw as a snub. When he changed his mind, the Vatican squeezed him in at 8:30 am on a Wednesday morning, an unusual day and an unusually early time.

Francis holds his weekly audience with the general public on Wednesday at 10 am in St Peter’s Square.

After the meeting, Trump moves on to Brussels for a NATO summit, followed by the last stop on his trip, at a Group of Seven summit in Sicily.