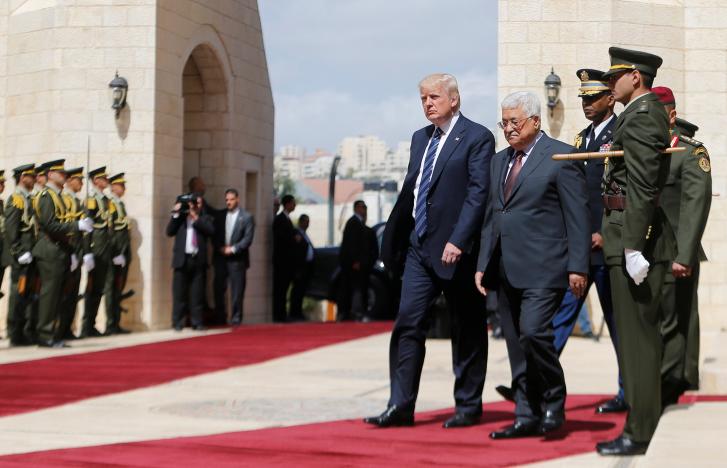 US President Donald Trump talked up the prospects of peace between Israelis and Palestinians on Tuesday, saying he believed both sides were committed to an historic deal, but he offered no concrete proposals on how to get there.

After an hour of talks with Palestinian President Mahmoud Abbas in Bethlehem, in the Israeli-occupied West Bank, Trump condemned the bomb attack in Manchester that killed 22 people, calling the perpetrators “evil losers”. He then moved on to address efforts towards Middle East peace.

“I am committed to trying to achieve a peace agreement between the Israelis and the Palestinians and I intend to do everything I can to help them achieve that goal,” he said, with the 50th anniversary of Israel’s capture of territories that Palestinians seek for a state approaching next month.

“President Abbas assures me he is ready to work towards that goal in good faith, and Prime Minister [Benjamin] Netanyahu has promised the same. I look forward to working with these leaders towards a lasting peace.”

While Trump has spoken frequently in the months since he took office about his desire to achieve what he has dubbed the “ultimate deal”, he has not fleshed out any strategy his administration might have towards achieving it. He also faces difficulties at home, where he is struggling to contain a scandal after firing James Comey as FBI director two weeks ago.

He has appointed his son-in-law, Jared Kushner, as a senior adviser on brokering an agreement, while Jason Greenblatt, formerly a lawyer in Trump’s real estate group, has taken the day-to-day role of liaising with officials and leaders in the region on the nitty-gritty contours of any solution.

The last talks between the Israelis and Palestinians, led by former US secretary of state John Kerry, broke down in April 2014 after around a year of largely fruitless discussion.

While both Netanyahu and Abbas have made positive noises about their readiness to negotiate, both also face domestic constraints on their freedom to manoeuvre and strike a deal.

Netanyahu must deal with opposition from rightist elements within his coalition who oppose any steps towards a two-state solution to the decades-long conflict. Abbas’s Fatah party is at sharp odds with the Islamist group Hamas, which is in power in Gaza, leaving no unified Palestinian position on peace.

Standing alongside Trump, Abbas, 82 and in the 12th year of his original five-year term, said he was determined to deliver an agreement for all Palestinians, although he did not provide any substance on how such an objective could be achieved.

“I would like to reiterate our commitment to cooperate with you in order to make peace and forge an historic peace deal with the Israelis,” he said, speaking through an interpreter.

“And we would like to reassert our willingness to continue to work with you as partners in fighting terrorism in our region and in the world.”

No Details On Peace

Ahead of his visit to the Middle East, the second leg of a nine-day tour that began in Saudi Arabia and will move on to the Vatican, Italy and Belgium, administration officials indicated that Trump might talk about “Palestinian self-determination”, a nod towards the ultimate objective of statehood.

But in his public remarks, Trump steered clear of any such language, and did not mention what has been the goal of US diplomacy for two decades: a state of Israel and an independent Palestinian state co-existing side-by-side.

During meetings with Netanyahu on Monday, Trump focused attention on the threat from Iran but also talked about the opportunities for peace in the region and how Saudi Arabia and other Arab nations were shifting their stance, potentially opening a window towards a regional agreement.

One of the long-standing regional proposals is a Saudi peace initiative that was first put forward in 2002 and has been re-endorsed several times since.

In effect, it would offer Israel recognition by the Arab world and the “normalization” of relations in exchange for a full withdrawal from the territory Israel has occupied since the June 1967 Middle East war, including East Jerusalem. It also urges a “just settlement” of the Palestinian refugee problem.

Netanyahu has expressed tentative support for parts of the initiative, but there are many caveats on the Israeli side, including how to resolve the ever more complex refugee issue and whether Israel would withdraw from the Golan Heights, strategic territory that Israel took from Syria in the 1967 war.

Husam Zumlot, a former adviser to Abbas who is now the Palestinian ambassador in Washington, said the contours of any deal between the Israelis and the Palestinians were well known to both sides. If negotiations were to resume, they needed to be about the core issues, not talks about talks, he said.

Reporting By Jeff Mason in Bethlehem and the West Bank; Additional reporting by Ali Sawafta in Bethlehem and Nidal al-Mughrabi in Gaza; writing by Luke Baker; editing by Jeffrey Heller and Mark Heinrich

Israel makes some concessions to Palestinians before Trump visit