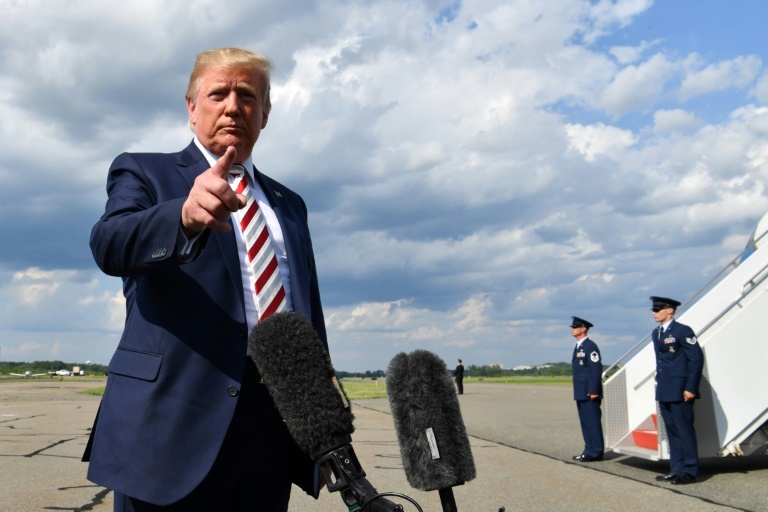 US President Donald Trump on Monday urged Republicans and Democrats to agree on tighter gun control and suggested legislation could be linked to immigration reform after two shootings left 29 people dead and sparked accusations that his rhetoric was part of the problem.

“Republicans and Democrats must come together and get strong background checks, perhaps marrying this legislation with desperately needed immigration reform,” Trump tweeted as he prepared to address the nation on two weekend shootings in Texas and Ohio.

“We must have something good, if not GREAT, come out of these two tragic events!” Trump wrote.

Trump did not explain how the two pieces of legislation might be tied together.

The president has made a crackdown on immigration both legal and illegal a centerpiece of his presidency and even more so of late as he campaigns for re-election next year and reaches out to his largely white, working-class base.

Gun culture is deeply rooted in America, and efforts to strengthen firearms regulations remain divisive even though mass shootings are commonplace.

Legislation calling for stronger background checks on would-be gun purchasers passed in February in the Democrat-controlled House of Representatives but have not even been put to a vote in the Republican-led Senate.

The weekend massacres in El Paso and Dayton were the 250th and 251st mass shootings so far this year, according to the Gun Violence Archive, which counts any attack in which at least four people are killed or wounded, not including the shooter.

The National Rifle Association is a firm supporter of Trump and he has appeared regularly at NRA conferences in recent years.

Trump on Monday appeared to blame the news media and what he considers unfair coverage for violence like the weekend shootings.

Democratic presidential hopefuls tore into Trump over the weekend, calling him a racist whose language emboldens violent extremists.

Former El Paso congressman Beto O’Rourke accused the president of seeking to “drive us apart and make us afraid, angry,” arguing that El Paso proved he was succeeding.

“We’ve seen a rise in hate crimes over the last three years… The writing has been on the wall since that maiden speech describing Mexican immigrants as rapists and criminals,” O’Rourke told MSNBC.

“Anyone who is surprised is part of this problem right now, including members of the media who ask, ‘Hey, Beto, do you think the president is racist?’ Well, Jesus Christ, of course he is. He’s trafficked this stuff from the very beginning. We are reaping what he’s sown and we have to put a stop to it.”

“Fake News has contributed greatly to the anger and rage that has built up over many years. News coverage has got to start being fair, balanced and unbiased, or these terrible problems will only get worse!” he tweeted.

Trump said Sunday that “hate has no place in our country,” but he also blamed mental illness for the violence.

“These are really people that are very, very seriously mentally ill,” he said, although police have not confirmed such a claim.

“We have to get it stopped. This has been going on for years… and years in our country,” he said.

Image: AFP / Nicholas Kamm US President Donald Trump gives a statement about the mass shootings in El Paso and Dayton before leaving New Jersey for Washington

Trump to address nation after US shootings leave 29 dead

Walmart to keep selling guns despite recent shootings at its stores