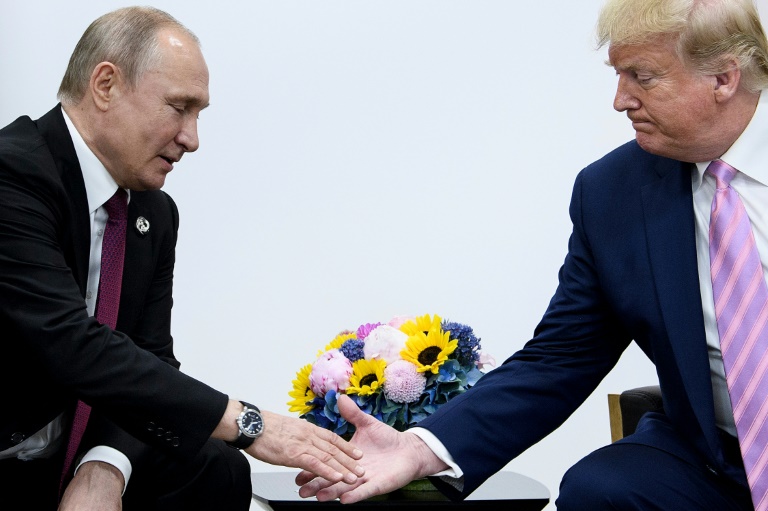 President Donald Trump and his Russian counterpart Vladimir Putin discussed plunging oil prices and the coronavirus pandemic Monday, as Trump said Moscow is pressing for an end to US sanctions.

The two “expressed serious concern regarding the scope of the spread of the coronavirus” and “discussed closer cooperation,” according to a Kremlin statement on what it described as the “lengthy” phone call.

The White House said in a separate statement Trump and Putin had “agreed to work closely together through the G20” against the virus and the economic shock resulting from travel bans and social distancing.

Both statements reported that the oil market turmoil was discussed, with the White House version stating agreement on the “importance of stability in global energy markets.”

The Kremlin version said only that they “exchanged opinions” on oil.

Earlier, Trump had said he was going to use the call to raise objections over a Russian-Saudi price war driving down world oil prices and “really hurting” the US energy industry.

“This is a fight between Saudi Arabia and Russia… and they both went crazy,” Trump told Fox News in an interview shortly before talking to Putin.

“I never thought I’d be saying that maybe we have to have an oil (prices) increase, because we do,” Trump said.

Trump also told Fox he expected Putin would use the call to push for a lifting of US sanctions on Russia.

“He’ll probably ask for that,” Trump told Fox News. “He’s been asking that for two years.”

Trump did not say what his response would be, noting that he had put sanctions on Russia but adding: “They don’t like that. Frankly we should be able to get along.”

Neither the Kremlin nor White House statement mentioned sanctions.

The bulk of US sanctions against Russia were imposed over Moscow’s annexation of Crimea in Ukraine and what US investigators say was a concerted attempt to interfere in the 2016 presidential election won by Trump.

Last Thursday, Putin told G20 leaders during a conference call that he wanted a moratorium on sanctions as a “matter of life and death” during the global coronavirus outbreak.

In the comments Putin did not specify which countries he was talking about but Russia is being hit hard by the economic fallout from coronavirus and the parallel oil price drop.

Another point of US-Russian contention is Venezuela, where Washington, supported by dozens of other countries, has been trying unsuccessfully to promote the toppling of leftist strongman Nicholas Maduro. Russia is one of the few countries propping up his government.

The White House statement said “President Trump reiterated that the situation in Venezuela is dire, and we all have an interest in seeing a democratic transition to end the ongoing crisis.”

The Kremlin statement did not mention Venezuela.

Russian state oil company Rosneft said Saturday it is pulling out of Venezuela and argued that US sanctions on a Rosneft subsidiary — imposed as part of Washington’s attempt to cripple the Maduro government’s revenue sources — should now be lifted.

However, Russia remains a key partner to Caracas.

Trump has often resisted punishing Moscow, which denies meddling in US politics, but his hand on imposing sanctions was forced by his own Republican party in Congress, which sees the Putin government as hostile.

The warm relationship between Trump and Putin — seen by many Western capitals as an increasingly authoritarian leader responsible for assassinations of opponents at home and abroad — has been a constant source of controversy in the United States.

In his Fox interview, Trump dismissed reports that Russia and China are seeking to exploit the coronavirus disruption by planting disinformation aimed at putting the United States in a bad light.

“They do it and we do it,” he said, calling The Washington Post newspaper, which recently reported on the issue, “fake.”

“Every country does it,” he said.

Trump then questioned why Russia was considered an enemy by many in the West. As he has often in the past, he again also cast doubt on what was for decades the rock solid transatlantic alliance between the United States and Germany.

“But you know they also fought World War II, they lost 50 million people. They were our partner in World War II.

“Germany was the enemy and Germany is like this wonderful thing. Well, Germany takes advantage of us on trade for years. They pay far too little in NATO… and now we don’t talk to Russia, we talk to Germany.”

Trump ditches hopes of quick virus bounce-back for US

Why the novel coronavirus became a social media nightmare