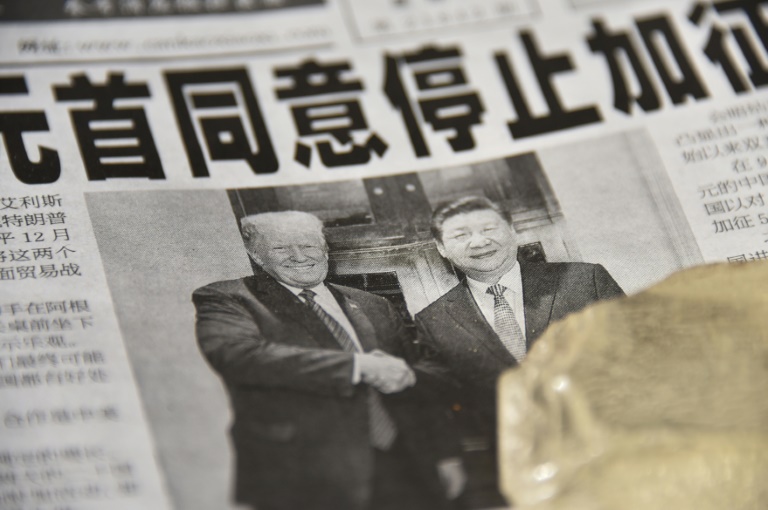 China will roll back tariffs on US-made cars, US President Donald Trump said, unveiling another potential breakthrough in a trade war truce that cheered stock markets on Monday.

Trump’s surprise announcement late Sunday came a day after he and Chinese President Xi Jinping agreed to suspend any new tariffs and give negotiators 90 days to strike a deal.

The ceasefire follows months of tensions and tit-for-tat custom duties on hundreds of billions of dollars worth of goods that raised fears of an escalation harmful to the global economy.

Both sides gained from hitting the pause button, with Trump securing a Chinese pledge to import more US goods and Xi staving off the further pressure that higher tariffs would place on his country’s slowing economy.

Trump tweeted that China had agreed to “reduce and remove” tariffs of 40 percent on cars, though Beijing has yet to confirm the move.

“They agreed to hold off on the imposition of new tariffs and came up with a series of constructive arrangements on how to address the existing differences and problems,” spokesman Geng Shuang told reporters.

Trump’s tweet did not explain which tariffs would be reduced or removed, or when China would act.

William Zarit, chairman of the American Chamber of Commerce in China, said the car announcement, if confirmed, was “certainly movement in the right direction, and hopefully a sign of more things to come”.

Beijing had reduced auto import duties from 25 percent to 15 percent in July. But it later added a 25 percent tariff on US-made cars as trade tensions soared, bringing them to 40 percent.

Many US automakers build their cars in China for the local market, but the tariff hikes have hit sales and profits for some companies including electric car-maker Tesla and US-made models from BMW and Ford.

One expert said China would have to address US complaints about China’s forced transfer of intellectual property rights — a major issue at the core of a US “301” trade investigation — for Washington to drop its tariffs.

“Still, one must presume that as the existing and proposed tariffs are to spur China to address the US’ IPR concerns, only action directly related to that would ultimately impact the 301 tariffs,” he said.

“It prevents the economic and trade frictions from expanding and opens new prospects for cooperation,” Geng said.

Asian and European stock markets jumped on Monday, with Hong Kong and Shanghai closing sharply higher and the yuan strengthening after months of trade-war turbulence.

After being spooked by the conflict, investors returned to buying following the long-awaited meeting between the two presidents.

But observers warned there were still major issues that needed to be resolved, including access for US companies and intellectual property protection.

“It is hoped that the trade teams from both countries will reach as many practical agreements as possible and as quickly as possible to hasten China-US cooperation,” the daily said.

Under the agreement, Trump is shelving a plan to raise tariffs on $200 billion worth of Chinese imports from 10 percent to 25 percent from the start of next year — but the hike will kick in if negotiators fail to reach a final deal within 90 days.

The United States has imposed 25 percent tariffs on another $50 billion worth of Chinese imports and they remain in effect despite the truce.

China has hit back with similar tariffs on $110 billion worth of goods made in the US.

“No magic wand has been waved to make the differences between the United States and China vanish overnight,” the state-run China Daily warned.

“Given the complexity of interactions between the two economies, the rest of the world will still be holding its collective breath while it waits to see if the series of constructive plans that are in the works can put bilateral relations back on a cooperative rather than confrontational track,” it said.

As US retreats, China touts its trade deal wares to Asia