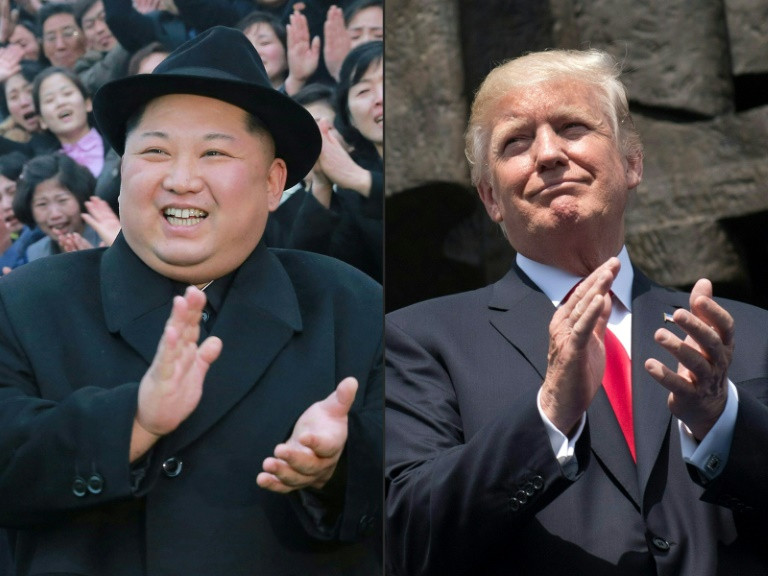 US President Donald Trump sounded a note of caution Wednesday about his much-vaunted summit with Kim Jong Un, saying “we’ll see” after Pyongyang threatened to cancel.

Trump said the US government had not received any official word of a change in plans for the June 12 meeting in Singapore.

“We haven’t been notified at all. We’ll have to see,” Trump said in the Oval Office.

After weeks of warm words and diplomatic backslapping, Pyongyang abruptly threatened to pull out Tuesday, over US demands for “unilateral nuclear abandonment.”

In an angrily worded statement, the North warned “if the US is trying to drive us into a corner to force our unilateral nuclear abandonment, we will no longer be interested in such dialogue.”

In that case, he added, Pyongyang would have to “reconsider” its participation at next month’s summit in Singapore.

“We do not hide our feeling of repugnance towards him,” he said of Bolton.

Bolton has pushed the idea of a deal with North Korea like that reached with Libya’s Moamer Kadhafi, who agreed in 2003 to the elimination of his country’s nuclear program and chemical weapons arsenal to gain sanctions relief.

After giving up his atomic program, Kadhafi was killed in 2011 in an uprising backed by NATO bombing.

A plea from China

Experts have not been surprised by the sudden about face, expecting bumps in the road as tough issues to be discussed in the meeting come into sharper focus.

Washington is pressing for North Korea’s complete, verifiable and irreversible denuclearization. But so far, the North has given no public indication of what it is offering, beyond a broad commitment to denuclearization of the “Korean peninsula.”

Pyongyang “made clear on several occasions that precondition for denuclearization is to put an end to anti-DPRK hostile policy and nuclear threats and blackmail of the United States,” the North Korean minister said.

In the past, Pyongyang has demanded the withdrawal of US troops stationed in the South, and an end to Washington’s nuclear umbrella over its ally.

China, North Korea’s sole major ally, called for the summit to go ahead.

“The situation on the peninsula has eased up, which is worth cherishing,” Chinese foreign ministry spokesman Lu Kang told a regular briefing.

Minister Kim also dismissed offers by US Secretary of State Mike Pompeo for US economic aid if the North denuclearizes.

“We have never had any expectation of US support in carrying out our economic construction and will not at all make such a deal in future,” he said.

During a meeting with his Chinese counterpart Wang Yi, Le Drian said: “Highs and lows can come along as the recent news from the peninsula shows, but we must not lose sight of the goal.”

The White House said plans for the summit were moving ahead.

“The president is ready if the meeting takes place. And if it doesn’t, we will continue the maximum pressure campaign that has been ongoing,” White House Press Secretary Sarah Sanders said.

Pyongyang also raised hopes ahead of the US summit by announcing it will destroy its nuclear testing site next week.

Analysts said Pyongyang appeared to be trying to redefine the terms of the debate.

“It’s a diplomatic tactic,” Kim Hyun-wook, professor at the Korea National Diplomatic Academy, told AFP, calling it “brinkmanship to change the US position.”

“It looks like Kim Jong Un was pushed into accepting US demands for ‘denuclearization-first’ but is now trying to change its position after normalizing North Korea-China relations and securing economic assistance,” he added.

“The classic North Korean tightrope diplomacy between the US and China has begun.”

US officials have repeatedly claimed credit for Washington’s “maximum pressure” policy for bringing Pyongyang to the negotiating table.

Joshua Pollack of the Middlebury Institute for International Studies said Pyongyang had been irritated by the “triumphalist tone.”

“The North Koreans aren’t happy with what they’re seeing and hearing,” he said. “There is still a yawning gulf between expectations for diplomacy in Pyongyang and Washington, DC.”

KCNA also denounced the Max Thunder joint military exercises being held between the US and South Korea as a “rude and wicked provocation,” and Seoul said it had received a message cancelling planned high-level talks “indefinitely.”

The two-week drills started last Friday and involves some 100 aircraft from the two allies, including F-22 stealth fighter jets.

State Department spokeswoman Heather Nauert told reporters it had received “no notification” of a position change by North Korea on next month’s meeting.

The exercises were “not provocative” and would continue, she added.