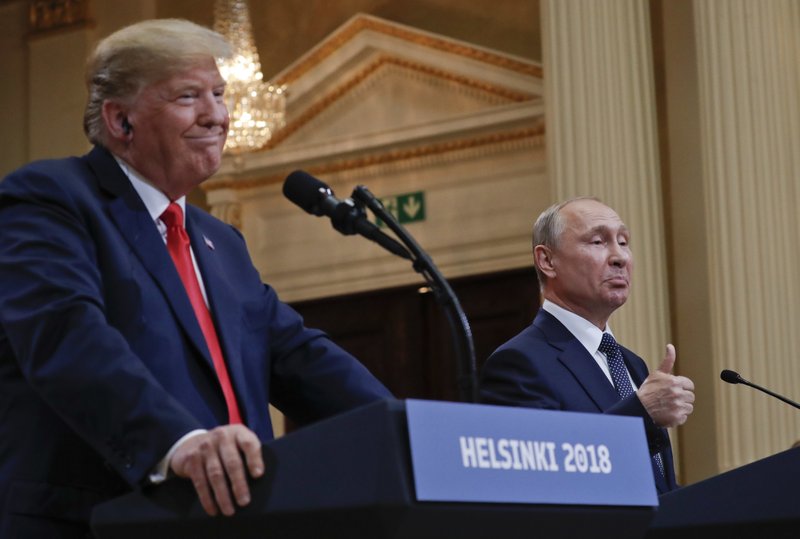 WASHINGTON (AP) — When it comes to Russia, the Trump administration just can’t seem to make up its mind.

For the past three years, the administration has careered between President Donald Trump’s attempts to curry favor and friendship with Vladimir Putin and longstanding deep-seated concerns about Putin’s intentions. As Trump has repeatedly and openly cozied up to Putin, his administration has imposed harsh and meaningful sanctions and penalties on Russia.

The dizzying, often contradictory, paths followed by Trump on the one hand and his hawkish but constantly changing cast of national security aides on the other have created confusion in Congress and among allies and enemies alike. To an observer, Russia is at once a mortal enemy and a misunderstood friend in US eyes.

Even before Trump took office questions about Russia abounded. Now, nearing the end of his first term with a difficult reelection ahead, those questions have resurfaced with a vengeance. Intelligence suggesting Russia was encouraging attacks on U.S. and allied forces in Afghanistan by putting bounties on their heads has thrust the matter into the heart of the 2020 campaign.

The White House says the intelligence wasn’t confirmed or brought to Trump’s attention, but his vast chorus of critics are skeptical and maintain the president should have been aware.

The reports have alarmed even pro-Trump Republicans who see Russia as a hostile global foe meddling with nefarious intent in Afghanistan, the Middle East, Ukraine and Georgia, a waning former superpower trying to regain its Soviet-era influence by subverting democracy in Europe and the United States with disinformation and election interference.

Trump’s overtures to Putin have unsettled longstanding US allies in Europe, including Britain, France and Germany, which have expressed concern about the US commitment to the NATO alliance, which was forged to counter the Soviet threat, and robust democracy on the continent.

But Trump has defended his perspective on Russia, viewing it as a misunderstood potential friend, a valued World War II ally led by a wily, benevolent authoritarian who actually may share American values, like the importance of patriotism, family and religion.

Trump’s approach to Russia was at center stage in the impeachment proceedings, when US officials testified that the president demanded political favors from Ukraine in return for military assistance it needed to combat Russian aggression. But the issue ended up as a largely partisan exercise, with House Democrats voting to impeach Trump and Senate Republicans voting to acquit.

Within the Trump administration, the national security establishment appears torn between pursuing an arguably tough approach to Russia and pleasing the president. Insiders who have raised concern about Trump’s approach to Russia — including at least one of his national security advisers, defense secretaries and secretaries of state, but especially lower-level officials who spoke out during impeachment — have nearly all been ousted from their positions.

Suspicions about Trump and Russia go back to his 2016 campaign. His appeal to Moscow to dig up his opponent’s emails, his plaintive suggestions that Russia and the United States should be friends and a series of contacts between his advisers and Russians raised questions of impropriety that led to special counsel Robert Mueller’s investigation. The investigation ultimately did not allege that anyone associated with the campaign illegally conspired with Russia.

Mueller, along with the US intelligence community, did find that Russia interfered with the election, to sow chaos and also help Trump’s campaign. But Trump has cast doubt on those findings, most memorably in a 2018 appearance on stage with Putin in Helsinki.

Yet despite Trump’s rhetoric, his administration has plowed ahead with some of the most significant actions against Russia by any recent administration.

Dozens of Russian diplomats have been expelled, diplomatic missions closed, arms control treaties the Russians sought to preserve have been abandoned, weapons have been sold to Ukraine despite the impeachment allegations and the administration is engaged in a furious battle to prevent Russia from constructing a new gas pipeline that US lawmakers from both parties believe will increase Europe’s already unhealthy dependence on Russian energy.

At the same time, Trump has compounded the uncertainty by calling for the withdrawal or redeployment of US troops from Germany, angrily deriding NATO allies for not meeting alliance defense spending commitments, and now apparently ignoring dire intelligence warnings that Russia was paying or wanted to pay elements of the Taliban to kill American forces in Afghanistan.

On top of that, even after the intelligence reports on the Afghanistan bounties circulated, he’s expressed interest in inviting Putin back into the G-7 group of nations over the objections of the other members.

White House officials and die-hard Trump supporters have shrugged off the obvious inconsistencies, but they have been unable to staunch the swell of criticism and pointed demands for explanations as Russia, which has vexed American leaders for decades, delights in its ability to create chaos.

Image: FILE – In this July 16, 2018, file photo Russian President Vladimir Putin, right, and US President Donald Trump give a joint news conference at the Presidential Palace in Helsinki, Finland. For the past three years, the administration has careered between President Donald Trump’s attempts to curry favor and friendship with Vladimir Putin and longstanding deep-seated concerns about Putin’s intentions. (AP Photo/Pablo Martinez Monsivais, File)