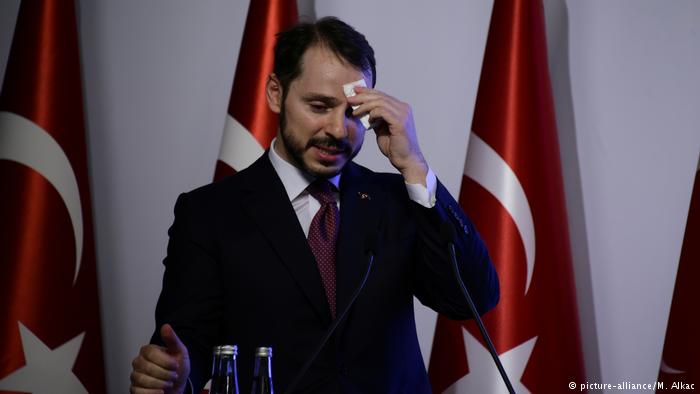 Turkey’s lira hit record lows against the US dollar as the president spoke out again against raising interest rates. But an action plan for the economy has now been promised.

Turkey’s central bank on Monday announced a series of measures to address bank liquidity, marking the first major action to stem a meltdown in the lira that has threatened to morph into a full-blown financial crisis.

The announcement appeared to help reverse what looked to be another day of currency carnage, as the Turkish lira went into freefall in early trading in Asia on Monday to 7.22 against the dollar.  It later pared back losses to settle around 6.85 to the dollar as of 9:30 UTC, compared to a close on Friday of 6.6.

The Turkish lira has lost about 45 percent of its value against the dollar since the start of the year, with a 15 percent nosedive on Friday spooking global markets.

Last week, Goldman Sachs said in a research note that a depreciation of the lira to 7.1 to the dollar would erode Turkish banks’ excess capital.

However, Monday’s central bank announcement made no mention of raising interest rates, a move economists say is necessary to shore up the currency and show that the central bank is independent.

“The decline in the lira is multifaceted, caused not only by a weak external position in terms of current account deficit and inadequate currency reserves, but also the challenging political environment which exacerbates the vulnerabilities in the lira,” said Kerry Craig, global market strategist at JP Morgan Asset Management.

“A mid-meeting rate hike and tightening of monetary policy may help to avert the lira’s decline, to some extent,” he said.

Turkish authorities have meanwhile shot down the idea of reaching out to the International Monetary Fund (IMF).

Analyst Eugene Leow wrote in a DBS Group report fail that “we fail to see how the crisis can be resolved without external support,” but an IMF support package will be difficult “given Turkey’s current political situation.”

President Recep Tayyip Erdogan has repeatedly railed against raising interest rates and lashed out at the United States as the two NATO allies experience their worst falling out in decades over a jailed US pastor and a host of other political issues.

On Sunday, he urged businesses not to pull out foreign currencies from banks. “Otherwise we will set into motion our plan B and C,” he said, without elaborating on the threat.

Businesses should “know that keeping this nation alive and standing isn’t just our job, but also the job of industrialists, of merchants.”

“From Monday morning onwards our institutions will take the necessary steps and will share the announcements with the market,” Albayrak said in an interview late on Sunday night.

Echoing his father-in-law, President Erdogan, whose policies and rhetoric have hurt confidence in the Turkish market, Albayrak called the lira’s weakness an “attack.”

He specifically pointed to the lira being a “direct target” of US President Donald Trump, who last week took to Twitter to attack the currency as he announced new tariffs on Turkish steel and aluminum exports.

Details and implementation of the action plan remained vague, with many of the measures appearing to be medium and long-term projects and not immediate action expected from the markets.

Budget discipline would be the foundation of the new approach, Albayrak said.

“Our precautions” would center on “our banks and the small and medium size enterprises” the treasury and finance minister added. “We will be taking the necessary steps with our banks and banking watchdog in a speedy manner.”

Tax rules would be implemented if necessary, he said, but the government had no plans to seize foreign currency deposits or convert deposits to the Turkish lira.

He also threatened legal action against anybody spreading misinformation that threatened the economy.  Prosecutors later said they would go after written and visual news as well as social media accounts who “threaten economic security” and spread “false news.”

The Turkish lira crisis is also hit emerging market currencies and the euro, as the impact of a Turkish financial crisis creates concerns over contagion.

The euro skidded to a one year low of $1.13. ANZ bank analysts attributed the euro’s wilt in part to “contagion risks” centered on Spanish, Italian and French banks which are exposed to Turkish foreign currency debt.

Spanish banks have $83.3 billion in exposure to Turkish markets, while French banks are owed $38.4 billion and Italian banks owed $17 billion.

The fear is that Turkish firms that took out euro and dollar denominated loans will be unable to repay those debts as the lira collapses, triggering bankruptcies that hit Turkish banks. The currency crisis would then turn into a financial crisis impacting European banks.

Erdogan vows to defy US 'threats' over detained pastor