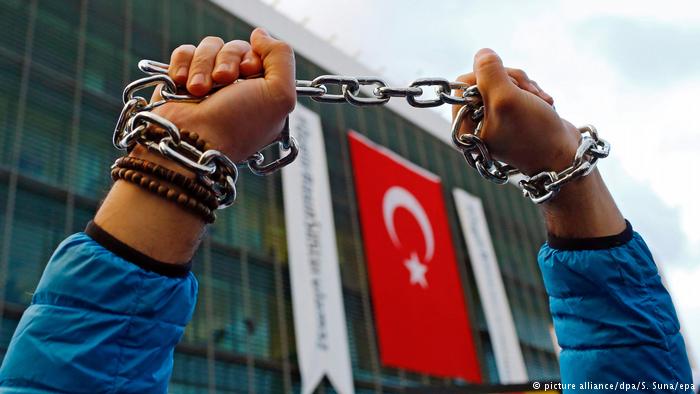 , one year after his ETHA news agency colleague, German journalist and translator Mesale Tolu, was herself detained and subsequently arrested.

Demirci lives in Germany and was on vacation in Turkey when he was taken into custody on the evening of April 13. That same night, the homes of two other ETHA employees, editor Semiha Sahin and reporter Pinar Gayip, were raided.

Demirci’s lawyer Gulhan Kaya said she did not know why her client was detained as there was an obligation of secrecy concerning the criminal proceedings. It is also not known exactly when Demirci, Sahin and Gayip, the three latest ETHA journalists to be detained in addition to the various ongoing trials against eight employees from the news agency, will appear before the court or whether or not they will be sent to prison.

‘Voice of the oppressed’

ETHA Editor-in-Chief Derya Okatan describes the news agency as an “independent” media outlet that aims to make “the voices of the oppressed heard,” including the LGBT community, women, youth and Kurds, as well as minorities like Armenians and members of the Alevi sect of Islam.

ETHA’s website, which has been blocked in Turkey for roughly two years by the country’s communications authority (BTK), features domestic and international news stories that focus on the “oppressed” groups. The news agency also publishes video statements from members of the banned Marxist-Leninist Communist Party (MLKP). In one of the videos, a young Turkish woman, who is referred to as an “MLKP warrior,” can be seen speaking in front of the group’s flag about the “indescribable feelings” she experienced when she arrived in Rojava, a self-declared autonomous Kurdish region in northern Syria. The video’s description states she died “during the liberation of Raqqa,” a former stronghold of the Islamic State militant group, while she was with MLKP forces.

Okatan has denied any connection between the ETHA and MLKP. “The reason for us to publish such news is that the Islamic State is an organization that has carried out brutal massacres and it has hurt many people around the world,” he said. “Of course we are going to report about the war against this.”

‘We are an opponent’

Okatan said the ETHA and its employees are being targeted by Turkey’s ruling Justice and Development Party (AKP) government and President Recep Tayyip Erdogan simply because “we are an opponent.”

He conceded that while modern Turkey has not enjoyed true press freedom since its foundation in 1923, the current AKP government has taken “the attacks on the press to new extremes.” Erdogan wants to form a “one-man regime,” Okatan said, and therefore needs to silence any opposing voices in the country.

According to the latest figures from the Turkish Journalists Union, 148 journalists are currently imprisoned in the country. The writers’ group PEN International reports that a total of 175 media outlets have been closed since Turkey’s state of emergency was declared after the failed coup attempt in the summer of 2016.

“This is not only about ETHA news agency,” said Okatan. “This is actually about the whole of the press that are opponents [of the government].”