Turkish President Recep Tayyip Erdogan on Sunday warned the Netherlands would pay for blocking his ministers from holding rallies to win support in a referendum on expanding his powers, as a crisis escalated with Turkey's key EU partners.

Erdogan also repeated hugely controversial accusations that the Netherlands — occupied by Nazi Germany in World War II — was behaving like fascists in its treatment of Turkish ministers.

Analysts are predicting a tight outcome to the April 16 referendum on a new constitution and Turkish ministers have planned major rallies in key EU cities to win votes from millions of Turks residing abroad.

But Turkey's Family Minister Fatma Betul Sayan Kaya was expelled after being prevented from addressing a rally in the Dutch port city of Rotterdam.

Also this weekend, The Hague refused to allow Foreign Minister Mevlut Cavusoglu's plane to land ahead of a planned rally.

"Hey Holland! If you are sacrificing Turkish-Dutch relations for the sake of the elections on Wednesday, you will pay a price," an angry Erdogan told a ceremony in Istanbul, referring to the March 15 election in Turkey's NATO ally.

"They will learn what diplomacy is," he growled, adding that what happened "cannot remain unanswered."

"If you let horses, dogs on my citizens you have to be held to account," he said, referring to dogs, horses and water cannons used by Dutch police to disperse pro-Erdogan demonstrators after clashes in Rotterdam early Sunday. 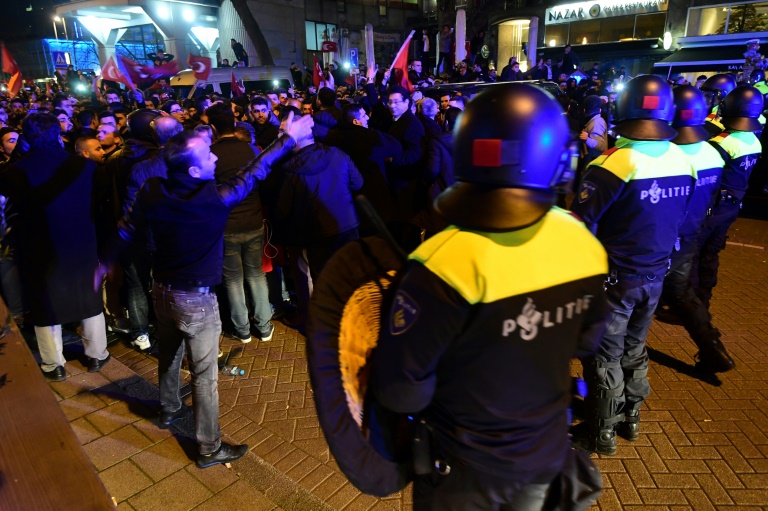 Police forcefully dispersed protestors after several hours of a calm, but tense demonstration by more than 1,000 people outside the Turkish consulate in Rotterdam (Emmanuel Dunand / AFP)

But Dutch Prime Prime Minister Mark Rutte ruled out apologizing, saying: "There's absolutely no way excuses can be made, they should make excuses for what they've done yesterday."

Erdogan repeated his accusations that the Dutch response to the Turkish visits was "Nazism, fascism".

Speaking at a rally in the French city of Metz — which was allowed to go ahead — Cavusoglu described the Netherlands as the "capital of fascism".

Faced with an upsurge in support for the far-right, European governments have come under pressure to take a hard line on Erdogan, who is accused by critics of seeking one-man rule in the constitutional changes.

Danish Prime Minister Lars Lokke on Sunday called on his Turkish counterpart Binali Yildirim to delay a planned March visit because of the "tensions".

Police clashed with pro-Erdogan demonstrators in the Netherlands overnight while in Istanbul on Sunday a man climbed onto the roof of the Dutch consulate and replaced the Dutch flag with a Turkish flag.

A Dutch foreign ministry spokeswoman told AFP that the Netherlands had "protested to the Turkish authorities" over the incident.

The latest row came after NATO allies Turkey and Germany sparred over the cancellation of a series of referendum campaign events there.

German Interior Minister Thomas de Maiziere said Sunday he was against Turkish ministers holding political rallies in Germany. "A Turkish campaign has no business being here in Germany," he told public broadcaster ARD.

Berlin has also emerged as a strident critic over Ankara's crackdown following an attempted coup, which has seen more than 100,000 people arrested or dismissed from their posts over alleged links to the plotters or to Kurdish militants. 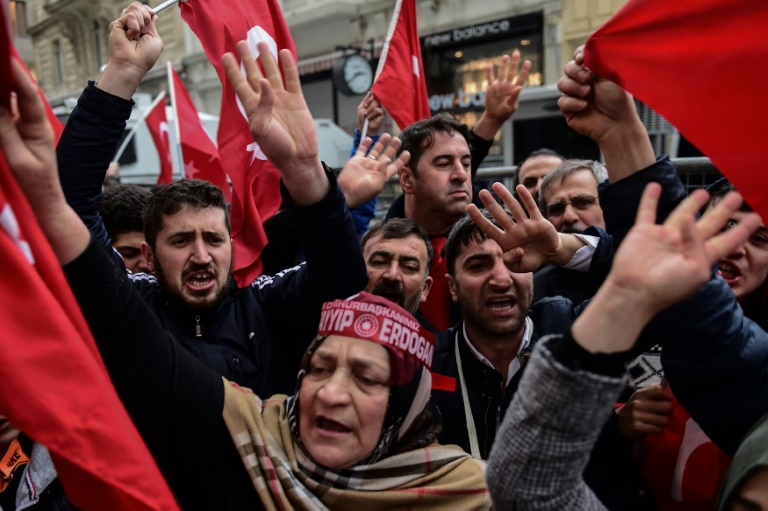 Protesters in front of the Dutch Consulate on March 12, 2017 in Istanbul (Yasin Akgul / AFP)

"The West has clearly shown its true face in the last couple of days," Erdogan said. "What we have seen is a clear manifestation of Islamophobia," he added.

The president indicated that he himself plans to travel to Europe for rallies, a move that could potentially create an even greater row.

In Metz, Cavusoglu was welcomed by some 800 flag-waving Turks. French Foreign Minister Jean-Marc Ayrault said in a statement there was "no reason to prohibit this gathering".

"I thank France. France was not deceived by such games," Erdogan said.

In a later speech outside Istanbul, Erdogan called on "all international organisations" to impose sanctions on the Netherlands, who he said was behaving "like a banana republic".

The diplomatic row triggered clashes in Rotterdam, where after several hours of calm demonstrations, police moved in to disperse over 1,000 people gathered near the Turkish consulate, charging the crowd on horseback and using dogs to regain control.

The Netherlands is home to some 400,000 people of Turkish origin while Germany has 1.4 million people eligible to vote in Turkey — the fourth-largest electoral base after the cities of Istanbul, Ankara and Izmir.

Turkey’s leader has unfinished business in Syria. What is he waiting for?