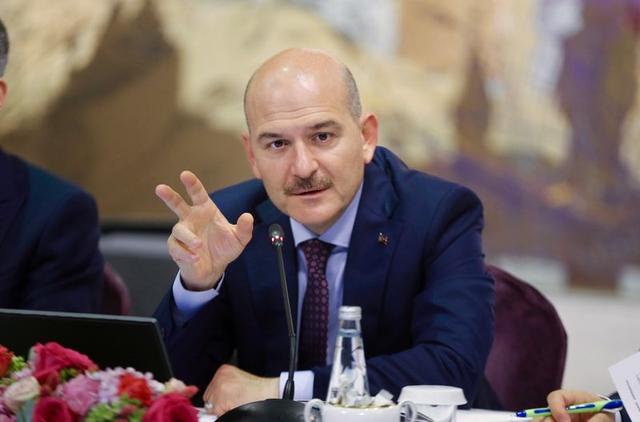 ANKARA (Reuters) – The political fallout from Turkey’s rushed coronavirus lockdown at the weekend has exposed tensions at the top of President Tayyip Erdogan’s AK Party after he rejected the resignation of his interior minister.

Suleyman Soylu submitted his resignation on Sunday after authorities gave just two hours’ notice for a 48-hour curfew in Turkey’s main cities, causing chaotic scenes as crowds of people rushed to the shops to stock up on supplies.

His resignation statement prompted a wave of support on social media for Soylu, who is known for his hawkish stance on security and is popular with party supporters, and Erdogan swiftly announced that the minister would stay in place.

As a prominent member of Erdogan’s cabinet, Soylu is seen by some party members as a potential rival to the president’s influential son-in-law, Finance Minister Berat Albayrak, and view the weekend events through that prism.

“It is no secret now that there has been a struggle and some issues between Albayrak and Soylu for some time,” one AK Party official told Reuters, speaking on condition of anonymity.

“Soylu’s […] resignation was an explosion from all this build-up.”

By offering to take individual blame — even though the lockdown was approved by Erdogan — and then winning a public endorsement from the president, Soylu has strengthened his own position, the official said.

The government has played down suggestions of division.

“Our president has rejected our interior minister’s resignation […] Nobody can axe our unity and solidarity,” presidential spokesman Ibrahim Kalin said on Monday.

Since being appointed interior minister four years ago, Soylu, 50, has led a crackdown in which tens of thousands of people have been detained on suspicion of links to a network accused of being behind a failed 2016 military coup.

The purge alarmed Turkey’s Western allies and rights groups who say it was indiscriminate and disproportionate. Ankara says it was a necessary response to security challenges it faced domestically and from across its borders with Syria and Iraq.

“Soylu’s relentless work and success in the battle against terrorism has been recognized by the people, the support base and the party,” the AK Party official said.

“No matter what anyone says, he has power and that power was really consolidated with the resignation issue.”

Losing Soylu would have dealt a blow to the AK Party, said a second party official.

The Islamist-rooted AK Party, which has ruled Turkey since 2002, has seen two of its founder members break away in the past year to establish rival parties, and any internal party dissent would pose an additional challenge to Erdogan.

Erdogan was re-elected president in 2018, under a new executive presidency which granted him sweeping powers, but his party suffered defeat last year in municipal elections in the country’s two largest cities, Istanbul and Ankara.

New presidential and parliamentary elections are not scheduled until 2023.