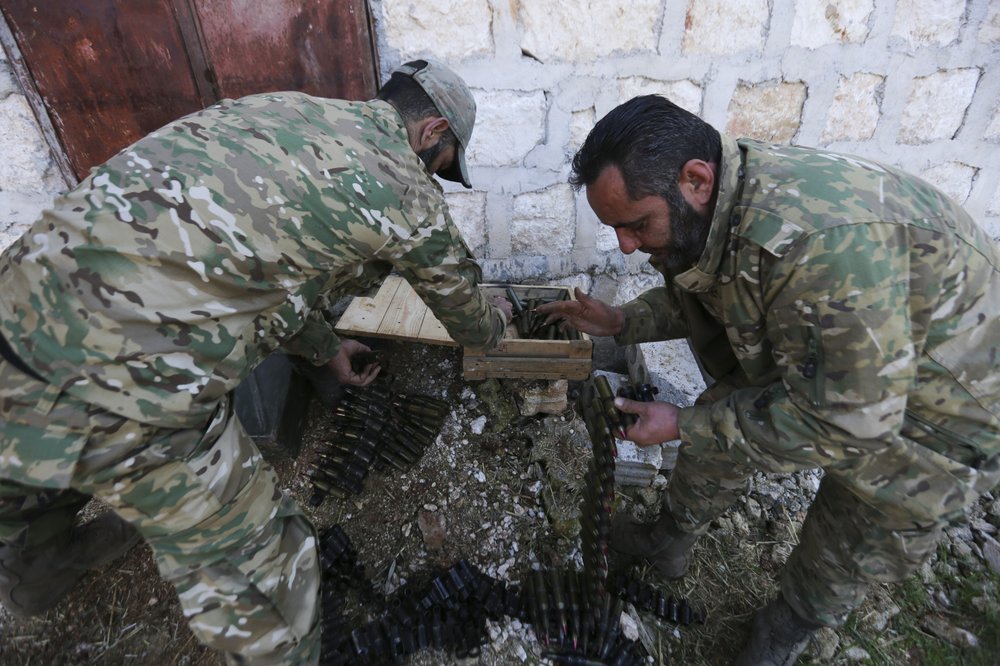 ANKARA, Turkey (AP) — Two Turkish soldiers were killed Thursday in an airstrike in northwestern Syria, Turkey said, after an attack by Ankara-backed opposition forces that targeted Syrian government troops. The deaths came after the Turkish president threatened to expand his nation’s involvement in Syria if another one of his troops were hurt.

At least 15 Turkish soldiers have been killed in Syria this month amid a crushing offensive by Syrian President Bashar Assad’s forces aimed at recapturing remaining opposition-held areas in the region.

Intent on halting the advance, Turkish President Recep Tayyip Erdogan had vowed Feb. 12 to take military action “everywhere in Syria” if another Turkish soldier was killed or wounded.

The multiple front offensive has triggered the biggest single wave of fleeing civilians in Syria’s nine-year war, displacing nearly 1 million people who have rushed toward the Turkish border and are sheltering in tents or sleeping rough in harsh winter weather.

It has also risked completely shattering a fragile cooperation between Ankara and Moscow, which back opposing sides of the Syria war. Ankara has sent thousands of soldiers to northwestern Syria to try to stem the Syrian government advance on the province near the Turkish border, leading to the repeated flare-ups.

Thursday’s exchange marked a serious escalation that risks growing into a full-blown conflict between Turkey and Syria. Erdogan has also called on Assad’s forces to retreat from Idlib or face an “imminent” Turkish attack.

The Russian military said the militants’ actions “were supported by Turkish artillery fire,” which allowed them to break through the Syrian army’s defenses. Four Syrian soldiers were wounded in the Turkish shelling, it said.

At the Syrian military’s request, Russian Su-24 bombers then struck the militants to prevent them from advancing and allowing Syrian government forces to “successfully repel all attacks,” the military added.

It was not immediately clear whether it was the Russian airstrikes that killed the two Turkish soldiers and injured five others.

Fahrettin Altun, a top aide to Erdogan, said the attack was carried out by Syrian government forces. On Twitter, he wrote: “The blood of our martyrs won’t be left unaccounted for.”

The Turkish Defense Ministry tweeted that as many as 50 Syrian government soldiers were killed and that five tanks, two armored personnel carriers and other equipment were destroyed.

In Moscow, Russian Foreign Ministry spokeswoman Maria Zakharova raised what she called “serious concern about the Turkish military support for the militants.”

“This incident represents a violation of the Russian-Turkish agreements on separation between the armed opposition and terrorists and the creation of a demilitarized zone. It risks provoking further escalation of the conflict in that part of Syria’s territory,” she said in a statement.

Turkey and Russia have closely coordinated their moves in recent years in Idlib province. Turkey maintains observation posts in northern Syria that were set up to monitor a 2018 cease-fire agreement with Russia. The truce collapsed in late 2019, leading to the current Syrian offensive, backed by Russia.

Russian officials have said they hold Turkey responsible for the collapse of the cease-fire deal, saying Ankara had not held up its end to rein in militants who continued attacking Syrian and Russian targets.

Ankara sent in thousands of additional troops and armored vehicles in recent weeks, vowing to halt the government’s advance.

“We are delivering our final warnings. We have not reached the desired results as yet,” Erdogan said Wednesday. “The operation in Idlib is a matter of time. We could enter (Idlib) suddenly one night.”

Akar said Turkey’s military has prepared “plans A, B and C” for a possible offensive in Idlib.

So far, talks between Turkish and Russian officials have failed to reach agreements that would ease tensions there.

“While both Russia and Turkey likely seek to maintain their cooperation across Syria more broadly, growing tensions in Idlib between the two countries threatens to derail that cooperation,” said expert Mona Yacoubian, in an analysis for the United States Institute for Peace.

Akar said Turkey had no intention to come “head to head with Russia,” insisting that Turkey’s aim was to ensure that the Syrian government abides by the cease-fire agreement for the province.

Asked how Washington can support Turkey in Idlib, he said the United States or other NATO countries could deploy Patriot missile defense systems on the Turkish border with Syria to guard against possible attacks from Syrian territory.

“In the past, they sent us air defense batteries. Our country faces a missile threat. … In this way, there could be a support (through the deployment) of Patriot batteries,” Akar said.

In Washington, a U.S. official said the United States was aware of Turkey’s request for Patriot missiles for use on the border with Syria. But no decision have been made, said the official, who agreed to comment on the matter only on condition of anonymity.

In the call, Putin “underlined the need to take efficient measures to neutralize the terrorist threat while respecting sovereignty and territorial integrity of Syria,” it said, adding that the leaders of France and Germany offered to help reduce tensions.

The French offered a slightly different version of the conversation, saying in a statement after the call that Merkel and Macron “warned President Putin about the humanitarian situation for the civilian population in Idlib,” and called for an immediate stop to hostilities and an end to the blocking of humanitarian aid. Macron and Merkel said they were available to meet quickly with Putin and Erdogan to find a political solution.

The region is seeing 900,000 people on the run in Idlib during a bitterly cold winter with nowhere to go. Aid organizations said they were overwhelmed and facing severe shortages.

“We are burning through our supplies much faster than anticipated. We just do not know how long this will continue, how many more people will need help and for how long, a level of emergency that is impossible to comprehend,” said Mercy Corps country director Kieren Barnes.

“A total of 1,227 trucks of humanitarian assistance crossed from Turkey through Bab al-Hawa and Bab al-Salam cross-border checks last month compared to 928 trucks in December,” Dujarric said. “This is the largest amount of aid the United Nations has sent across the Syrian-Turkish border in (any month) since the operation was authorized in 2014.”

In the attack on the village of Nairab, the Anadolu agency said the opposition moved in after Syrian government targets there were hit by artillery fire. They destroyed a tank and an APC belonging to Syrian forces and seized a second tank, according to the report.

Syrian opposition activists confirmed the report, saying Turkey-backed insurgents stormed the village near the strategic town of Saraqeb, both of which were held by Syrian troops.

The Britain-based Syrian Observatory for Human Rights, a Syria war monitor, said the clashes and bombardment in and near Nairab left two Turkish soldiers dead as well as killing 14 insurgents and 11 pro-government fighters. It said the opposition facts withdrew from the village by evening.

Syrian state TV reported that government forces have repelled the attacks on Nairab.

Turkish Foreign Minister Mevlut Cavusoglu said Russian and Turkish delegations would hold more talks on reducing tensions in Idlib province and that the Turkish and Russian leaders could meet too, if needed.

“It is true that at the moment, there are differences in the (two sides’) positions,” Cavusoglu told state broadcaster TRT. The delegations narrowed their differences a bit but “are not yet at the point we want” to be, he said.