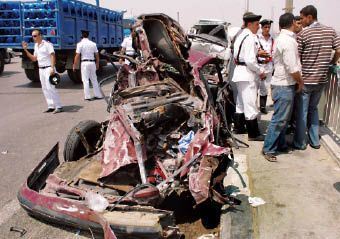 12 people were killed and two injured in a car accident on the Sohag international airport road on Sunday morning.

Post-crash investigations indicated that the accident happened when a microbus and a car collided at a turning point in the middle of the high speed road just before the airport, killing 12 and injury another two.

Egypt has one of the world’s highest traffic-accident mortality rates.
In December, the Central Agency for Public Mobilization and Statistics (CAPMAS) said the number of car accidents during the first half of 2015 rose by 3.5 percent to a total of 6,916 accidents, compared with 6,685 accidents during the same period in 2014.
The number of deaths, however, decreased by 2.7 percent, from 3,025 to 2,808 deaths in the first half of 2015.