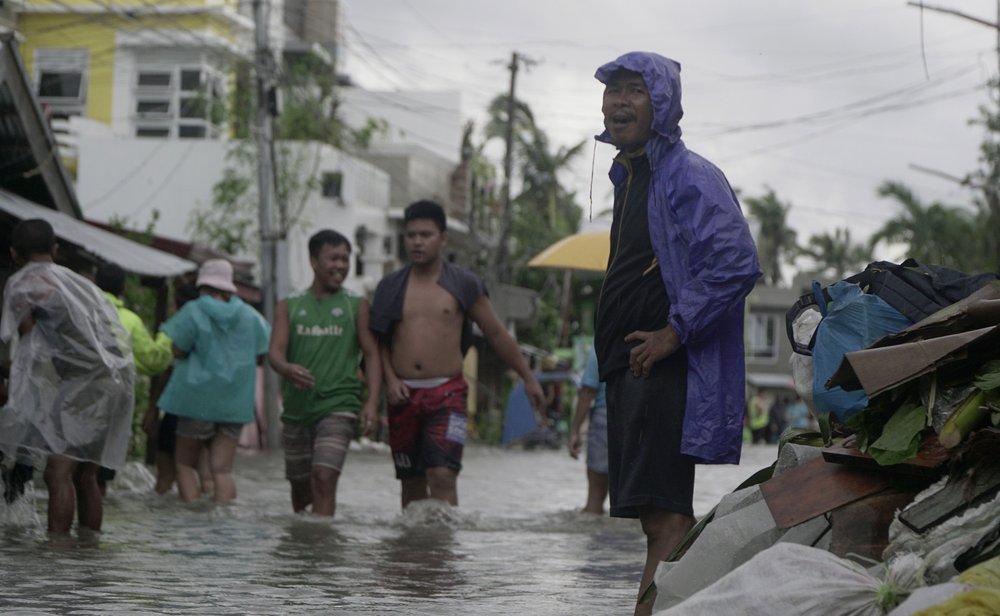 MANILA, Philippines (AP) — Strong winds and rain from Typhoon Vongfong left at least one person dead and damaged hundreds of homes and coronavirus isolation facilities along with rice and corn fields in five hard-hit eastern towns, a governor said Friday.

Gov. Ben Evardone of Eastern Samar province, where the typhoon slammed ashore, said distraught residents wept after their houses were destroyed or blown away in the towns he inspected. One villager who lost his home slashed his wrist but was treated in time, he said.

A man bled to death after he was hit by glass shards in a school building he was trying to open to take shelter in, Evardone said.

“The damage I saw was very extensive. The roof of one church was ripped off completely, its iron bars twisted badly by the typhoon,” Evardone said by telephone.

Videos and pictures of the devastation sent by Evardone showed several low-slung buildings and sports centers either destroyed or badly damaged with their roofs peeled off or deformed and their iron trusses bent. Villagers outside damaged houses yelled “help” in one video.

He said he and a group of military, police and local authorities failed to reach two towns hit by the typhoon, Jipapad and Maslog, due to fallen trees on the road. Cellphone and two-way radio communications to the far-flung areas were down and Evardone appealed to the military to deploy a helicopter to inspect them and deliver food if troops are unable to reach the area by Saturday.

In the outlying region of Bicol, northwest of Eastern Samar, more than 145,000 people were riding out the weakening typhoon in emergency shelters on Friday after a mass evacuation that was complicated and slowed by the coronavirus.

Vongfong weakened into a severe tropical storm after hitting land and was blowing northwest toward the populous main northern island of Luzon, government forecasters said.

Its maximum sustained wind speed dropped to 110 kilometers (68 miles) per hour with gusts of 150 kph (93 mph) but it remained dangerous, especially in coastal and low-lying villages, forecasters said. Vongfong was expected to blow out of the country’s north on Sunday.

Office of Civil Defense Director Claudio Yucot said the evacuations took time because workers needed to wear masks and protective suits and could not transport villagers to shelters in large numbers as a safeguard against the virus.

“Our ease of movement has been limited by COVID,” Yucot said by telephone from Albay province in the Bicol region, which has had dozens of coronavirus infections, including four deaths, and remains under quarantine. “In the evacuation centers, there are more challenges.”

In an evacuation room which normally could shelter up to 40 families, only four families could be accommodated. The occupants should know each other and are required to report any infected person, Yucot said.

The coast guard said more than 600 cargo truck drivers and workers were stranded by the travel suspension. All were required to wear masks and prohibited from mingling.

The typhoon hit as the Philippines struggles to deal with coronavirus outbreaks, largely with a lockdown in Luzon that is to be eased this weekend, except in metropolitan Manila and two other high-risk areas. The rest of the country will be placed in less restrictive quarantine, and crucial businesses will partially reopen starting next week.

The Philippines has reported more than 12,000 cases, including 806 deaths, among the highest in Southeast Asia.

Image: Residents wade along a flooded village caused by typhoon Vongfong as it passed by Sorsogon province, eastern Philippines on Friday May 15, 2020. More than 150,000 people were riding out a weakening typhoon in emergency shelters in the Philippines on Friday after a mass evacuation that was complicated and slowed by the coronavirus. (AP Photo/Melchor Hilotin)

Despite danger, Filipinos made restive volcano their home