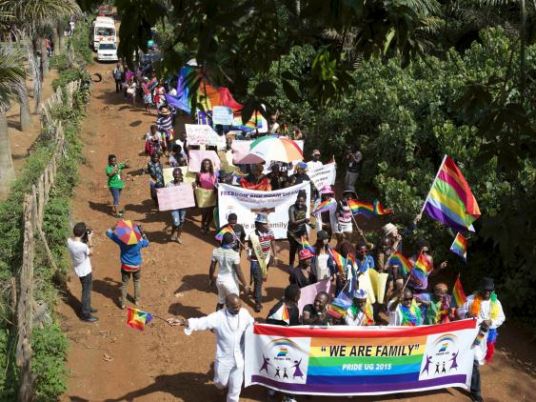 Several dozen Ugandans marked Gay Pride on Saturday, cheering that such a parade could go ahead in a country that only last year tried to impose long jail terms for gay sex.
At a secluded beach in Entebbe, on Lake Victoria just outside the capital Kampala, a group of about 70 people holding banners including "I have a relationship with Jesus and I'm gay", marched a short distance as music blared out.
Gays and lesbians in Ugandans often live secretive lives, fearful that coming out will attract stigma and hostility from family and friends, or the loss of a job or an apartment.
"We are here to send a message to the wider population that we do exist and we want rights like any other Ugandan," said Moses Kimbugwe, one of the marchers. "We think this is a step moving forward."
Although some of the revellers described the march – the culmination of a week of gay rights events in Uganda – as a triumph, they said their joy was tempered by the fact that society was still largely hostile to them and that attitudes were unlikely to change quickly.
"Why do I have to celebrate it in an isolated place? Who am I showing that I am proud, because we are celebrating to our own selves," activist Sandra Ntebi said.
In 2014, Uganda attracted a storm of international condemnation after enacting one of the harshest anti-gay laws in Africa, where homosexuality is illegal in 37 countries.
A constitutional court later overturned the law because of legal technicalities. Despite threats by some lawmakers that the bill would be re-introduced in parliament, that has not happened and analysts say it would be unlikely to succeed in the face of strong pressure from Western donors.
Another marcher, who identified herself only by her first name, Mariam, because she was unwilling to be identified publicly as gay, said it was "exciting" to march alongside other gay people, but added she lived in fear of being found out. "I would never ever reveal my gay lifestyle to my parents or friends. They would denounce me," she said.