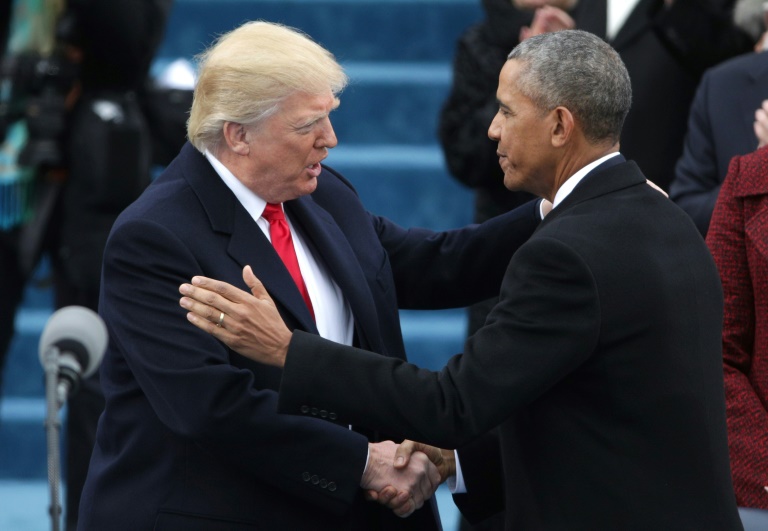 Britain’s ambassador to Washington believed US President Donald Trump pulled out of the Iran nuclear deal because it was associated with his predecessor Barack Obama, according to leaked documents published Saturday.

“The administration is set upon an act of diplomatic vandalism, seemingly for ideological and personality reasons — it was Obama’s deal,” ambassador Kim Darroch wrote in a diplomatic cable in May 2018.

The cable was included in a second batch of leaked reports published by the Mail on Sunday newspaper, the first of which caused Darroch to resign earlier this week.

Separately, the Sunday Times reported that a government investigation into the leak had identified a civil servant as the person responsible.

Working with officials from the National Cyber Security Centre, part of spy agency GCHQ, and MI6, the probe has homed in on a suspect who had access to historical Foreign Office files, the paper said.

The first leaked reports authored by Darroch were published last weekend, causing major turmoil between Britain and its closest ally.

Darroch resigned on Wednesday, saying it was now “impossible” to do his job.

In May 2018, Britain’s then-foreign minister Boris Johnson went to Washington to try to persuade Trump not to abandon the Iran deal.

In a cable sent afterwards, Darroch reportedly indicated there were divisions in Trump’s team over the decision, and criticised the White House for a lack of long-term strategy.

“They can’t articulate any ‘day-after’ strategy; and contacts with State Department this morning suggest no sort of plan for reaching out to partners and allies, whether in Europe or the region,” he wrote.

He reported back that Secretary of State Mike Pompeo, during his talks with Johnson, “did some subtle distancing by talking throughout about ‘the President’s decision'”.

The newspaper reported that, according to Darroch, Pompeo also hinted that he had tried but failed to “sell” a revised text to Trump.

In 2015, the United States, China, Britain, France, Russia and Germany signed a deal with Iran to limit its nuclear programme in exchange for a partial lifting of international economic sanctions.

Trump had long been critical of the deal and withdrew the United States on May 8, 2018.

As well as a government investigation into the leaks, police are also looking into a potential breach of the Official Secrets Act.

London’s Metropolitan Police sparked widespread condemnation on Saturday after a warning to journalists that publishing leaked documents could be a criminal matter.

Johnson, who is now in the race to succeed May as prime minister, said that prosecuting media outlets would have a “chilling effect on public debate”.

Image: GETTY IMAGES NORTH AMERICA/AFP/File / ALEX WONG Trump was hostile to the accord with Iran because it was “Obama’s deal” according to the leaked diplomatic cable

The Latest: Iran says US sanctions are ‘warfare’