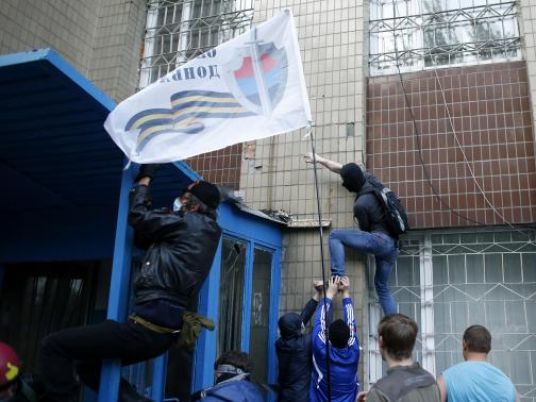 Ukrainian security officials said on Sunday they were in full control of the former rebel stronghold of Slaviansk after re-taking it in a victory which President Petro Poroshenko said could mark a turning point in the fight against the separatists.
Government forces routed pro-Russian rebels in the flashpoint city in eastern Ukraine on Saturday and raised the blue and yellow national flag again over what had for months been the separatist redoubt of Slaviansk.
There were no immediate casualty figures available, though Ukrainian security officials said there had been no deaths on the side of government forces.
"Ukrainian forces fully control the towns of Slaviansk and Kramatorsk," Andriy Lysenko, an official of the "anti-terrorist operation", told journalists, adding that the government had begun to rebuild the town's shattered infrastructure and ensure food and drinking water for residents.
Slaviansk has been the strongest redoubt of militants fighting government forces in mainly Russian-speaking eastern Ukraine in what has been a source of great tensions between the West and Russia.
Its re-capture represents Kiev's most notable military victory in three months of fighting in which more than 200 Ukrainian troops have been killed as well as hundreds of civilians and rebels.
Speaking in a televised address on Saturday night, Poroshenko hailed the victory as a significant symbolic moment.
"This is not full victory. But the clearing out of people armed to the teeth from Slaviansk has huge symbolic importance. It is the beginning of the turning point in the battle with fighters for the territorial integrity of Ukraine," he said.
He said hostages held there by the separatists had been released and a significant amount of weapons had been seized.
But he warned that the rebels were re-grouping in other big towns and he said he himself was far from euphoric.
"There are further tests ahead," he said.
Lysenko, of the "anti-terrorist operation", said: "The bands of terrorists are demoralized but they are all the same carrying out treacherous attacks on Ukrainian forces."
But he said also that in Slaviansk and neighboring areas scores of rebels were surrendering. "Those who are giving themselves up are providing information about units of (rebel) fighters and where weapons are," Lysenko said.
Many of the hundreds of armed rebels who fled Slaviansk and Kramatorsk, 20 km (12 miles) to the south, went to Donetsk, the main industrial hub in the region where separatists first declared a "people's republic" and declared their wish to join Russia.
MOSCOW DENIAL
Moscow, which has already come under economic sanctions from the West, denies Western and Kiev's accusations it has been backing the insurrection possibly with a view to dismembering the former Soviet republic.
Uprisings in eastern Ukraine erupted in April as rebels took over state buildings, built a powerful arsenal of seized weapons and declared their independence from Kiev, calling the pro-European government illegitimate.
The crisis began when street protests ousted Moscow-backed Viktor Yanukovich in late February for rejecting a landmark political and trade deal with the European Union in favor of closer ties with Russia.
Russia subsequently annexed Crimea and separatist revolts against the new Kiev authorities broke out with rebels declaring "people's republics" and saying they wanted to join Russia.
Talks in Berlin last week involving the foreign ministers of Ukraine, Russia, Germany and France had set Saturday as the day for talks between a contact group representing Ukraine, Russia and the OSCE security watchdog, and separatist leaders.
The talks were to have been aimed at working out an effective ceasefire observed by the opposing sides. Poroshenko declared a week-long unilateral ceasefire on June 20 which he renewed for a further three days.
But he refused last Monday to extend it any further, citing numerous violations by the rebels, and sent government forces onto an offensive against the rebels.
Russia has denied allegations by Kiev that it has been fanning the separatist rebellions by allowing weapons and fighters to cross over the long joint border to support the separatists. It has been pressing Poroshenko to engage in talks with the separatists and agree on a ceasefire.