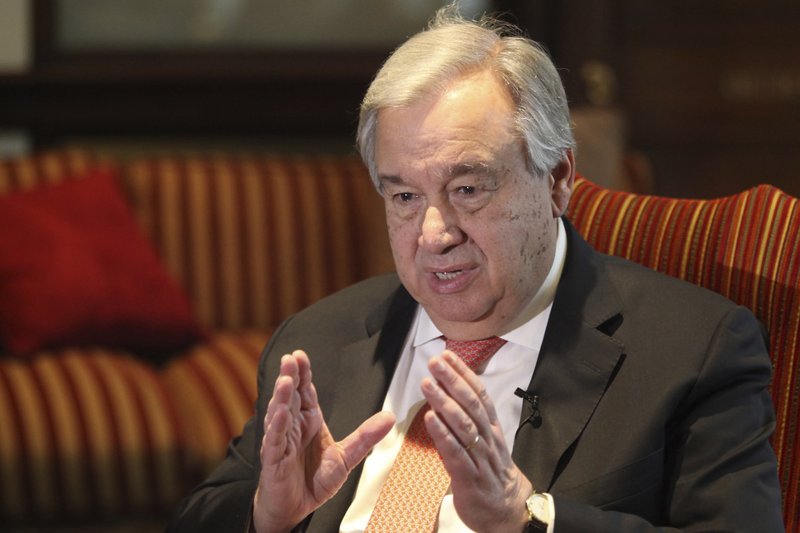 UNITED NATIONS (AP) — UN Secretary-General Antonio Guterres warned that foreign interference in Libya’s war has reached “unprecedented levels” and urged key players and their backers to unblock the political stalemate and agree to a cease-fire and peace talks.

Calling the current situation “gloomy,” the UN chief said Wednesday that the United Nations political mission in Libya is undertaking de-escalation efforts, “including the creation of a possible demilitarized zone,” to try to reach a negotiated solution and spare lives. He said between April 1 and June 30 there were at least 102 civilian deaths and 254 civilians wounded in Libya, “a 172 percent increase compared to the first quarter of 2020.”

Guterres addressed a high-level meeting of the UN Security Council six months after leaders of 11 world powers and other countries with interests in Libya’s long-running civil war agreed at a conference in Berlin to respect a much-violated UN arms embargo, hold off on military support to the warring parties, and push them to reach a full cease-fire.

Guterres and speaker after speaker decried the failure of the parties to adhere to the Berlin agreement and demand its speedy implementation.

“We all took strong commitments in the Berlin conference in January and it’s now time to translate our words into concrete actions,” European Union foreign policy chief Josep Borrell told the virtual meeting. “The polarization that has turned Libya into a theater for proxy-war needs to stop. Action in support of one or the other Libyan parties needs to stop.”

Libya has been in turmoil since 2011, when a civil war toppled long-time dictator Moammar Gadhafi, who was later killed. The country has since split between rival administrations in the east and the west, each backed by armed groups and foreign governments.

Eastern forces under Khalifa Hafter launched an offensive trying to take Tripoli in April 2019, and the crisis in the oil-rich country has steadily worsened as foreign backers increasingly intervened despite pledges at the Berlin conference.

Hafter’s offensive is supported by France, Russia, Jordan, the United Arab Emirates and other key Arab countries. The government in Tripoli is backed by Turkey — which sent troops and mercenaries to protect the capital in January — as well as Italy and Qatar.

Tripoli-based forces with Turkish support gained the upper hand in the war in early June after retaking the capital’s airport, all main entrance and exit points to the city and a string of key towns near Tripoli. They threatened to retake the strategic city of Sirte, which could allow them to gain control of oil fields and facilities in the south that Hafter seized earlier this year as part of his offensive on Tripoli.

Egypt warned that it would intervene militarily if Turkish-backed forces attacked Sirte and the inland Jufra air base.

Guterres told the Security Council that forces supporting the government are now 25 kilometers (15 miles) west of Sirte, after two previous attempts to gain control of the city.

“The situation on the front lines has been mostly quiet since June 10,” he said. “However, we are very concerned about the alarming military buildup around the city, and the high level of direct foreign interference in the conflict in violation of the UN arms embargo, UN Security Council resolutions, and the commitments made by member states in Berlin.”

Turkey’s Deputy Foreign Minister Sedat Onal stressed that it was in Libya to support the legitimate government at its request and supported the Berlin agreement for providing “the architecture for intra-Libyan talks.”

Referring to Hafter’s offensive, Onal said: “Placing the aggressor on equal footing with the legitimate UN-recognized government is wrong and counterproductive. This grave mistake must be corrected.” And he said blaming Turkey for what’s happening in Libya “amounts to hypocrisy.”

Germany’s Foreign Minister Heiko Maas, whose country currently holds the council presidency and chaired the meeting, expressed dismay that while other countries were trying to save lives in the COVID-19 pandemic in recent months, hospitals in Libya were being bombed and “ships, planes and trucks with weapons and mercenaries kept arriving in Libyan cities.”

He said foreign interference, “the main driver of the conflict in Libya,” must be brought to an end, and there must be “no more lies” and “backdoor deals” where foreign parties carve out spheres of influence.

“We will use the measures at our disposal, including targeted sanctions, to make sure that Libya is no longer the battleground in a foreign war,” Maas warned.

He urged all parties to unite behind UN-led peace efforts and behind a first important step which could be “a demilitarized solution for Sirte and Jufra.”

Image: FILE – In this Feb. 18, 2020, file photo, UN Secretary-General Antonio Guterres speaks during an interview with The Associated Press in Lahore, Pakistan. Guterres expressed hope Tuesday, June 23, 2020 that Israel will hear global calls and will not go ahead with annexation of parts of the West Bank, which would undermine a two-state solution to the decades-old Israeli-Palestinian conflict. (AP Photo/K.M. Chaudhry, File)

Turkish invasion of Libya is escalating through the use of dangerous arms: Haftar