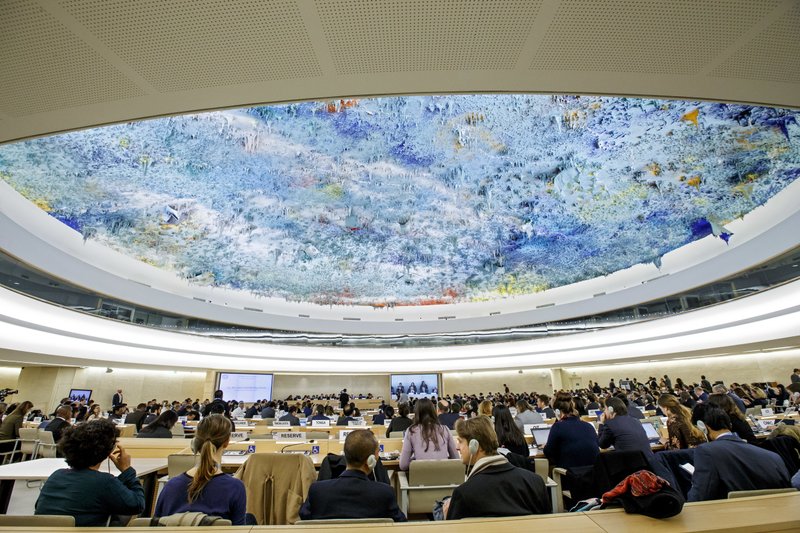 Myanmar’s Rohingya minority has “very likely” faced crimes against humanity and possibly genocide at the hands of Myanmar security forces and their helpers, the UN’s top human rights body and a top UN official said Tuesday.

The comments came at an urgent session of the 47-member Human Rights Council, which overwhelmingly approved a resolution that said crimes against humanity “very likely” occurred in Myanmar against the Muslim minority group since a security crackdown began in August.

The crisis has left untold numbers of Rohingya killed and injured, and forced more than 626,000 to flee into neighboring Bangladesh.

Marzuki Darusman, who heads a council-mandated fact-finding mission on Myanmar that has received no access to the troubled state of Rakhine where many Rohingya once lived, chronicled a litany of allegations including the rape of young girls — some burnt to death or with their throats slit — and the mutilation of victims.

“The allegations are numerous and many of extreme severity,” Darusman said. “Some have concluded that genocide or crimes against humanity have taken place. We have not yet come to any conclusion on these issues, but we are taking such allegations very seriously and are examining them in depth.”

But the UN human rights chief, Zeid Ra’ad al-Hussein, challenged the council, insisting that the possibility of genocide was real.

Zeid, a Jordanian prince, cited the longtime segregation, exclusion and discrimination faced by the Rohingya. He referred to allegations of killings by grenades, shootings at close range, stabbings and “the burning of houses with families inside.” He noted that Rohingya see themselves as a distinct ethnic group.

“Given all of this, can anyone rule out that elements of genocide may be present?” Zeid asked. “Ultimately, this is a legal determination only a competent court can make.”

“But the concerns are extremely serious, and clearly call for access to be immediately granted for further verification,” he added, decrying how Myanmar’s government has rebuffed UN monitors.

Myanmar’s army began what it called “clearance operations” on Aug. 25 following an attack on police posts by Rohingya insurgents. Refugees arriving in Bangladesh said their homes were set on fire by soldiers and Buddhist mobs, and some reported being shot at by security forces.

Zeid said actions by Myanmar’s government to “dehumanize” the Rohingya minority were likely to fan more violence and affect more communities across the region.

Myanmar’s ambassador in Geneva, Htin Lynn, denied any state efforts at “dehumanization” of the Rohingya, saying it “could be an act of extremist individuals.”

“My government is doing everything possible to deter these extremist acts,” he said.

With his government in the spotlight, the ambassador said the priority should be on returning displaced people to Rakhine.

Zeid, however, said no repatriation of Rohingya to Myanmar should occur without “sustained human rights monitoring” to ensure they can live safely.

He said Myanmar authorities had refused to give his office access to Rakhine, and that he had instead sent three teams to Bangladesh to monitor the situation and interview refugees.

The council’s resolution broke little new ground other than calling for Zeid’s office to report on Myanmar’s cooperation with UN rights investigators.

It passed 33 to 3 — China, the Philippines and Burundi voted against it — with nine abstentions. Two delegations in the 47-member council were not present.

Iniyan Ilango of the group Forum Asia said the session, which was sought by Saudi Arabia and Bangladesh with the support of dozens of other countries, showed the widespread concern about the Rohingya.

“While this is welcome, there is more the body could have done,” he said of the resolution, such as demanding safeguards for Rohingya who might return home under a repatriation deal between Bangladesh and Myanmar.

Ilango said the human rights council “failed to respond adequately” to the unfolding crisis at its September session, and said it could do more “in the face of one of the worst human rights tragedies of our times.”

US: Myanmar violence is 'ethnic cleansing'