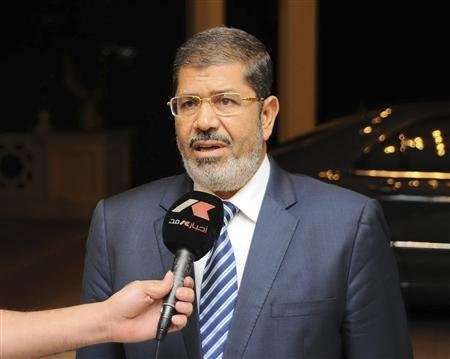 President Mohamed Morsy’s office issued a statement late Monday night regarding Morsy’s meeting with members of the Supreme Judicial Council, presided over by Mohamed Momtaz Metwaly at the Ettehadiya Presidential Palace in Heliopolis.

In the statement, Morsy expressed his concern to protect the Constitution and the rule of law. Preserving the independence of the judiciary is the president’s constitutional duty, and he would not accept any assault on the nation’s judges, the statement said.

In regards to the bill on judicial authority currently under review by the Shura Council, Morsy said he had confidence in every official who was performing his duty for the country, and added that he was keen to preserve the separation of the different branches of government.

In the meeting with the SJC, Morsy agreed to suspend the controversial Judicial Authority Law and keep Justice Minister Ahmed Mekky in place in order to diffuse tensions with the judiciary, senior sources in the justice system said on Monday.

The Judges Club said that Tuesday’s general assembly would determine if the crisis would escalate to the international level, should the Shura Council discuss the bill or consider reducing the retirement age for judges.

The Privy Council — the State Council’s highest administrative authority — called for an emergency general assembly on Wednesday to discuss what it called an “onslaught” against the judiciary.

The Wall Street Journal quoted leading Muslim Brotherhood figure Ibrahim Farag as saying that the judiciary would be purged, whether judges like it or not.

Morsy called for the crisis talks with the country's top judges after Mekky resigned over demands by the ruling Muslim Brotherhood for a "purification" of the judiciary.

The secular, liberal and left-wing opposition denounced what it called a planned "Brotherhoodization" of the judiciary and called for demonstrations outside Parliament.

A presidential source said Morsy met the Supreme Judicial Council and the prosecutor general to discuss a draft law reforming the judiciary due to go through the Islamist-dominated upper house on Wednesday.

A key provision of the draft proposed by the Brotherhood's Freedom and Justice Party would lower the mandatory retirement age for judges to 60 from 70, forcing hundreds of members of the judiciary to step down immediately.

Critics say it would eliminate more than 3,000 judges at a stroke, including most members of senior bodies such as the Constitutional Court which has repeatedly stymied Morsy’s legislative and election plans.

Leaders of the opposition National Salvation Front called for demonstrations outside the Shura Council on Wednesday to protest against what one senior liberal politician, Mohamed ElBaradei, called "the judges' massacre.”

"The true goal of this project is to 'Brotherhoodize' the judiciary and replace independent judges with Brotherhood elements," the umbrella group said in a statement.

Supporters of the bill, angered by the acquittal or release of some former Mubarak-era officials charged with corruption or abuses of power, deny that such a large number would be forced out but acknowledged it would remove at least 300 top judges seen as remnants of the former regime.

Morsyand the judiciary council also discussed the status of Prosecutor General Talaat Abdallah, accused by the opposition of Islamist bias, who is under pressure to quit after an appeals court ruled that his appointment by Morsy last year was illegal.

The presidential source declined to give details until decisions were taken. Asked whether Abdallah would be offered an alternative position, the source said: "Could be but not sure."

The courts have repeatedly intervened to change the course of events since the 2011 uprising that toppled Mubarak. The Constitutional Court invalidated the law under which the first post-revolution Parliament was elected, forcing its dissolution.

It also rejected the first attempt to replace that law, forcing Morsy to cancel plans for parliamentary elections due to have started this month.

An appeals court in January upheld appeals by Mubarak and his former interior minister against life sentences on charges of complicity in the killing of hundreds of demonstrators in the uprising that toppled him.

Two other courts have ordered Mubarak released because he has served the maximum permitted time in pre-trial custody, but he remains in jail on other charges.

An outspoken supporter of judicial independence during Mubarak's era, Mekky also opposed aspects of the draft law that he said would give the government too much control over the make-up of the judiciary.

Outspoken Morsy opponent and chairman of the Judges Club Ahmed al-Zend condemned the Brotherhood’s attempt to pass the bill at a news conference on Monday.

“The Brotherhood wants to get rid of the senior judges because they [the judges] are against the ‘Brotherhoodization’ of the judiciary … But the  young judges will furiously resist it,” Zend warned.

“We will not allow the Shura Council to massacre us,” he added.

“We will sue before the International Criminal Court all those who called for the demonstration that was titled ‘Purging the Judiciary’,” he said. “This is a crime against humanity.”