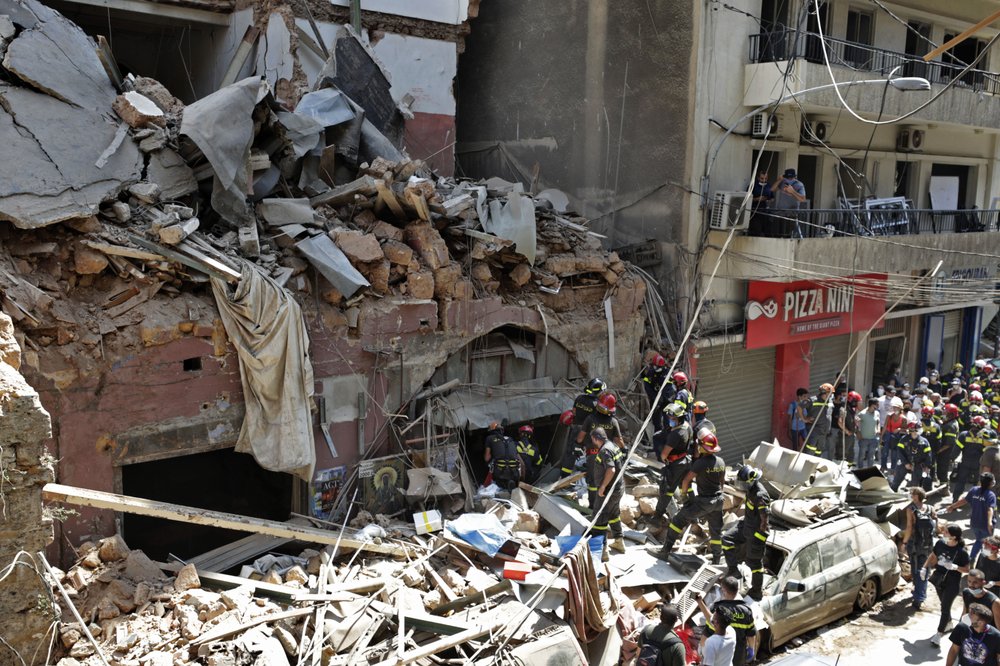 WASHINGTON (AP) — The United States on Thursday began delivering aid to Lebanon in the aftermath of a massive deadly explosion, amid longstanding concerns about how officials can ensure that supplies get to those in need, and not to the Iranian-backed Hezbollah.

The first C-17 transport aircraft with 11 pallets of food, water and medical supplies from the US military’s Central Command arrived from Qatar and two more were expected in the next 24 hours.

US officials said the administration also plans to provide at least US$15 million in disaster assistance. The officials were not authorized to discuss the matter ahead of a formal announcement and spoke on condition of anonymity. But the provision of assistance is complicated by the outsized role that Hezbollah plays in both the Lebanese government and in the fabric of Lebanon’s society.

A stockpile of 2,750 tons of ammonium nitrate set off a massive blast that rocked the capital city. The chemical had been left sitting in a warehouse ever since it was confiscated from an impounded cargo ship in 2013.

The explosion, powerful enough to be felt in Cyprus across the Eastern Mediterranean, killed more than 130 people, wounded thousands and blasted buildings for miles around. Two days later, some 300,000 people — more than 12 percent of Beirut’s population — can’t return to their homes, officials estimate. Damaged hospitals are still struggling to deal with the wounded and officials have estimated losses at $10 billion to $15 billion.

Hezbollah is recognized as a legitimate political party in Lebanon but deemed a terrorist organization by the State Department because of its anti-Israel stance and attacks on the Jewish state. As such, it is subject to significant American sanctions and since it has been part of the Lebanese government, successive US administrations have wrestled with how to continue to provide aid to the country that does not benefit the group.

Although pro-Israel lawmakers and anti-Iran hawks have long demanded that the US halt all assistance to the Lebanese Armed Forces, the Trump administration and its predecessors have resisted such a cut-off, arguing that the army is the only legitimate entity in Lebanon capable of countering Hezbollah’s influence and ensuring security.

Currently, non-military US aid to Lebanon is funneled in such a way as to avoid or reduce the chances of it making its way to any part of Hezbollah, a task which has become more difficult and is particularly sensitive in the current circumstance of providing disaster assistance since the group took control of the Health Ministry earlier this year.

“We’re well aware of some of the concerns with whom the aid would go to and ensuring that the aid gets to the people of Lebanon that need it most,” said Jonathan Hoffman, chief spokesman for the Pentagon, during a press conference Thursday. He said the department is working with the State Department and taking its guidance on where to deliver the aid.

Gen. Frank McKenzie, the top US commander for the Middle East and head of Central Command, said in a statement that, “We are closely coordinating with the Lebanon Armed Forces, and expect that we will continue to provide additional assistance throughout Lebanon’s recovery effort.”

Navy Capt. Bill Urban, spokesman for US Central Command, said the Lebanese Armed Forces will receive the aid and distribute it to the people, and that the effort is being coordinated with the US embassy in Beirut and USAID.

Image: French and Lebanese firemen search in the rubble of a building after the Tuesday explosion at the seaport of Beirut, in Beirut, Lebanon, Thursday, Aug. 6, 2020. Lebanese officials targeted in the investigation of the massive blast that tore through Beirut sought to shift blame for the presence of explosives at the city’s port, and the visiting French president warned that without serious reforms the country would “continue to sink.” (AP Photo/Hassan Ammar)