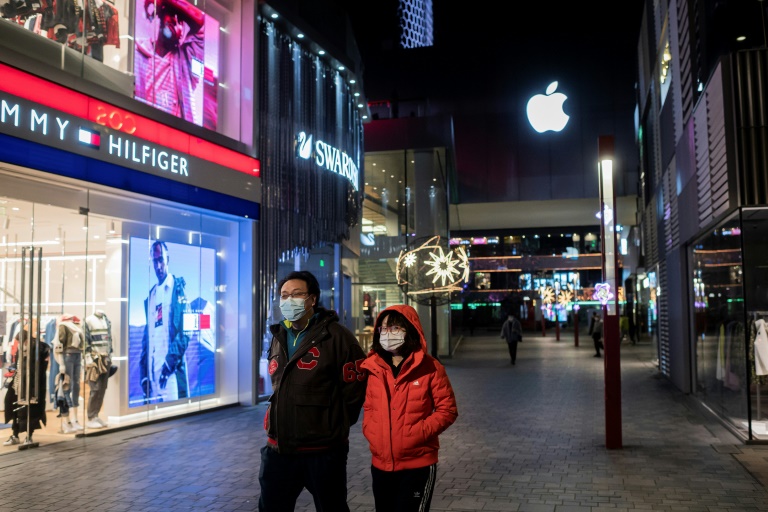 A hard-won trade war truce between the US and China is at risk as the coronavirus pandemic rocks the global economy, making it tough for Beijing to fulfil its commitments.

The United States also faces huge disruptions from the deadly virus while a diplomatic spat between Beijing and Washington threatens to derail the phase-one deal that came after more than a year of escalating tensions between the world’s two biggest economies.

In the pact signed in January, China agreed to buy $200 billion more in US goods over two years than it did in 2017 — before the trade war erupted and triggered tariffs on billions of dollars of two-way trade.

But concerns are mounting that the conditions of the deal cannot be met as the world economy is threatened by governments taking drastic measures to contain the outbreak, including quarantines, travel bans and closures of public spaces.

“(The coronavirus) is likely to be a huge distraction for both governments,” said Steve Tsang, head of the China Institute at the School of Oriental and African Studies in London.

Global markets have plummeted, oil prices have slid, and the International Monetary Fund warned this week that 2020 growth will drop below last year’s 2.9 percent under “any scenario”.

“I would be surprised if they can now fulfil the terms of the phase one deal,” said Tsang.

Huge waves of business closures have not only disrupted China’s consumer spending and manufacturing but also the world’s supply chains.

Companies told AFP the past year has brought disarray first from the trade war, then the virus outbreak.

Qingzhou Ruiyuan Trading Company restarted importing soybeans from the United States this month, but sales were down at least 20 percent from last year, said the general manager surnamed Li.

He was uncertain how quickly they would be able to boost business once the health crisis is over.

“We’re affected by the epidemic, and the impact is rather big,” Li said, blaming a drop in domestic demand.

“We can’t control the market.”

China’s exports plummeted in the first two months of this year on the back of the new coronavirus, falling 17.2 percent from a year ago, while imports slipped 4.0 percent.

China has agreed to buy more US farm commodities and seafood, manufactured goods such as aircraft, machinery and steel, and energy products.

But there are provisions “to allow a delay in compliance, and both nations are likely to accept this, given the global nature of the coronavirus outbreak,” Green added.

“There is now no chance of China fulfilling its import targets within the timeframe set by the text of the agreement.”

The US economy is also taking a hit from the virus, with the government introducing sweeping restrictions on arrivals from Europe and huge stock market falls.

Diplomatic tensions between the US and China have also flared up during the outbreak.

The two countries have also sparred over the pandemic, with a US ban on arrivals from China angering Beijing.

More recently, Washington blamed Beijing for the disease and China — where the virus was first detected in December — promoted conspiracy theories that it started in the United States.

“I doubt that either has considered fully the implications (that) the measures taken to counter the spread of the virus have for their bilateral relations,” said Tsang.

But he said that given the upcoming US election, President Donald Trump was unlikely to highlight any failure by China to meet all the terms of the deal.

Instead, Trump will use the agreement to score political points.

But the trade war has fuelled distrust among farmers in both countries that could undermine the deal’s success.

In the Federal Reserve’s latest “beige book” survey, some US farmers said purchases of agricultural goods by China had “not yet materialized” and expressed worries that the virus “would be used as an excuse for missing future trade targets”.

Liu Lingxue, general manager of agricultural trading firm Guangzhou Liangnian, said her profits have fallen by at least a third during the virus outbreak.

But she does not want to import sorghum and soybeans from the US.

“We would first consider other countries that have been friendlier to China,” she said.

Image: AFP / NICOLAS ASFOURI There are concerns that the conditions of a US-China trade pact will not be met as the coronavirus pandemic rocks the global economy