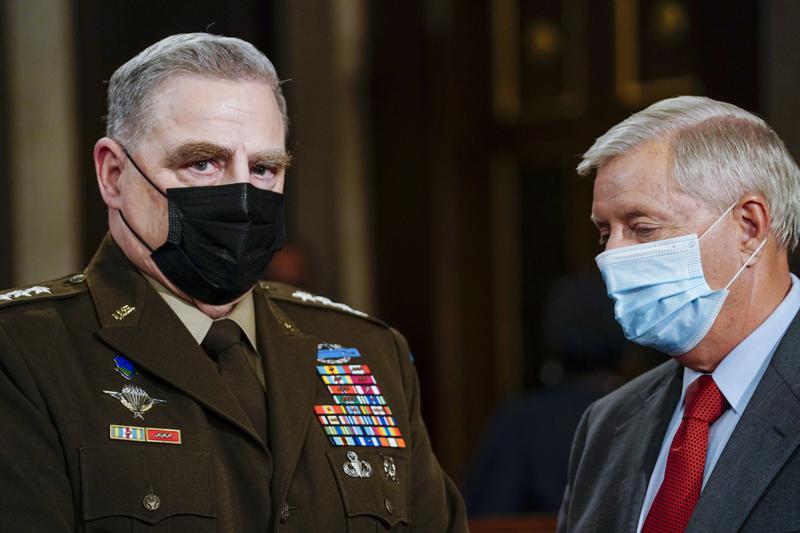 WASHINGTON (AP) — Afghan government forces face an uncertain future and, in a worst-case scenario, some “bad possible outcomes” against Taliban insurgents as the withdrawal of American and coalition troops accelerates in the coming weeks, the top U.S. military officer said Sunday.

Gen. Mark Milley described the Afghan military and police as “reasonably well equipped, reasonably well trained, reasonably well led.” He cited Afghan troops’ years of experience against a resilient insurgency, but he declined to say they are fully ready to stand up to the Taliban without direct international backing during a potential Taliban offensive.

The chairman of the Joint Chiefs of Staff, a veteran of the war in Afghanistan, spoke in an interview with Associated Press and CNN reporters flying with him from Hawaii to Washington just hours after the formal kickoff of the withdrawal.

Asked whether he believes the Afghan forces can hold up under increased strain, Milley was noncommittal.

“Which one of these options obtains and becomes reality at the end of the day? We frankly don’t know yet. We have to wait and see how things develop over the summer.”

He said there is “at least still the possibility” of a negotiated political settlement between the government in Kabul and the Taliban. This, he said, would avoid the “massive civil war” that some fear could happen.

Within about two months of the U.S.-led invasion in October 2001, the country’s Taliban rulers were removed from power and militarily defeated. But within several years, they had regrouped, rearmed and reasserted themselves, taking advantage of sanctuary in neighboring Pakistan. In recent years the Taliban achieved a battlefield stalemate with U.S.-supported Afghan government forces.

Milley noted that the Afghan military has operated in recent years with less reliance on U.S. and coalition advisers. Among the key exceptions are special operations commandos and the defense ministry.

“But for the most part, there’s no advisers out there anyway,” he said in one of his few interviews since President Joe Biden announced April 14 that all U.S. military personnel will withdraw this summer. Milley said the commonly cited total of 2,500 troops rises to 3,300 if special operations forces are counted. “We’re taking it down to zero,” he said.

After the withdrawal is over, the United States will provide unspecified “capabilities” to the Afghan military from other locations, Milley said. He did not elaborate on this, but other officials have said those “over-the-horizon” arrangements for supporting the Afghan military have yet to be solidified.

Milley said it is possible that the withdrawal will be finished before the Sept. 11 target date announced by the White House. He said that date reflects the estimated maximum amount of time needed to move all U.S. and coalition troops, as well as large amounts of equipment, out of the country.

“I don’t want to put precise dates on it,” he said.

Image: Joint Chiefs Chairman Gen. Mark Milley, left, and Sen. Lindsey Graham, R-S.C., talk as they arrive the chamber ahead of President Joe Biden speaking to a joint session of Congress, Wednesday, April 28, 2021, in the House Chamber at the U.S. Capitol in Washington. (Melina Mara/The Washington Post via AP, Pool)

Formal start of final phase of Afghan pullout by US, NATO