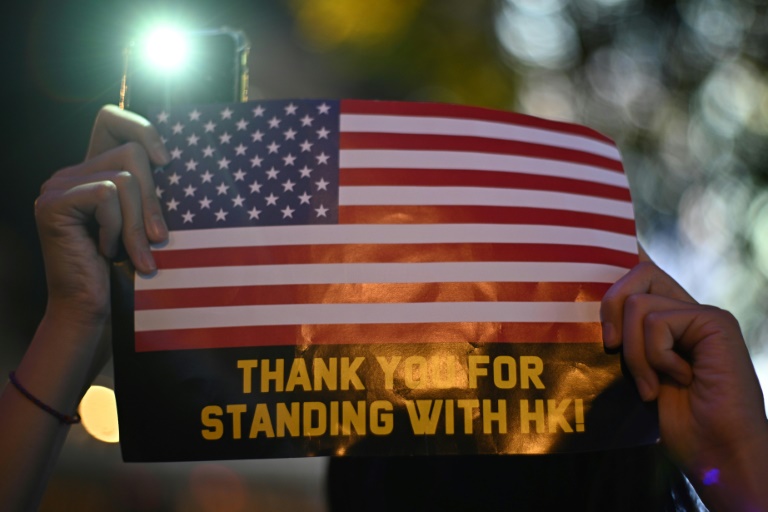 The US House of Representatives passed a bill Tuesday sought by pro-democracy protesters in Hong Kong that aims to defend civil rights in the semi-autonomous territory, prompting an angry response from China.

The Hong Kong Human Rights and Democracy Act, which will now move to the Senate before it can become law, has drawn rare bipartisan support in a polarized Congress.

The law would end the Hong Kong-US special trading status unless the State Department certifies annually that city authorities are respecting human rights and the rule of law.

China expressed “strong indignation” over the passing of the act, which also requires the US president to identify and sanction people who are responsible for the erosion of autonomy and serious abuses of human rights in Hong Kong.

“What Hong Kong faces is not the so-called human rights and democracy issue at all, but the issue of stopping violence, reinstating order and upholding the rule of law as soon as possible,” said foreign ministry spokesman Geng Shuang in a statement.

Geng said the US should “stop meddling” and warned China would take “strong measures” to counter the proposed Hong Kong bill.

The act will now move to a similar vote in the Senate before it can become law.

China has frequently accused “external forces” of fueling weeks of unrest in the global financial hub.

Millions have taken to the streets of Hong Kong, initially against a now-dropped bid by its leaders to allow extraditions to the authoritarian Chinese mainland.

The months-long movement has expanded into a broader pro-democracy push in the territory where activists say freedoms are being eroded by Beijing, despite being written into a deal the deal that governed Hong Kong’s 1997 transfer to China from British colonial rule.

“The House just sent a strong message to the people of Hong Kong: We stand with you in the fight for democracy and justice,” said Ben Ray Lujan, a House Democrat.

The House also approved, by a similar voice vote, a related bill to prohibit the export of certain non-lethal crowd control items such as tear gas to Hong Kong.

Amnesty International has accused the city’s officers of using excessive force, although the police say they have exercised restraint.

A separate house resolution called on the Hong Kong government to begin negotiations to address the demonstrators’ demands, which include universal suffrage and an independent probe into police conduct.

Prominent Hong Kong activists testified before a congressional hearing last month in support of the legislation approved by the House on Tuesday.

Image: AFP / Anthony WALLACE A protester holds a sign during a rally in Hong Kong calling on US politicians to pass Hong Kong Human Rights and Democracy Act