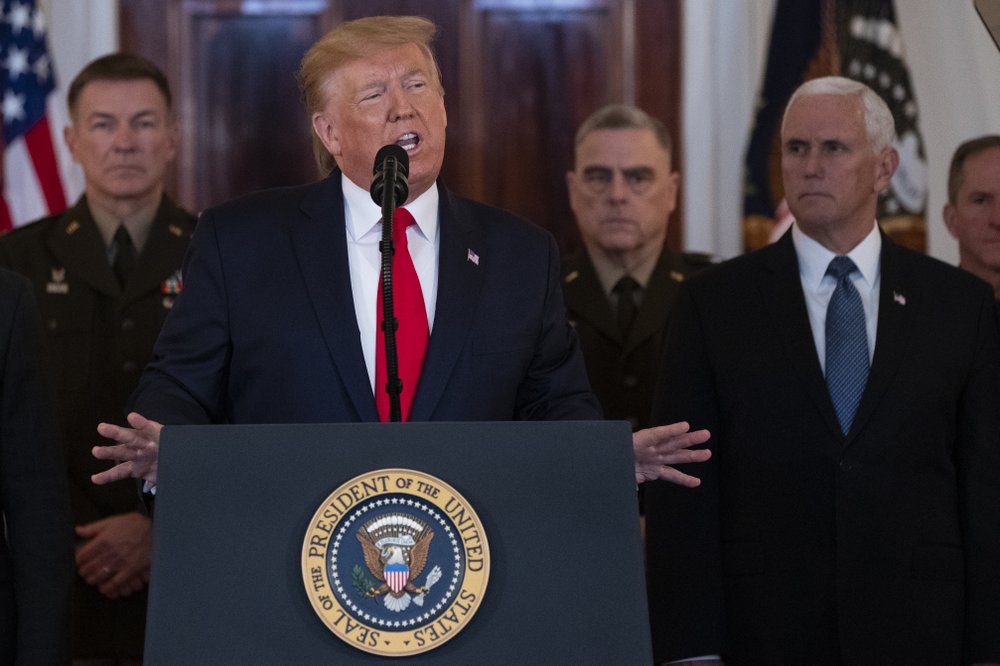 WASHINGTON (AP) — The U.S. and Iran stepped back from the brink of possible war on Wednesday as President Donald Trump signaled he would not retaliate militarily for Iran’s missile strikes on Iraqi bases housing U.S. troops. No one was harmed in the strikes, but U.S. forces in the region remained on high alert.

Speaking from the White House, Trump seemed intent on deescalating the crisis, which spiraled after he authorized the targeted killing last week of Iran’s top general, Qasem Soleimani. Iran responded overnight with its most direct assault on America since the 1979 seizure of the U.S. Embassy in Tehran, firing more than a dozen missiles at two installations in Iraq. The Pentagon said Wednesday that it believed Iran fired with the intent to kill.

Even so, Trump’s takeaway was that “Iran appears to be standing down, which is a good thing for all parties concerned and a very good thing for the world.”

Despite such conciliatory talk, the region remained on edge, and American troops including a quick-reaction force dispatched over the weekend, were on high alert. Last week Iranian-backed militia besieged the U.S. Embassy in Baghdad, and Tehran’s proxies in the region remain able to carry out attacks such as the one on Dec. 27 that killed a U.S. contractor and set off the most recent round of hostilities.

Hours after Trump spoke, an ‘incoming’ siren went off in Baghdad’s Green Zone after what seemed to be small rockets “impacted” the diplomatic area, a Western official said. There were no reports of casualties.

Gen. Mark Milley, the chairman of the Joint Chiefs of Staff, warned that it was “perhaps too early to tell” if Iran will be satisfied that the missile strikes were sufficient to avenge the Soleimani killing.

“We should have some expectation,” Defense Secretary Mark Esper added in a Wednesday briefing, “that Shiite militia groups, either directed or not directed by Iran, will continue in some way, shape or form to try and undermine our presence there,” either politically or militarily.

There is no obvious path to diplomatic engagement, as Trump pledged to add to his “maximum pressure” campaign of economic sanctions. He said the new, unspecified sanctions would remain in place “until Iran changes its behavior.”

“Last night they received a slap,” Khamenei said. “These military actions are not sufficient (for revenge). What is important is that the corrupt presence of America in this region comes to an end.”

Trump, facing perhaps the biggest test of his presidency, credited the minimized damage to an early warning system “that worked very well” and said Americans should be “extremely grateful and happy” with the outcome.

The strikes had pushed Tehran and Washington perilously close to all-out conflict and left the world waiting to see whether the American president would respond with more military force. Trump, in his nine-minute, televised address, spoke of a robust U.S. military with missiles that are “big, powerful, accurate, lethal and fast.” But then he added: “We do not want to use it.”

Iran for days had been promising to respond forcefully to Soleimani’s killing, but its limited strike on two bases — one in the northern Iraqi city in Irbil and the other at Ain al-Asad in western Iraq — appeared to signal that it, too, was uninterested in a wider clash with the U.S. Foreign Minister Mohammad Javad Zarif tweeted that the country had “concluded proportionate measures in self-defense.”

Trump, who is facing reelection in November, campaigned for president on a promise to extract the United States from “endless wars.”

On Wednesday, he said the United States was “ready to embrace peace with all who seek it.” That marked a sharp change in tone from his warning a day earlier that “if Iran does anything that they shouldn’t be doing, they’re going to be suffering the consequences, and very strongly.”

Members of Congress were briefed on the Iran situation Wednesday afternoon in closed-door sessions on Capitol Hill, where Democrats and some Republicans expressed dissatisfaction with the administration’s justifications for the drone strike on Soleimani.

Republican Sen. Mike Lee of Utah said it was “probably the worst briefing I’ve seen, at least on a military issue, in the nine years I’ve served in the United States Senate.” He said it was “distressing” that officials suggested it would only embolden Iran if lawmakers debated the merits of further military action. He and Sen. Rand Paul announced their support of a largely symbolic war powers resolution to limit Trump’s military action regarding Iran.

Democratic Speaker Nancy Pelosi announced after the briefing that the House would vote Thursday on a war powers resolution of its own.

Trump opened his remarks at the White House by reiterating his promise that “Iran will never be allowed to have a nuclear weapon.” Iran had announced in the wake of Soleimani’s killing that it would no longer comply with any of the limits on uranium enrichment in the 2015 nuclear deal crafted to keep it from building a nuclear device.

The president, who had earlier pulled the U.S. out of the deal, seized on the moment of calm to call for negotiations toward a new agreement that would do more to limit Iran’s ballistic missile programs and constrain regional proxy campaigns like those led by Soleimani.

Trump also announced he would ask NATO to become “much more involved in the Middle East process.” While he has frequently criticized NATO as obsolete and has encouraged participants to increase their military spending, Trump has tried to push the military alliance to refocus its efforts on modern threats.

Like the U.S. troops in the region, NATO forces have temporarily halted their training of Iraqi forces and their work to combat the Islamic State.

Soleimani’s death last week in an American drone strike in Baghdad prompted angry calls for vengeance and drew massive crowds of Iranians to the streets to mourn him. Khamenei himself wept at the funeral in a sign of his bond with the commander.

Milley and Esper told reporters that a total of 16 missiles were fired from three locations in Iran. Eleven hit the Ain al-Asad air base in Iraq’s western Anbar province and one targeted a base in Irbil in Iraq’s semi-autonomous Kurdish region. The missiles were described as likely short-range with 1,000- to 2,000-pound warheads. Four failed to detonate, they said.

Milley added that the Pentagon believes that Iran fired the missiles with the intent “to kill personnel.” He praised early warning systems, which detected the incoming ballistic missiles well in advance, providing U.S. and coalition forces adequate time to take shelter at both bases. He described the damage to tents, parking lots and a helicopter, among other things, as “nothing major.”

Officials also said that the U.S. was aware of preparations for the attack. It’s unclear if any intelligence identified specific targets or was more general.

Ain al-Asad was first used by American forces after the 2003 U.S.-led invasion that toppled dictator Saddam Hussein, and it later was used by American troops in the fight against the Islamic State group. It houses about 1,500 U.S. and coalition forces. Trump visited it in December 2018, making his first presidential visit to troops in the region. Vice President Mike Pence visited both Ain al-Asad and Irbil in November.

Trump spoke of new sanctions on Iran, but it was not immediately clear what those would be. The primary agencies involved in implementing such penalties – the departments of Commerce, State and Treasury – do not preview those actions to prevent evasion.

Since withdrawing from the 2015 nuclear deal, the administration had already imposed harsh sanctions on nearly every significant portion of Iran’s economic, energy, shipping and military sectors.

The fallout for Trump’s order to kill Soleimani had been swift.

Iraq’s Parliament voted to expel U.S. troops from Iraq, though Trump said they would not be leaving.

Trump and top national security officials have justified the Soleimani drone strike with general statements about the threat posed by the general, who commanded proxy forces outside Iran and was responsible for the deaths of American troops in Iraq.

EU promises to try to save Iran nuclear deal despite setback