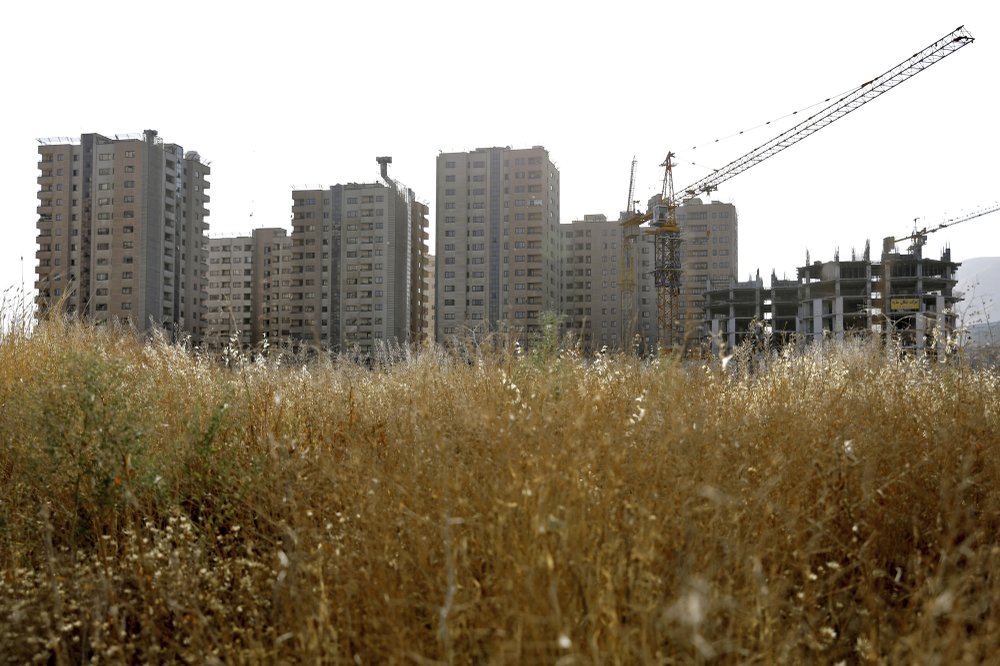 TEHRAN, Iran (AP) — Stay-at-home mom Maryam Alidadi used to lead a comfortable middle-class life. The 35-year-old and her husband, a mechanic, could afford a spacious rental apartment in a central neighborhood of Tehran, along with a car, occasional restaurant meals and holidays abroad.

Now they are barely hanging on, even after drastically cutting spending.

Like most Iranians, the family was hit hard by the collapse of the national currency, accelerating inflation and eroding wages — fallout from unprecedented U.S. sanctions.

Perhaps most devastating for Iran’s large middle class has been the sharp spike in housing prices, more than double in a year. That has uprooted tenants and made home ownership unattainable for most. 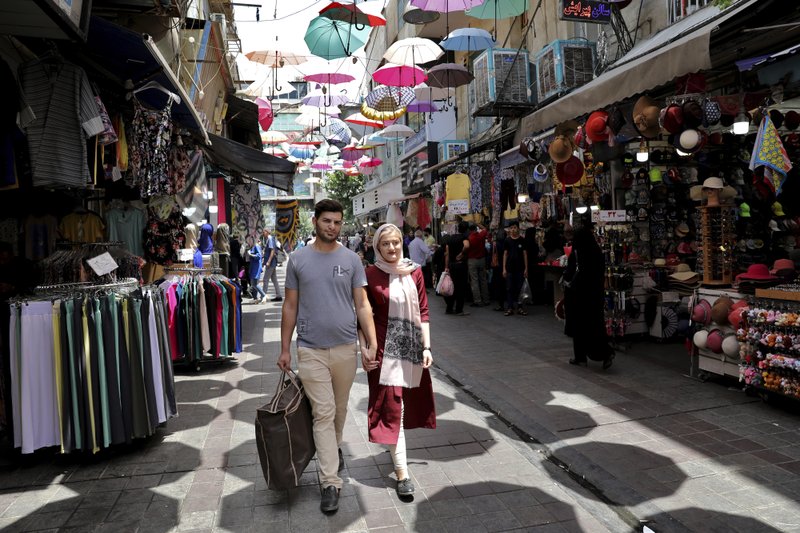 The Alidadis sold their car and borrowed from friends and family to buy a smaller apartment in a less desirable area on the outskirts of Tehran — in hindsight a smart move, since they’ve been priced out of their old neighborhood by now.

“Right now, this is the most difficult period ever,” said Alidadi’s 58-year-old mother, Shahla Allahverdi, reflecting on the Islamic Republic’s 40-year history as she shared a park bench with her daughter.

Iranians worry about the future as tensions between Iran and the West continue to rise. 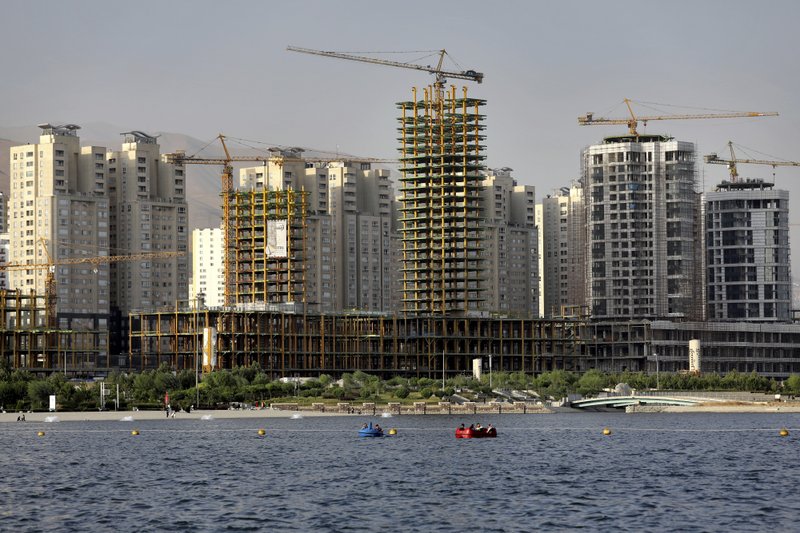 The showdown between Washington and Tehran has upended the lives of Iranians as they try to survive on less. A bride borrowed a wedding dress because she couldn’t afford to buy or even rent one. More newlyweds move in with their families to save money. Visa requests are up at foreign embassies, with young Iranians eager to leave.

Some wonder how far Washington is willing to push its “maximum pressure” campaign.

The Trump administration says the sanctions are aimed at getting Iran to renegotiate the nuclear deal, which offered sanctions relief in exchange for curbs on Iran’s nuclear program.

Washington denies its ultimate aim is to end the rule of Shiite Muslim clerics — though John Bolton, an architect of the pressure campaign, called for regime change before he became Trump’s national security adviser.

Some say Washington’s actions appear to have strengthened the paramilitary Revolutionary Guard and other hard-liners at the expense of President Hassan Rouhani, once the nuclear deal’s most prominent champion.

The Guard has been able to deepen its role in the economy, domestic politics and foreign policy under the guise of security, said Ellie Geranmayeh, a senior fellow at the European Council on Foreign Relations.

Despite the economic upheaval, there have only been sporadic protests.

Iran analyst Adnan Tabatabai said he believes Iranians are “reluctant to take their grievances to the street” for now, amid fear of further chaos and pushback by the authorities.

The housing and construction sector, which makes up about one-quarter of the economy and is the top destination for savings and investments, has been thrown out of balance.

Property owners are reluctant to sell and landlords are sharply raising rents because of the currency collapse, said Ali Dadpay, a finance professor at the University of Dallas. He said an estimated 490,000 homes stand empty in and around the capital, including more than 40,000 units added this year.

At the same time, construction lags far behind the need of 1.2 million new homes a year nationwide, said Hesam Oghabaei, deputy head of the Tehran association of real estate agents. He said about 25% of Tehran’s residents live in rented apartments, and the vast majority cannot afford the price increases.

The Peyman family — elderly parents and eight adult children — own a 110 square meter (1,180 square feet) apartment in Tehran’s District 12, a poor area plagued by drug addiction and other social problems. More than a decade ago, the Peymans rented the apartment, and used the extra income to move to a nicer area.

Now they are back in District 12, renovating the old apartment after being squeezed out of the good neighborhood by a rent hike.

“We have to come here because we have no other choice,” said the patriarch, Moslem, 65. Four unmarried children will live with him and his wife. Across-the-board price increases put marriage out of reach.

One of Tehran’s newest areas, District 22, is under construction on the northwestern edge of the city. It consists of apartment high-rises and shopping malls arranged around an artificial lake called Chitgar.

Maryam Alidadi and her husband bought an 82-square-meter (880 square feet) apartment here in December, downsizing by a third from their rented home in a more affluent area.

“Our standard of living has dropped considerably,” she said, adding that she now regrets having quit her government job four years ago when her son Rami was born.

The U.S. sanctions have proven particularly devastating for Iran’s large middle class, said Dadpay, the finance professor. “This is the economic class that depends on the global economy, depends on their skillsets, and most of them are earning fixed incomes,” he said.

The economic freefall could shape Iran’s domestic politics, with parliament elections in February posing the first test. Middle class voters have traditionally favored reformist candidates but might sit out voting because of a lack of alternatives, inadvertently boosting hard-liners.

Pro-reform politicians who favor a greater opening to the West are closely linked to the nuclear deal.

With the deal faltering, the hard-liners, including the Revolutionary Guard, are becoming more entrenched, said Geranmayeh, the analyst.

The Guard, she said, “is going to be a force to be reckoned with for many years to come.”

By KARIN LAUB and MOHAMMAD NASIRI

This July 6, 2019 photo shows residential towers in District 22, that consists of apartment high-rises and shopping malls arranged around an artificial lake called Chitgar, under construction on the northwestern edge of Tehran, Iran. Iran’s large middle class has been hit hard by the fallout from unprecedented U.S. sanctions, including the collapse of the national currency. Perhaps most devastating has been the doubling of housing prices. The spike has uprooted tenants and made home ownership unattainable for most. (AP Photo/Ebrahim Noroozi)