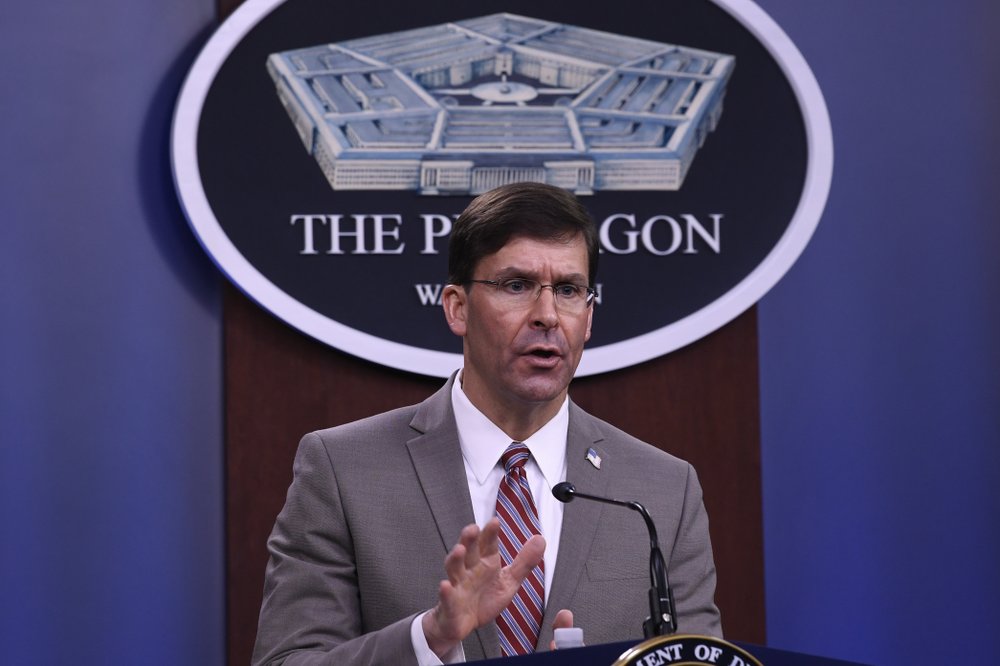 WASHINGTON (AP) — The U.S. launched airstrikes Thursday in Iraq, targeting the Iranian-backed Shia militia members believed responsible for the rocket attack that killed and wounded American and British troops at a base north of Baghdad, the Pentagon said.

The strikes marked a rapid escalation in tensions with Tehran and its proxy groups in Iraq, just two months after Iran carried out a massive ballistic missile attack against American troops at a base in Iraq. They came just hours after top U.S. defense leaders threatened retaliation for the Wednesday rocket attack, making clear that they knew who did it and that the attackers would be held accountable.

“The United States will not tolerate attacks against our people, our interests, or our allies,” Defense Secretary Mark Esper said. “As we have demonstrated in recent months, we will take any action necessary to protect our forces in Iraq and the region.”

The Pentagon statement said the facilities hit in the precision strikes were used to store weapons used to target the U.S. and coalition forces. It called the counterattack “defensive, proportional and in direct response to the threat” posed by the Iranian-backed Shiite militia groups.

U.S. officials said the locations of the strikes were largely around the Baghdad region. One U.S. official said there were two strikes at Jurf al-Sakher, one in Karbala, one at Al-Musayib, and one at Arab Nawar Ahmad. The official said the U.S. expected casualties would be lower than 50, and said the main effort was to hit the weapons.

The officials spoke on condition of anonymity because some details about the operations had not yet been made public.

An official with the paramilitary Popular Mobilization Units told The Associated Press that two Iraqi federal police personnel were killed in Jurf al-Sakher. An Iraqi military statement said the aerial “aggression” occurred at 1:15 a.m. in the areas of Jurf al-Sakher, Al-Musayib, Najaf and Alexandria on the headquarters of the Popular Mobilization Units, emergency regiments and commandos of the 9th division of the Iraqi army.

Esper told reporters at the Pentagon earlier Thursday that President Donald Trump had given him the authority to take whatever action he deemed necessary.

“We’re going to take this one step at a time, but we’ve got to hold the perpetrators accountable,” Esper said. “You don’t get to shoot at our bases and kill and wound Americans and get away with it.”

At the White House, Trump had also hinted that a U.S. counterpunch could be coming, telling reporters, “We’ll see what the response is.” And Army Gen. Mark Milley, chairman of the Joint Chiefs of Staff, told Pentagon reporters the U.S. knows ”with a high degree of certainty” who launched the attack.

On Capitol Hill earlier in the day, Marine Gen. Frank McKenzie, the top U.S. commander for the Middle East, told senators the deaths of U.S. and coalition troops created a “red line” for the U.S., but said he didn’t think Iran has “a good understanding of where our red line is.”

Asked if any counterattack could include a strike inside Iran, Esper said, “We are focused on the group that we believe perpetrated this in Iraq.”

Two U.S. troops and one British service member were killed and 14 other personnel were wounded when 18 rockets hit the base Wednesday. The U.S. military said the 107 mm Katyusha rockets were fired from a truck launcher that was found by Iraqi security forces near the base after the attack.

U.S. officials have not publicly said what group they believe launched the rocket attack, but Kataeb Hezbollah, an Iranian-backed Shiite militia group, was the likely perpetrator. And the U.S. strikes, which came in the middle of the night in Iraq, targeted that group.

Kataeb Hezbollah was responsible for a late December rocket attack on a military base in Kirkuk that killed a U.S. contractor, prompting American military strikes in response.

That in turn led to protests at the U.S. Embassy in Baghdad. They were followed Jan. 3 by a U.S. airstrike that killed Iran’s most powerful military officer, Gen. Qassem Soleimani, and Abu Mahdi al-Muhandis, a leader of the Iran-backed militias in Iraq, of which Kataeb Hezbollah is a member. In response to the Soleimani killing, Iran launched a massive ballistic missile attack on Jan. 8, at al-Asad air base in Iraq, that resulted in traumatic brain injuries to more than 100 American troops.

McKenzie told the Senate Armed Services Committee on Thursday morning that the killing of Soleimani and the increase in U.S. troops and assets in the region has made clear to Iran that the U.S. will defend its interests there. He said the U.S. has re-established a level of deterrence for state-on-state attacks by Iran.

However, he said: “What has not been changed is their continuing desire to operate through their proxies indirectly again us. That is a far more difficult area to deter.”

On Thursday, Esper and Milley said they spoke with their British counterparts about the attack, but declined to provide details.

Asked why none of the rockets was intercepted, Milley said there are no systems on the base capable of defending against that type of attack.

He also said the 14 injured personnel were a mix of U.S. and allied troops as well as contractors, and they will also be monitored for possible traumatic brain injury in the wake of the blasts.

US, UK troops among 3 dead in Iraq rocket attack as US-led coalition responds