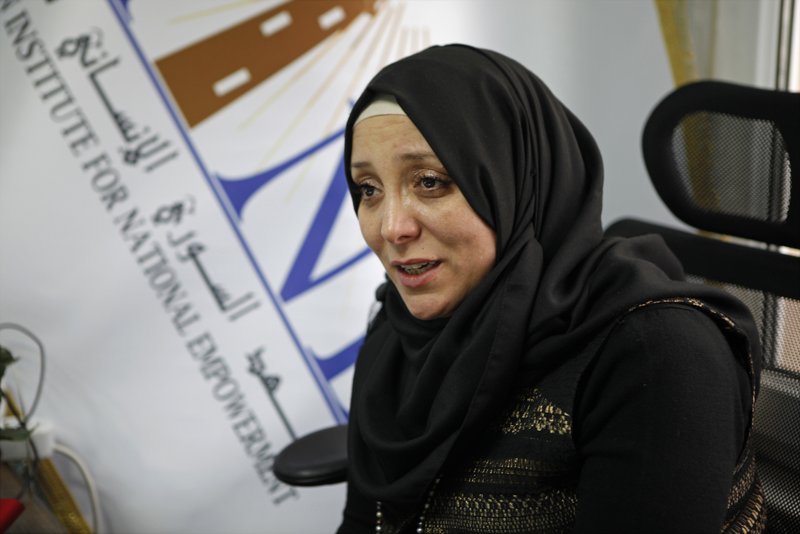 When Syria’s uprising broke out, Rania Kisar left her job in the United States and returned home to join what she dreamed would be the ouster of President Bashar Assad and the building of a new Syria. Her main focus these days has been to keep Islamic militants from taking over the dream.

Syrian-American Kisar runs a school in the last main enclave in Syria held by the opposition, the northwestern province of Idlib. The strongest power in the territory is Al-Qaeda’s affiliate, and it is increasingly intervening in day-to-day affairs of administering the province. That means Kisar has had to become adept in maneuvering to keep her school running.

Sometimes that means finding ways around, sometimes it means pushing back. Throughout, she knows why the militants keep trying to get their way: “If they don’t interfere, they won’t be considered powerful.”

Al-Qaeda’s branch leads an alliance of factions known as Hayat Fatah al-Sham that dominates the opposition administration running Idlib. But the group has to tread carefully, balancing between its aim to control and its wariness of triggering a backlash from residents and other factions. So far, it has stayed relatively pragmatic: it takes every opportunity to show it is in charge but has shown no interest in a wide-scale imposition of an extremist vision of Islamic law.

They halted public killings of criminals; there are no religious police patrolling streets, arresting or beating people, and they haven’t forced women to wear the niqab face veil.

That is a sharp contrast to the Islamic State group in the stretches of Syria and Iraq where the rival militant group has ruled the past three years.

Instead, Al-Qaeda administrators and fighters try to enforce some rules on a smaller scale while avoiding heavy-handed confrontation and presenting themselves as the champions of Syria’s “revolution” against Assad.

Idlib now stands in a tenuous position among the international and regional powers that are effectively carving up Syria. Assad’s Russian-backed military is focused on fighting Islamic States militants further to the east, as are the United States and its Kurdish led-allies. Turkey and its allies have seized a pocket of territory neighboring Idlib. Eventually, all these forces will turn their attention to the fate of the opposition enclave.

In the meantime, Idlib, swelling with more than 900,000 Syrians displaced from fallen rebel enclaves elsewhere, is the refuge of an opposition movement that only a few years earlier appeared to have the momentum in the conflict.

Now Kisar and others like her are trying to keep Al-Qaeda’s influence at bay.

“Everyone sold us out,” she said in a recent interview in her office in Istanbul, where she regularly travels.

Kisar said the international community’s fear of radical Islamists taking over Syria is exaggerated and reflects a lack of understanding of the Syrian opposition. She and others argue that the militants are needed, they provide services and infrastructure as well as skilled fighters for now, but will not have support later.

From the start, Kisar has been a true believer in the uprising. After the revolt began in 2011, she left her administrative job at a Dallas university and joined the opposition.

She traveled with fighters on the front lines, helping displaced people. She organized services in opposition territories. Along the way, she survived an airstrike and lost a colleague who was kidnapped by Islamic State group militants and was later believed killed.

Finally, she settled in Maaret al-Numan, Idlib’s second largest city. It was one of the few strongholds of the moderate Free Syrian Army, the umbrella group for the internationally-backed opposition factions. In recent years, radical factions like Al-Qaeda have grown in influence and gained a foothold. But Maaret’s residents largely continued to support the FSA. They held repeated protests whenever al-Qaida fighters went too far, arresting journalists or cracking down on opponents.

In 2015, Kisar launched her foundation, SHINE, or the Syrian Humanitarian Institute for National Empowerment.

It provides classes for adults in computers, programming and web design. Registered in Dallas and funded by donations from Turkey and private citizens in America and elsewhere, the foundation has so far graduated 237 students.

Kisar takes great pride in the result: a “geek squad” of tech-savvy men and women who can fix smart phones and computers. That is vital in opposition-held areas, where there are no telephone lines and the population relies on satellite internet for communication.

Her first brush with the militants came when she had to explain her work to gain accreditation from the bureaucracy they control.

She bickered with one official, arguing that armed groups should not control civilian affairs. He wouldn’t look her in the eye since she’s a woman. But “when he heard I am from America, he said: ‘We have every honor that an American Muslim is here and wants to be here’,” she recalled.

Even in heated debates with the militants, she said, she has always kept a respectful tone, something that has helped keep her operating.

It also helps that she is a woman. “I can get away with a lot of things,” she said with her characteristic giggle. “There is a lot more leniency toward me because I am a woman.”

The ultraconservative militants were concerned that SHINE provides classes for men and women. So she kept it going by segregating the space, men on the bottom floor, women on the top. When airstrikes hit the top floor, she set up separate areas on the ground floor.

Before graduation, an inspector told her not to play music at the ceremony. She argued back. Then on graduation day, the ceremony started with a nod to tradition with a Quranic recital in line with the inspector’s wishes.

But as the students filed out in front of an audience of relatives and local officials, Kisar played an anthem. It was a calculated gamble: she was betting the militants would not make a scene.

“It was matter-of-fact. They did nothing,” she said.

Even as it interferes more in administration of opposition-held areas, Al-Qaeda’s affiliate is struggling between its identity as a hard-line jihadi movement and its ambition to lead the rebellion with its variety of factions, wrote another Syria watcher, Mona Alami in a recent Atlantic Council article.

When that balancing act breaks down, violence can explode.

In June, Maaret al-Numan was shaken when pitched street battles erupted between Al-Qaeda militants and the FSA, bringing gruesome revenge killings and leaving at least six civilians dead. HTS fighters opened fire on residents protesting against their presence in the streets.

For a moment, the chaos seemed to shatter Kisar’s spirit. “It is going to break loose,” she said over the phone at the time. “Everybody is fighting everybody.”

She left town for several days to “breathe.”

Eventually, calm was restored with a shaky reconciliation, though one that increased the militants’ influence: the FSA faction running the town had to leave their offices, replaced by an agency linked to Al-Qaeda.

Kisar resumed her work, and her own balancing act. This time, she was preparing festivities for local children to celebrate a major Muslim holiday.

“You must check out the videos,” she said, giggling. “It is like Disneyland. It is SHINEland. It is majestic.”